Mum’s the word on high-level ‘war on lead’ summit 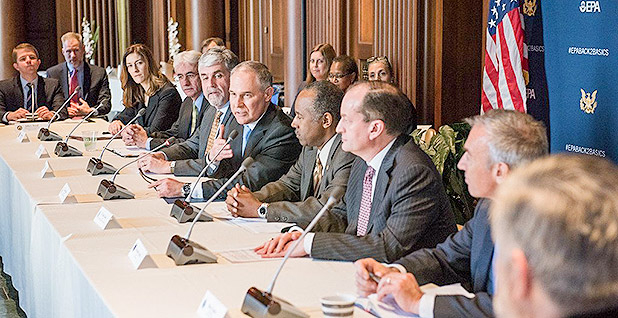 What did they do? Hard to say.

Multiple EPA staffers who work on lead issues and officials from other agencies whose work is related to the health risks of the potent neurotoxin say they know little about last Thursday’s meeting of the President’s Task Force on Environmental Health Risks and Safety Risks to Children. And aides who normally attend meetings of the task force say they weren’t invited.

"At this point, I know what you know," an EPA staffer told E&E News. "I’ll probably learn more when I read your article."

Pruitt has talked up EPA’s efforts to combat lead contamination since telling House lawmakers in December that he wants to wage a "war on lead" in 2018.

The task force meeting was an extension of that effort, with Pruitt inviting Cabinet officials to EPA, asking them to come "prepared to consider actions that the federal partners may undertake over the next one to three years to further reduce childhood lead exposures and eliminate associated health impacts."

But while EPA promoted the meeting, releasing a copy of Pruitt’s invitation to Cabinet members, the agency has said little about what occurred at the meeting.

Formed in 1997 by executive order from President Clinton, the task force is co-chaired by the heads of EPA and the Department of Health and Human Services, with membership consisting of other Cabinet members. But administrators rarely attend the meetings, sending lower-level career employees who work on public and children’s health issues in their stead. Those lower-level employees are divided into working groups on public health topics like lead or asthma.

Pruitt’s meeting last week was unusual in that it included political appointees, including the deputy secretaries for Agriculture and HHS and Associate Attorney General Rachel Brand.

An EPA spokesman said "career EPA officials who regularly attend Lead Working Group meetings were also in attendance, as well as senior leaders from key EPA programs that will contribute" to a draft federal strategy the working group has written.

The spokesman didn’t identify which employees attended the meetings.

Lead Working Group members from multiple agencies asked about the meeting by E&E News said they hadn’t been invited and were unsure whether any members had.

"We are still waiting for guidance from political higher-ups," said one member, who noted the Lead Working Group is currently working to finalize a lead strategy for the federal government.

Said another member, "I heard it went well, but they didn’t give us any details."

Michelle Mabson, who was an EPA fellow serving on the working group until she joined Earthjustice this summer, said she couldn’t recall a task force meeting that excluded working group members during her two years at EPA.

EPA employees not on the working group who work on lead-related issues said they were also in the dark about what happened at the meeting.

"We haven’t heard anything tangible on this or anything else about the ‘war on lead,’" one said.

After the meeting, EPA issued a press release celebrating the progress made there.

"Lead exposure poses a significant health threat to hundreds of thousands of American children," Pruitt said in a statement. "By refocusing Agency efforts, we can work with our government partners to develop solutions that address lead exposure and improve health outcomes for children."

The release didn’t say what those five goals are, but a spokesman later said they were to reduce sources of lead in children’s environment; improve identification and monitoring of lead exposure to children; improve the health of children identified as lead-exposed; communicate effectively and consistently with stakeholders about childhood lead exposure; and plan cross-federal research to advance scientific understanding of the effects, evaluation and control of lead hazards in children’s environments.

EPA has proposed cuts to multiple lead-related programs that could help with that effort.

President Trump’s proposed fiscal 2018 budget would, for example, eliminate the Lead Risk Reduction Program, which works to reduce the number of children with blood lead levels of 5 micrograms per deciliter or higher. Other cuts to lead research programs are also proposed (Greenwire, Feb. 13).

Those programs were included in a 2016 report from the task force on federal programs key to reducing lead exposure that EPA has called the "foundation" of the lead-fighting strategy the task force is now working to finalize by June.

Asked how the proposed cuts would affect the task force’s goals, the EPA spokesman said "EPA has been working with task force members both within EPA and among other federal agencies to identify key actions and future opportunities."