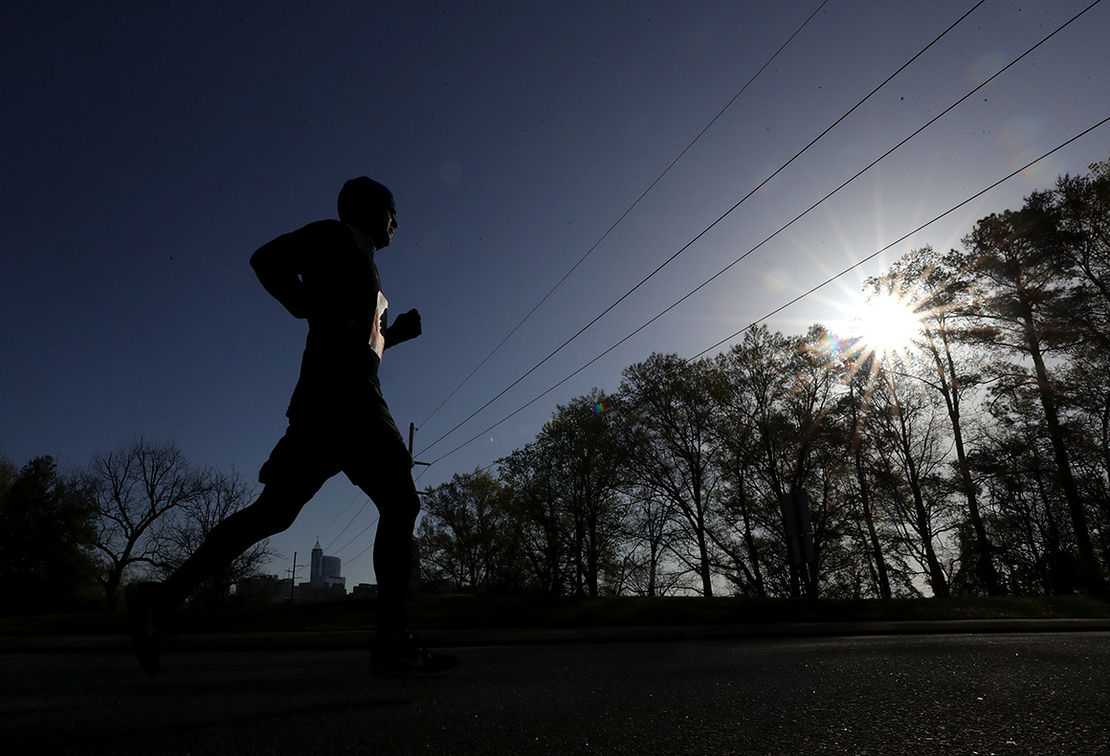 The sun peeks through a row of trees in Raleigh, N.C., as a runner catches his stride. North Carolina state lawmakers want to make it harder for local officials to protect tree canopies. Streeter Lecka/Getty Images for Rock 'N' Roll Marathon

City and county officials in North Carolina would be barred from passing local tree ordinances without first getting the approval of state lawmakers under a provision added by Republicans to the state’s pending budget bill.

The proposal has sparked opposition from municipalities and environmentalists, who said the GOP measure would result in lost tree canopy. They warned that a loss of tree shade would prove problematic in a fast-growing state where rising average temperatures and extreme heat events are stressing both urban and rural communities.

The fate of the tree provision, along with the rest of the state budget, could be decided in a matter of weeks.

"North Carolina is losing urban tree cover that provides shade during increasingly hot summers, lessens the impact of stormwater runoff and improves the aesthetic beauty of neighborhoods," Cynthia Satterfield, state director of the North Carolina Sierra Club, wrote in an email. "We should be helping, not hindering, local efforts to protect trees."

The tree provision is one small piece of a much larger negotiation between Democratic Gov. Roy Cooper and Republican leaders in the GOP-controlled Statehouse. The governor and Legislature didn’t agree to budgets in 2019 or 2020, according to The News & Observer. North Carolina’s governor does not have the power of a line-item veto.

Cooper in the past has opposed efforts to restrict the power of local officials. “The Governor has concerns about this provision and has opposed weakening local governments when it comes to these kinds of ordinances,” Jordan Monaghan, Cooper’s press secretary, wrote in an email.

Other environmental provisions in the budget bill would bar all local stormwater ordinances and riparian buffer protections not required by federal or state law, and loosen regulations on the billboard advertising industry.

Karen Alexander, mayor of Salisbury, N.C., and president of the North Carolina League of Municipalities, urged the governor to oppose “these non-budgetary policy provisions, which will harm the ability of local residents to make decisions through their locally elected officials to best serve their local needs.”

Sponsors of the tree ordinance measure say it is not anti-tree.

Rather, it’s a “procedural measure” meant to keep local governments from passing ordinances without approval from state lawmakers, as required by the state constitution and other statutes, said Oliver Fleming, an assistant to Republican Rep. James Boles Jr.

Boles is deputy majority whip of the North Carolina House of Representatives and a key supporter of the measure.

“It’s not like it’s a grand gesture from the General Assembly to allow people to clear-cut trees on their property," Fleming added. "It’s about keeping everyone in check and making sure there’s no new local ordinances without legislative approval.”

But Scott Mooneyham, a spokesman for the League of Municipalities, argued that the tree ordinance bill and other legislative efforts are part of a broader push among Republican lawmakers to strip regulatory authority from local governments.

“There have been local tree ordinances for decades in North Carolina, so if there were a problem with anything related to the constitutionality of those, we know there are litigious homebuilders out there who would have filed lawsuits if that were the case,” he said. "This is clearly one of many efforts that we’ve seen before where the exercise of democracy at the local level is somehow judged to be illegitimate.”

Fleming said the legislation was backed by private property owners concerned about over-regulation. He said such concerns have mounted over the past decade as dozens of municipalities adopted tree ordinances without the Legislature’s consent.

Others contend it was pushed by developers in Boles’ district, a growing region centered on Moore County west of Fayetteville. The area is home to the legendary Pinehurst Resort, which boasts nine world-class golf courses as well as numerous other private clubs and golf courses.

Fleming estimated between 25 and 50 local tree ordinances would be affected by the measure. Tree ordinances in large urban municipalities such as Raleigh would be unaffected because they were approved by the Legislature.