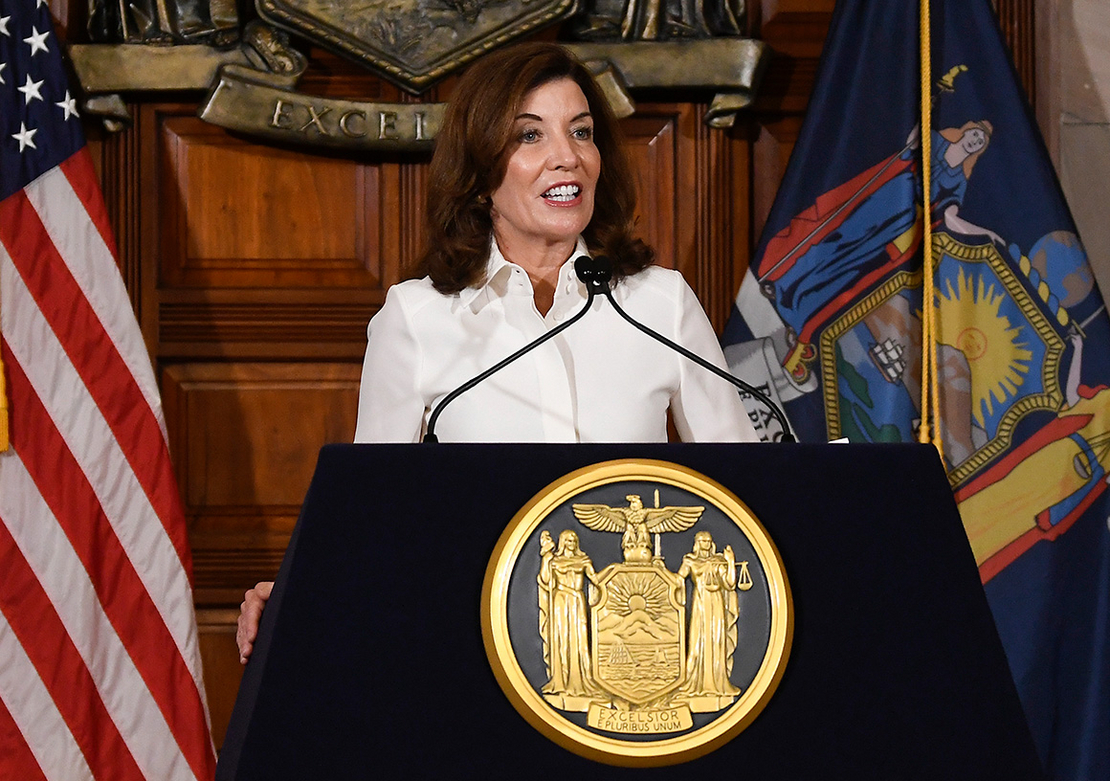 New York’s Democratic governor announced her backing yesterday for what would be the nation’s first statewide gas ban for new buildings, adding fuel to a simmering national battle.

Gov. Kathy Hochul’s support for a gas ban came through a 2022 policy blueprint released before her first State of the State address. Hochul took the reins from former Gov. Andrew Cuomo (D) in November after he resigned amid allegations of sexual harassment.

A statewide natural gas ban would raise the national bar for climate action for buildings, a top source of emissions and an area where state-level policymakers can exert an unusual degree of influence. While Hochul’s backing doesn’t guarantee a ban will become law, it will likely add momentum to similar plans already under consideration in the Democrat-controlled Legislature. It came as part of a flurry of announcements on clean energy, including a half-billion dollars in investments for offshore wind.

The blueprint calls for the state to pass legislation requiring all new buildings to use zero-emissions sources of heat by 2027. In practice, that would mostly require them to use electricity rather than fossil fuels, and it would follow in the footsteps of New York City, which became the largest U.S. city in December to ban the use of fossil fuels for building heat (Energywire, Dec. 15, 2021).

The 2027 target "sends an unmistakable signal to the New York market, the nation, and the world that the future of buildings must be decarbonized," the blueprint said.

Hochul also laid out a new target of electrifying 2 million homes by 2030, which would entail a tenfold increase in the current rate of adoption of electric heat. At least 800,000 of the homes under the plan would house low- and moderate-income New Yorkers.

"To make real progress on climate change, it’s time to tackle major sources of pollution head-on, ensure greener housing is available to all New Yorkers, and pave the way toward a more sustainable future," Hochul said in a post-speech statement. "This transformative investment in green infrastructure will cement New York’s status at the forefront of climate action and ensure equity in our transition to a cleaner, greener state."

In New York, nearly a third of all greenhouse gas emissions trace to buildings, much of it from burning fossil fuels on site for warmth. That has made the sector a target for climate planners, who must figure out how to comply with a 2019 state law mandating a carbon-free grid by 2040 and net-zero emissions by 2050.

Yet Hochul’s promise to back gas-ban legislation and promote building electrification could tee up opposition from the gas industry and real estate developers, who fought against New York City’s recent ban and have successfully led a clampdown on city-level measures across much of the country.

Some environmentalists criticized Hochul’s timetable for ending gas in new buildings, arguing it should go into effect in 2023 — the date contained in a bill from state legislators.

"It’s cool to see [Hochul] support a gas ban in new construction today, but her timeline (2027!) is way, way too slow," wrote Alex Beauchamp, Northeast region director for Food & Water Watch, in a Twitter post yesterday afternoon. Food & Water Watch was one of several green groups that pushed for the city’s ban.

One large gas-and-electric utility that opposed New York City’s earlier ban, National Grid, did not say explicitly whether it was for or against Hochul’s ban. But it hinted that, like much of the fossil fuel industry, it preferred policy that would promote hydrogen as a substitute for natural gas rather than electricity — an idea frequently pilloried as a “false solution” by state environmentalists, who point out that clean hydrogen isn’t currently produced cleanly and in large quantities in the U.S.

Consolidated Edison Inc., a combined utility with some 3.3 million electric customers and 1.1 million gas customers in New York, said it supported the governor’s proposal, however.

"The establishment of a clear-cut path toward electrification of heating for new buildings statewide is a sensible and necessary step on the path to carbon neutrality by 2050, and one we’ve already supported at the city level," wrote spokesperson Karl-Erik Stromsta in an email to E&E News.

Hochul’s blueprint, meanwhile, featured several other big-ticket clean energy plans for 2022 that won praise from many large green groups, including the Sierra Club and the New York League of Conservation Voters.

That included the $500 million for offshore wind ports, manufacturing and supply chains, while awarding new contracts for 2 gigawatts of offshore wind power. She also doubled the state’s target for energy storage development to 6 gigawatts, making it the nation’s largest target. In 2027, meanwhile, 100% of the state’s school bus purchases must be electric under Hochul’s vision, on the way to an entirely electric fleet by 2035.

One influential environmental justice coalition, NY Renews, questioned whether Hochul’s green funding plans, which include a $1 billion bond, would be sufficient. The group has called for taxes on the rich to fund the state’s transition to net-zero.

"Without billions of dollars in this year’s budget, efforts like phasing out our reliance on fossil fuels, reducing power plant emissions, commitments to electric school buses," and other climate policies "will not be realized," wrote the group, adding that the state’s climate law "cannot become an unfunded mandate."

An ‘orderly downsizing’ of fossil fuel?

Gas bans first took hold at the city level in 2019 in California, and they’ve since been counteracted by a wave of preemption laws that prevent cities from restricting fossil fuel use in buildings. Twenty states have passed those preemption laws, while no state has set targets for shifting new buildings away from oil and gas.

In New York, a task force of climate planners are already thinking far beyond new buildings, turning their sights toward a level of decarbonization that has few precedents nationally.

On Dec. 30, 2021, New York’s chief task force of climate planners, known as the Climate Action Council, released the draft of a "scoping plan" for fulfilling the state’s climate law. The plan, once finalized, would become the state’s chief guide for complying with that law.

Starting in 2024, the state should end fossil fuel use in the smallest types of new buildings, like single-family homes and low-rise apartments, according to the scoping plan’s authors. By 2027, that ban would cover all new buildings, which matches the timetable backed by Hochul yesterday.

Over time, the scoping plan would address gas boilers and appliances in existing buildings, not just new ones.

In 2024, for instance, regulators should stop letting utilities connect new customers to their gas distribution lines for free, according to the plan. In 2030, home and apartment owners should be banned from replacing their old fossil fuel equipment with anything but zero-emission versions. By 2035, the biggest types of buildings, of 50,000 square feet and up, should be forced to retire their fossil fuel equipment early.

"All the information before the Council indicates that achievement of the emission limits will entail a downsizing of the fossil gas system," wrote the Climate Action Council in the scoping plan.

Gas utilities, meanwhile, would be required to stop building distribution infrastructure and scale down sales of fossil fuels, turning toward to-be-determined sources of business, including new geothermal heat systems capable of serving entire communities. Those utilities’ workers would transition into new careers. And electric utilities, seeing new customers for their product, would foot part of the tab for any "stranded" investments in gas infrastructure.

Electricity would largely be New York’s substitute for fossil gas, under the draft plan — a recommendation that runs against the hydrogen and biomethane solutions promoted by natural gas industry.

"Under all scenarios, the vast majority of current fossil gas customers (residential, commercial, and industrial) will transition to electricity by 2050," wrote the council.

The final version of the council’s scoping plan is expected later this year, after public comment.