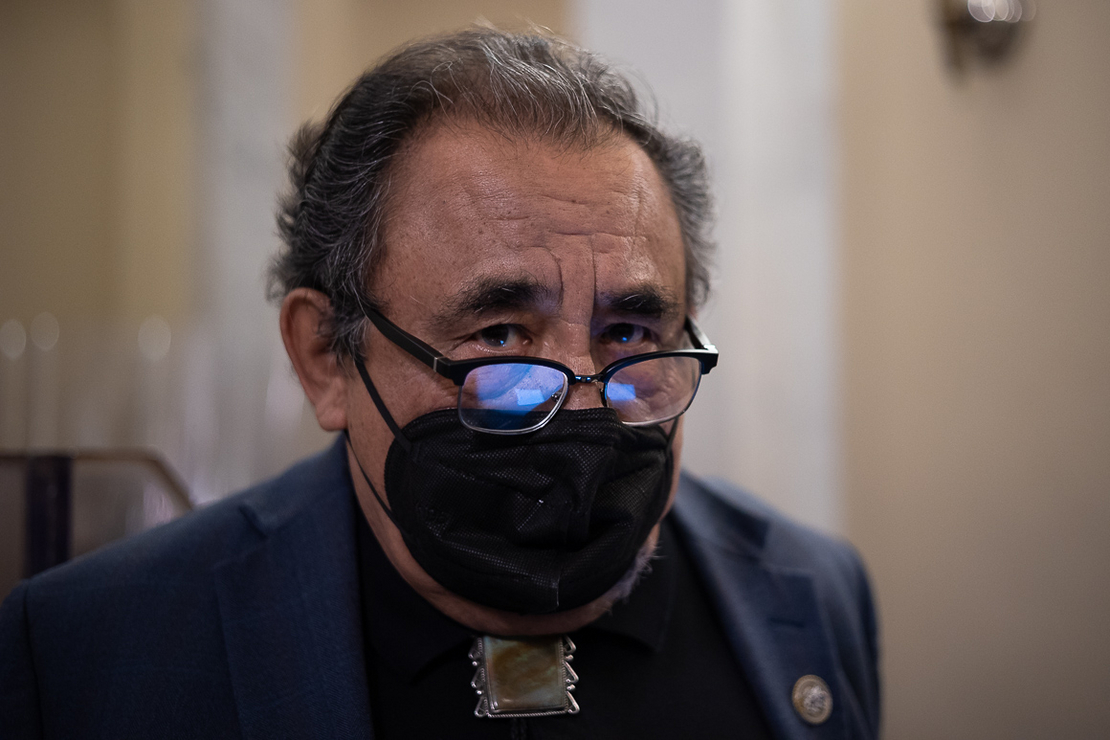 The House Natural Resources Committee approved a slate of bills this morning in a notably subdued and amicable affair.

It was a sharp departure from the usual partisan sniping that has largely defined the panel this Congress, and in light of this afternoon’s scheduled House vote to censure Rep. Paul Gosar (R-Ariz.) and strip him of his committee assignments both on Natural Resources and on Oversight and Reform (E&E Daily, Nov. 17).

In fact, the committee quietly passed legislation today as part of a package of 12 bills under a unanimous consent agreement, one that might under other circumstances have caused a political brawl: H.R. 3326 — the "Public Land Renewable Energy Development Act," or "PLREDA" — which would streamline the permitting for renewable energy projects while also creating a revenue-sharing system to allow host states to recoup money for local conservation efforts.

Gosar championed versions of this bill for the previous eight years but was kicked off as an original co-sponsor in the spring following his sympathetic comments toward participants in the violent riots at the U.S. Capitol on Jan. 6.

Republicans rushed to Gosar’s defense at the time of Democrats’ decision to sideline their colleague, but today they said nothing as “PLREDA” was reported out of the committee along with 11 other noncontroversial measures. Gosar did not participate in the day’s proceedings.

The most contentious the markup got today was over H.R. 2026, from Rep. Hakeem Jeffries (D-N.Y.), which would launch a competitive grant program housed within the Interior Department to help conserve endangered amphibians around the world.

Committee ranking member Bruce Westerman (R-Ark.) took issue with the fact that the bill would send taxpayer dollars abroad when the United States is struggling to protect endangered species at home.

Rep. Matt Rosendale (R-Mont.) challenged Democrats to support three separate amendments that would each prevent the bill from going into effect unless three currently listed endangered species were delisted: the greater sage grouse, the grizzly bear and the gray wolf. Each amendment was defeated with party-line roll call votes.

Republicans also forced roll call votes on an amendment from Westerman — which failed — and a substitute amendment from committee Chair Raúl Grijalva (D-Ariz.), which was adopted.

The legislation was ultimately reported favorably out of the committee, again along party lines, 25-17.

One measure, H.R. 404, from Rep. Ted Lieu (D-Calif.), would amend the 1976 Magnuson-Stevens Fishery Conservation and Management Act to phase out unsustainable commercial fishing gear in federal waters within five years, for the purpose of protecting marine life. It was approved in a voice vote in the House Natural Resources Committee following recent Senate passage.

A second, S. 2923, from Rep. Sylvia Garcia (D-Texas), would streamline the federal response to fishery disasters, as well as the process by which the secretary of Commerce must determine the scale and scope of such disasters. It was also passed by the committee with a voice vote in the wake of support from the Senate.

While there were some cross-the-aisle disagreements on specific provisions of the legislation, lawmakers ultimately engaged in a productive discussion and made a series of commitments to keep negotiating and compromising ahead of the measure’s consideration on the House floor.

Democrats agreed to accept an amendment from Rep. Garret Graves (R-La.) to make some technical changes to the bill that would make it easier for more fisheries to qualify for disaster assistance.

Graves later was obliged to withdraw his request for a vote on a separate amendment seeking to allow crawfish fisheries to qualify for relief under the bill, with Grijalva offering to continue to find common ground on the matter.

The remaining 11 bills advanced under the unanimous consent agreement are: