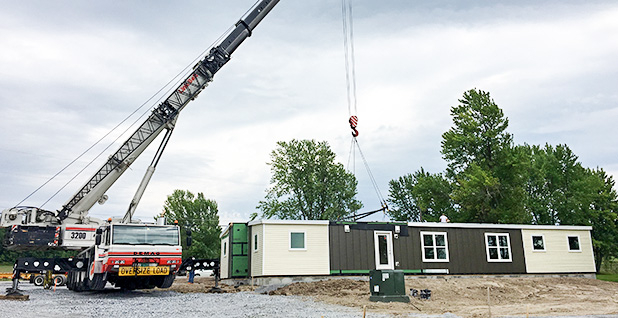 Crews install a unit at the McKnight Lane affordable housing development. The Waltham, Vt., development is one of the nation's first low-income communities powered entirely by clean energy. Photo courtesy of the Addison County Community Trust.

Alexis LaBerge, a 27-year-old single mom with a 4-year-old daughter, used to pay $1,000 per month to live in a drafty old house in Vergennes, Vt., where the only thing standing between winter’s wrath and indoor comfort was a budget-busting propane bill.

"It’s the polar opposite of what I used to live in," LaBerge said in a telephone interview. "I can be in my bedroom at one end of the house and not worry whether my daughter is warm enough in her room at the other end."

LaBerge is among a half-dozen Vermont families feeling thankful to live in one of the nation’s newest and greenest residential communities — a place where renewable energy, clean technology and efficiency-focused design are redefining what it means to occupy affordable housing.

The McKnight Lane development, comprising 14 net-zero energy modular homes, is like no other housing project in New England, according to officials who helped design and build the subdivision in Waltham, just outside Vergennes about an hour south of Burlington.

"It’s not necessarily a tourist destination, but it is a very nice community in a quaint New England setting, and people have been very interested in it," said Elise Shanbacker, executive director of the Addison County Community Trust, the owner and co-developer of McKnight Lane.

But that wasn’t always the case.

As recently as last spring, McKnight Lane was known as Gevry Mobile Home Park, a ramshackle collection of 13 abandoned house trailers that had stood idle since 2009. The site, just a mile from downtown Vergennes, long had redevelopment potential. But it was mostly an eyesore, with the old trailers falling into disrepair while weeds and scrub overtook the scruffy lots. More importantly, some of the trailer sites had been rendered toxic by spilled fuel oil.

Many viewed the trailer park as a prime example of "rural blight," a phenomenon seen across New England as jobs and services migrate from village to city, leaving behind pockets of old charm, such as downtown Vergennes, but also significant numbers of underemployed and financially vulnerable citizens.

It was just that demographic that the Addison County Community Trust and its partner organization, Cathedral Square Corp. of South Burlington, were set up to serve. The two groups set out to form a coalition capable of reinventing the defunct trailer park into a model of low-income, energy-efficient housing.

They quickly won the support of the Montpelier-based Clean Energy Group, which advocates for renewables and clean tech solutions regionally and nationally, and Efficiency Vermont, a Burlington-based agency that helps homes and businesses reduce energy costs through efficiency services, best practices and incentive programs.

Organizers also secured a contract with VERMOD, a local builder of high-efficiency modular homes, which agreed to build the McKnight Lane homes at its factory in Wilder, about 75 miles away. Other partners included sonnen Inc., a German developer of intelligent battery storage systems, and Green Mountain Power, Vermont’s largest electric utility.

Bolstered by $3.6 million in grants from Vermont agencies, organizations and banks, ACCT and Cathedral broke ground on McKnight Lane in May, using backhoes and bulldozers to raze the old trailers and prepare the site for the construction of the seven two-unit buildings that now occupy the site.

Renters began moving into the homes in October. Full occupancy is expected by the end of the year, with rents topping out at $850. As with LaBerge’s home, all utility costs are absorbed by the owner, which amounts to almost nothing since the rooftop solar systems supply more than enough power to energize the homes for most of the year.

"Not only is McKnight Lane affordable to low-income Vermonters, the resilient energy storage systems ensure residents won’t have to choose between purchasing groceries or paying their fuel bill to stay warm this winter," Shanbacker said.

Excess power from the solar panels will be stored in the homes’ batteries. And once charged, the batteries will send any excess energy to Green Mountain Power under a net-metering agreement with ACCT. Green Mountain, which paid for the battery systems, will also be able to draw electricity off the batteries to help manage peak power demand and lower costs for all of the utility’s customers.

Craig Ferreira, an innovation development manager with Green Mountain who helped oversee the installation of the home battery systems, said the McKnight Lane project is providing the utility with a rare opportunity to expand its distributed energy capacity, while also giving McKnight Lane residents a ready supply of backup power during emergencies or periods when solar generation is not available.

"The homeowner doesn’t have to do anything," Ferreira said. Theoretically, each home should produce sufficient solar power to meet the demand of daily heating and cooling and appliances. Any excess solar generation is stored in the battery, where it will be managed by Green Mountain. "They probably won’t even know when we’re dispatching [power] from the battery," Ferreira said. "The system pretty much runs itself."

While Vermonters take considerable local pride in their groundbreaking housing for low-income residents, advocates like the Clean Energy Group say there is nothing about McKnight Lane that can’t be replicated in other places, and they hope to convert the project’s success into a broader movement.

"The ultimate goal is to create a template for the next project," said Todd Olinsky-Paul, project director for the Clean Energy Group. "How do you replicate this? What are the lessons learned?"

To answer some of those questions, CEG will collect data on how the McKnight Lane homes perform under real-world conditions, and experts from Sandia National Laboratories will help analyze that data.

Eventually, proponents say, they hope to see the intersection of clean technology and affordable housing become a federal priority, with billions of dollars in potential cost savings at stake for government agencies, public housing authorizes and residents of affordable housing.

Private-sector firms like battery maker sonnen also see an opportunity to expand their markets by developing products that can be deployed at the scale of homes and apartment buildings.

In a statement, sonnen CEO Christoph Ostermann said technologies like the solar and storage systems deployed at McKnight Lane are "providing cost savings and peace of mind for these homeowners," while also extending the benefits of clean energy technology across a broader segment of society.

"That’s the key to our work," said Lewis Milford, president and CEO of CEG. "You have to bend the arc of this technology to benefit low-income communities now, not 10 years from now when it trickles down from the wealthy early adopters."