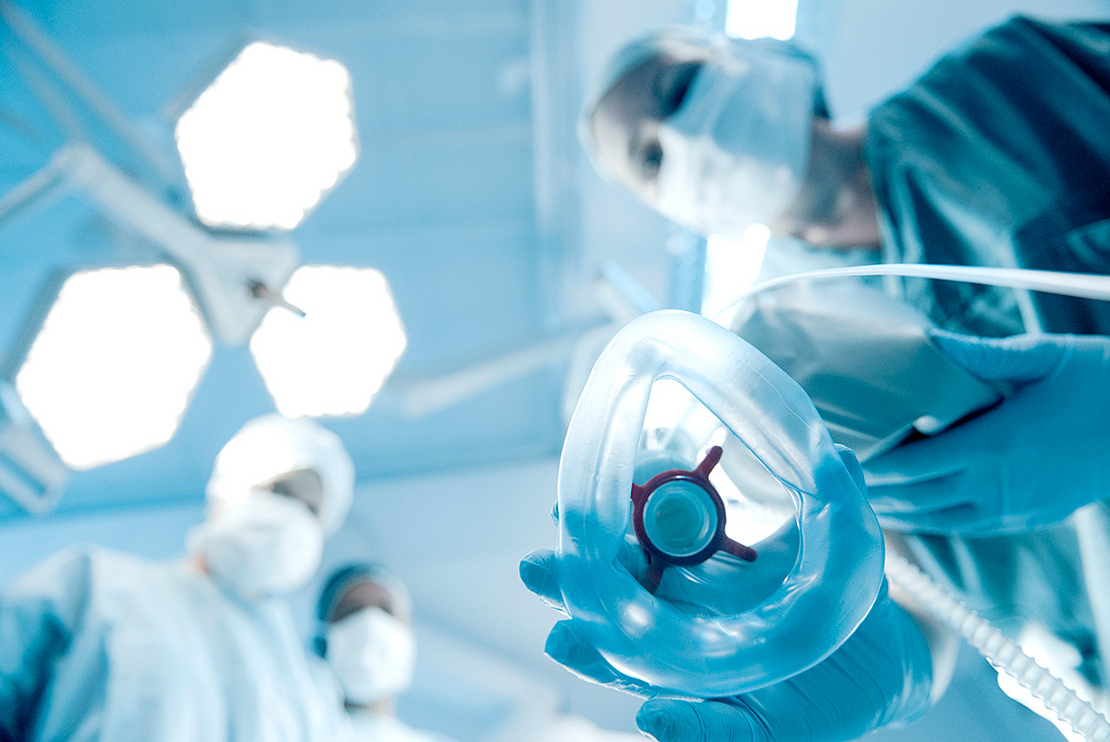 An anesthesiologist places a mask on patient, with surgeons in the background. SCIENCE PHOTO LIBRARY via AP Images

Depressed in 2016 over the presidential election and what it might mean for the planet, Dr. Brian Chesebro decided that the best way to “snap out” of his climate anxiety was to assess his personal emissions.

What he found was surprising.

His biggest contribution to greenhouse gas emissions wasn’t his car or even his home utility bill — it was his job as an anesthesiologist, putting patients to sleep before surgery.

The major gases used to put patients under are all greenhouse gases more potent than carbon dioxide. Unregulated, they are all emitted shortly after use without any filtration or treatment.

“I was like, holy crap, this is a big opportunity,” he said.

The realization inspired Chesebro to convince his colleagues to change which anesthetic gases they use and favor those with less warming potential.

He’s not alone. Nationally, the health care system accounts for nearly 10 percent of domestic greenhouse gas emissions, according to a 2016 study published in PLOS One. So for the many hospitals now looking to rein in their own contributions, reexamining anesthetic gases has proven a crucial step.

“As clinicians, we have the responsibility to do no harm, and that includes not just our patients, but public health and planetary health, too,” said Jodi Sherman, an associate professor of anesthesiology at Yale School of Medicine, which in 2013 became the first hospital to completely stop using the anesthetic gas desflurane, based on environmental concerns.

When patients inhale the gases and drift off to sleep, their bodies only metabolize roughly 5 percent of the gas. The rest is exhaled, sucked out of the operating room, through a hospital’s roof and into the atmosphere.

There, the gases significantly contribute to climate change, though exactly how much varies. Sevoflurane has nearly 350 times more global warming potential than CO2. Desflurane, another popular gas, has more than 3,714 times the global warming potential of CO2. Not only is desflurane the more potent greenhouse gas, but it also lasts in the atmosphere for 14 years. Sevoflurane only lasts for one year.

The two gases are clinically similar, meaning there are few instances when using one over the other would be medically preferential. Anesthesiologists usually just pick the gas they are most used to before surgery.

In the past five years, Chesebro has given countless presentations in staff meetings, telling his colleagues about how their seemingly innocuous decisions actually have huge impacts.

In 2016 alone, he calculated, the eight hospitals of Providence Health & Services-Oregon emitted in anesthesia the greenhouse gas equivalent of driving 5.6 million miles in a Hummer H2. On an individual scale, emissions from anesthesiologists choosing to use desflurane were equivalent to driving a fleet of 12 Hummers throughout the duration of a surgery, as opposed to only half a Hummer for colleagues using sevoflurane.

Simply sharing that statistic has led to big changes at the hospital system’s anesthesia practices.

“Nobody goes to work thinking, ‘Hey, I’m going to contribute as much carbon to the atmosphere as possible today.’ Nobody wants to do that,” he said. “If you show them how to do better, they will do better.”

Chesebro has been rewarded for his efforts. He was promoted to be Oregon regional medical director of environmental stewardship for the Providence health system and is now working to reduce all sources of emissions across the system.

“None of us realized what we were doing until Dr. Chesebro brought it forward,” said Providence Health & Services-Oregon Chief Operating Officer William Olson.

‘You should also be considering environmental health’

Even Baxter International Inc., the pharmaceutical market leader that manufactures both desflurane and sevoflurane, is reexamining the warming impact of its products.

Though it says desflurane is still an important tool for anesthesiologists treating elderly or obese patients who may need a larger dose of anesthetic to remain asleep during complicated surgeries, the company has started a pilot project exploring how to capture and recycle anesthetic gases, “thereby reducing the release of these anesthetics into the atmosphere.”

“Baxter is committed to reducing our environmental impact and offer Sustainable Anesthesia which aligns with Baxter’s mission to Save and Sustain Lives,” the company said, noting that anesthetic gases’ “carbon footprint is low relative to other societal contributors” like burning fossil fuels.

Medical Director for Environmental Sustainability Jonathan Slutzman says the hospital is now thinking through various ways to cut those emissions while still caring for patients.

“We are still going to keep doing surgeries, but there are a few ways to reduce our anesthetic footprint,” he said.

The hospital already doesn’t use much desflurane but relies heavily on another anesthetic and greenhouse gas, nitrous oxide.

One option on the table is introducing gas capture or recycling technologies into the operating rooms. Another is ensuring that only patients who truly need anesthetic gases — as opposed to being put to sleep with intravenous fluids — get them.

“You can have a huge difference just by using an IV,” Slutzman said, noting that in the emergency room where he works, anesthesia is only administered intravenously and never with a gas.

Having eliminated desflurane’s use at her hospital nearly a decade ago, she’s now focusing on reducing the use of nitrous oxide — an anesthetic gas with a warming potential nearly 300 times that of CO2.

“Obviously, a patient’s safety comes first, but if you have many different ways to keep a patient safe, then you should also be considering environmental health,” she said.