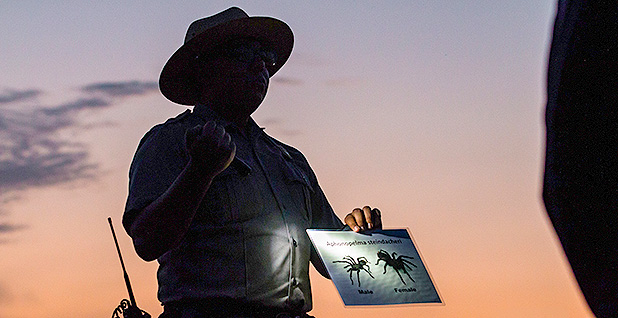 Seeking to cut its workforce in the new year, the National Park Service is offering its employees voluntary buyout packages as an incentive to get some of them to retire early.

Details of the plan are sketchy.

A memo sent to all employees by acting NPS Director Michael Reynolds said the separation payments would affect "a number of employees," but the Park Service would not say how many of its more than 20,000 jobs might be eliminated.

Jeremy Barnum, acting chief of public affairs for the Park Service, said today that the primary purpose of the buyouts is not to reduce expenses.

"The general intention is to provide parks and programs with a faster way to restructure their workforce to make room in budgets for potentially higher priority positions," Barnum said.

In the Dec. 20 memo, Reynolds told employees that budget cuts in recent years had "constrained the ability of NPS units" to recruit and fill positions through attrition, leaving both permanent and critical seasonal positions open. Park units had also been given new responsibilities as their workloads changed and modernized, he wrote.

Reynolds said the buyouts would give park managers "a powerful tool to achieve workforce planning goals more quickly than attrition or other existing authorities."

Emily Douce, budget and appropriations director for the National Parks Conservation Association, called the memo "disheartening" and said buyouts would "only add to the NPS’s struggle to safeguard our national treasures."

"Budget cuts and insufficient funds from Congress in recent years have led to crumbling facilities and too few staff to serve visitors and protect and enhance cultural and natural resources," she said. "Over the last five years, the park system has lost 11 percent of its staff while at the same time struggling to accommodate a 19 percent increase in visitation on average across the system."

Workers have long expected cuts, with Interior Secretary Ryan Zinke making it clear last year that he wanted to reduce the size of his overall department’s workforce.

Zinke, who oversees the national parks, told a Senate subcommittee in June that he would pursue reducing the Interior Department workforce by 4,000 full-time jobs through a mix of attrition, separation incentives and reassignments, to meet his 2018 budget goals (Greenwire, June 21).

But in his memo, Reynolds said the buyouts are part of a process that began in 2014 and not part of a broader reorganization.

"The DOI Reform Plan has not been finalized, as it is still under planning and review by the Department, the Office of Management and Budget, and Congress," Reynolds said.

During a previous round of voluntary buyouts that ran from September 2014 through March 2016, the Park Service gave separation payments to 289 employees, Barnum said.

Reynolds emphasized that the buyouts are voluntary.

"I recognize the work you do every day is not only valuable but has been essential in developing the remarkable organization we have all helped to build," he wrote. "I want each and every employee to know, whether you are offered a [buyout] or not, and whether you choose to accept or not, that the work you do is no less important to those you serve."