‘No one is exempt from the aftermath’ 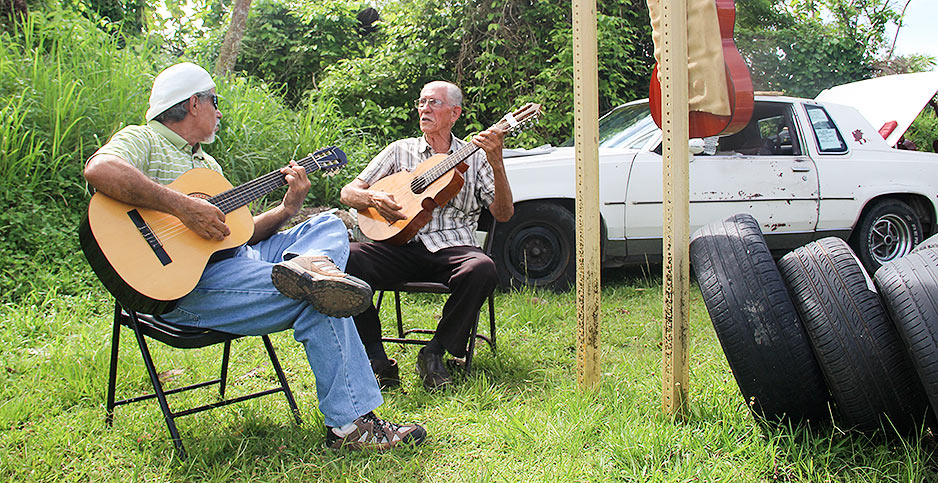 Angel Flores, 66, and Juan Correa, 81, pass the time exchanging jokes and playing traditional Puerto Rican music on the side of a highway near the west coast of Puerto Rico. Arianna Skibell/E&E News

First of a series. Click here for the second part.

Almost three months since the Category 5 monster’s rampage, government trucks are still hauling away storm debris as cars inch timidly through intersections without working traffic lights. The hurricane left Puerto Rico’s 3.4 million residents without power, and parts of the island remain in the dark.

Alex Acevedo is a worker at a mini-mart and gasoline station in the west coast beach town of Rincón. He said getting to and from work continues to be a challenge. "How do I get to my house? How do I get to other places? You can see: the poles down, cables on the street."

Thousands of people have left for the mainland, hundreds of businesses have closed their doors, the island could be on the brink of a housing meltdown and Gov. Ricardo Rosselló today ordered a review of the total death count after outside analyses found the number closer to 1,000 — higher than the official count of 64.

As the adrenaline of survival is waning — and quotidian routine returns — a pervasive desperation around the island persists.

Rincón, known for its surfing, scuba diving and iconic Punta Higuero Lighthouse, is usually bustling with tourists. Now the main drag is populated by mix of federal government workers and locals. The sky is a bright blue, reflected in the still waters where the Caribbean Sea meets the Atlantic Ocean.

In between a deserted Tiki bar and closed tourist information storefront, an "open" sign hangs on the door of a gift shop. Inside, shot glasses, hats, T-shirts and other knickknacks sit untouched.

"We depend maybe 95 percent on tourism," said Kristy Moreno, 21, who tends the cash register at the empty store. "I don’t think tourists are going to come here for a while."

Wearing a bright floral top and jeans, her long, curly hair held by a headband, Moreno said she’s been suffering anxiety attacks since the hurricane.

Moreno’s family has been under financial stress since her work hours were cut and her husband lost his job at a gasoline station in Maria’s wake. The couple has moved in with his grandparents, she said.

"Then they told me they were going to cut [my hours] down a little bit more, so I got frustrated," she said. "I remember the day they told me, I couldn’t sleep. I was crying, like I was having an attack. I remember my husband told me, ‘Don’t panic. Stay calm.’ And I’m like, ‘I can’t.’"

Moreno left for a time to visit her uncle and other relatives in Orlando, Fla. She found a job, but after a month started feeling depressed. She returned to Rincón.

"I’ve seen that even though there’s no electricity, the gas line has gone down, the supermarkets are OK and everything," she said. "We’re kind of getting used to the situation."

When Maria hit, Moreno was taking care of her grandparents. In preparation, she locked the windows and pushed a couch against the front door since "they were recommending that on the news." But as wind and rain intensified, water poured in through closed windows and doors.

"It was horrible," she said. "We had 2 inches of water in the house. I [could] see the cars getting hit. My grandpa’s car window broke."

When the storm finally passed, Moreno saw the roof of her cousin’s house in the street.

"I started running," she said. "It was a bunch of trees in the middle to get to her house, and I was jumping all over them and yelling her name, and she didn’t answer."

Her cousin was unharmed, and the rest of her family likewise escaped without serious injuries. But a week after Maria, her grandmother, who had terminal cancer, took a turn for the worse.

"She had run out of oxygen," Moreno said. Hospice workers who oversaw her grandmother’s care hadn’t returned to work since the hurricane.

"I remember I went to her, she was in bed. She looked different," Moreno said. "But I talked to her. I always talk to her. I went and I bought some milk for her. And then when I was leaving — she always used to bless me in a special way — and I remember she didn’t."

While Moreno and her family had been expecting her grandmother’s death, having it accelerated by the hurricane made it even more difficult.

"They already told us it could happen any time," Moreno said. "But not in this situation. We didn’t want it that way."

‘We cannot lay down’

Half a mile down the road, the slogan seems to be helping buoy Acevedo, the service station worker.

"Our spirit has to be to keep on working. We cannot lay down, because if you lay down — if we lay down — our kids are going to see that we’re laying down," the father of three said. "They are the ones that are going to suffer."

Acevedo, 42, wears a red polo shirt. His tightly cropped hair mirrors his close shave. Behind him are shelves stocked with booze and cigarettes.

A tall man in a Hawaiian shirt and straw fedora walks into the gas station to pay for the canister of fuel he filled at the pump. Immediately after the hurricane, gasoline was scarce, Acevedo said. But because of the mini-mart, business has been somewhat steady.

Maria flooded Acevedo’s house, he said. While his windows were secured, water poured in through the power outlets. And now rains swamp his house.

"It’s still flooding. There was mold, and there’s still mold you can see on the tiles," he said. "My house is white, and now it’s being brown and black."

Though Acevedo doesn’t have electricity, he bought a generator before the storm, which has allowed his family to cook and charge their phones.

"The generator is a part of our family now," he said.

The blackout in Puerto Rico is the longest power outage in recent U.S. history. And while many have criticized the federal government’s inability to aid Puerto Rico more quickly, Acevedo sees his territory’s connection to the United States as a plus.

Fifteen miles south of Rincón, in Mayagüez, Kimary Carrero and Gabriel Vera return from dinner at Applebee’s to spend the night in their home for the first time since the hurricane.

The couple has been living with Carrero’s parents, but they were finally able to install their own generator.

"You couldn’t find a generator anywhere," said Carrero, 33, a singer and the owner of a custom trophy business. "My mom went to Home Depot, and she was begging the guy to let her know when they were coming, and he was like, ‘No, I can’t tell you.’"

Carrero’s mother persisted, she said, leaving the man her phone number. He called and told her to arrive at 4 a.m. on the day of the generator shipment. Even then, she had a three-hour wait.

"After Hurricane Maria, everywhere you go there’s lines — for the bank, for gas, for everything. It took her three hours, and that was nothing," she said. "Before, it was 14 hours waiting for gas. It was a whole day to just get money out from the ATM. So three hours is nothing, really."

It took two more weeks before the couple could get the materials needed to install the generator. "Everything is out of stock, and everything is taking very long to get here," Carrero said.

Carrero walks to the basement to fiddle with the circuit breaker, while Vera, her 29-year-old husband, starts up the long-awaited generator. The loud, familiar whirring begins. And after a few unsuccessful iterations and combinations, Carrero flicks the right switch and the lights turn on.


E&E News reporter Arianna Skibell interviewed musicians Angel Flores and Juan Correa on the side of a highway near the west coast of Puerto Rico about their life after Hurricane Maria.
Read a transcript.

Editing and production by Arianna Skibell.

Upstairs, Carrero and Vera sit on a white leather sofa in their now-illuminated living room. The two dogs roll around on a shaggy carpet, intermittently barking until pet.

After the hurricane, Carrero was forced to close one of her two businesses and cut operation hours of the other. People aren’t interested in customized trophies and plaques these days, she noted.

"Right now, people are focusing on surviving and getting their basic needs," she said. "It’s moving, but not as it used to, so we have to make cutbacks."

The night of the hurricane, Carrero and Vera huddled in bed with their two dogs, waiting for the storm to end. "I felt like in the scene of ‘Titanic’ where they’re drowning and they’re in bed waiting for the world to end," Carrero said.

In the morning, water cascaded from windows like waterfalls. And for the next 14 hours, the family formed a bucket brigade.

"We had time to have breakfast, and then it was till like 11 at night, getting water out of the house," she said. "I couldn’t go to sleep because my arms hurt so much."

One of the dogs begins to whine, so Vera moves from the couch to the floor, taking the pup in his arms to kiss and hug it until it calms down.

"No one is exempt from the aftermath," Carrero said. "Everyone is trying to pretend that they’re OK because you always know there’s someone else that’s worse than you."

Vera looks up from the dog. "You don’t know what’s going to happen every morning," he said. "It’s tough."

On the southern route from Mayagüez to San Juan, the dense urban area opens to sprawling green fields. Near the southern town of Salinas, a giant wind farm stands completely still, defying the breeze.

Farther north, the blacktop turns to cobblestone in the historic neighborhood of Old San Juan.

Inside an empty restaurant sits Deborah Olivares. The middle-aged British transplant has been unemployed since the hurricane hit. Her graying hair is tied tightly back. She looks tired.

She pulls antibiotics from her purse to help her battle intestinal problems that began when she drank untreated water.

"I drank the water out of desperation, and it was stupid because I was violently sick," she said.

Her rashes, severe diarrhea and vomiting aside, Olivares said the worst part of Maria is the mass exodus it spurred. More than 100,000 people have left Puerto Rico since the storm.

"I have 30 friends who have just left the island," she said. "We didn’t have that luxury. Or even if I did, I wouldn’t have left anyway. I love it here."