No time to waste for Trump admin’s assault on WOTUS 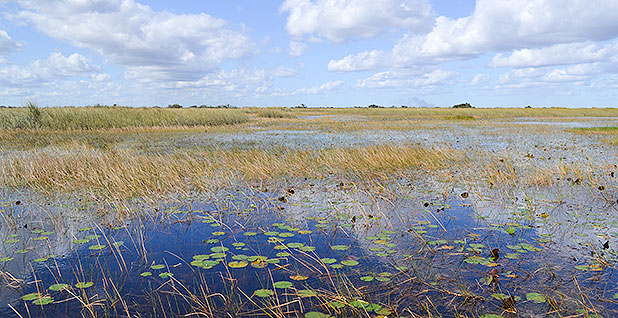 The Trump administration must sprint if it wants to repeal and replace the Clean Water Act rule that determines which wetlands and streams get automatic federal protection.

EPA said this week that it intends to do two rulemakings to repeal and replace the rule, which is also known as the Waters of the U.S. (WOTUS) rule. The regulation has drawn fierce fire from farmers, developers and the oil and gas industry, which say it’s regulatory overreach.

The agency has one eye on the high court, which is expected to decide on WOTUS jurisdiction by the end of this year.

If the justices decide the litigation belongs in district court, it could endanger a nationwide stay issued by the 6th U.S. Circuit Court of Appeals that barred WOTUS from taking effect.

"If the court says the 6th Circuit doesn’t have jurisdiction, the stay is dissolved," said Pat Parenteau, a professor at Vermont Law School. "They already tried to stop the court from taking the case, and that didn’t work, so this is the next best way around that question."

But replacing WOTUS won’t be done quickly or easily given likely legal challenges to a revamped regulation and a long history of battling over Clean Water Act protections for isolated wetlands and waterways (Greenwire, Feb. 10).

So the Trump administration likely felt it had to proceed with a repeal to ensure it could get that done before the Supreme Court rules, said Larry Liebesman, a senior adviser with Dawson & Associates, a Washington lobby shop and consulting firm that specializes in water resources.

"I think they probably looked at the practical realities of doing it one at a time and realized that this was the easier path, given the Supreme Court decision, rather than trying to do it all in one fell swoop," he said.

"I think this strategy probably makes sense in the sense that they want the old rule gone and they admit that a replacement will take time," he said. "There is a certain logic to doing it in two stages."

Adler noted that the Trump administration has said it will write a new regulation that relies on an opinion written by the late Supreme Court Justice Antonin Scalia in the famously messy 2006 Rapanos v. United States, a 4-1-4 split decision.

Scalia, who died last year, had argued that the Clean Water Act applied only to relatively permanent bodies of water or wetlands connected to "navigable waters" by a surface flow at least part of the year. Chief Justice John Roberts and Justices Clarence Thomas and Samuel Alito joined him.

But Justice Anthony Kennedy issued a concurring opinion stating that waters must have a "significant nexus" to navigable rivers and seas, including through biological or chemical connections. Until now, EPA has followed Kennedy’s "significant nexus" test in regulating clean water.

Both the George W. Bush and Obama administrations relied on Kennedy’s test.

"The more aggressive the administration wants to be, the more care and attention will be required," Adler said. "Writing a regulation that is more in line with Scalia’s plurality opinion can be done lawfully, but it would take care to do it right. It’s not something you can do on the fly."

Reed Hopper, an attorney at the conservative Pacific Legal Foundation, said WOTUS challengers could convince a district court to issue a nationwide stay, but the matter would be easier if the administration can repeal the regulation before the Supreme Court rules.

"They are going to withdraw the rule sometime, so they might as well do it now," he said. "It can take a while to do a replacement, there is no question about it, and you have a litigation that is still pending, so why not get rid of it now and start from a clean slate?"

Still, while conducting separate rulemakings to repeal and replace the regulation might be easier for the Trump administration than trying to do both at once, it’s far from a sure path.

Splitting the rulemakings gives environmentalists two opportunities to challenge the administration and start another round of litigation.

"Even the rescission is going to be challenged, and certainly the replacement will be," Parenteau said.

Liebesman agreed: "This strategy will run into legal roadblocks, there is no way around that."

But the PLF’s Hopper said the administration has little choice but to take that route.

"It is probably the most economical and efficient approach, even though we are confident that the courts would ultimately overturn the regulation," he said.

Liberal-leaning legal experts say a strategy of splitting up WOTUS repeal and replacement into separate procedures could mean a replacement is never written. They say that would bring Clean Water Act jurisdiction back to guidance from the George W. Bush administration, which would likely be less restrictive than the Trump administration would prefer.

Jon Devine, a senior attorney for the Natural Resources Defense Council, said he believes the Trump administration is "desperately afraid" that any attempt to write a more conservative regulation will flop.

"They’re scared that their preferred plan of changing the legal test to radically roll back what the law protects will fail, so they don’t want to tie their repeal of the Clean Water Rule to that anchor," he said.

He said while the courts might not appreciate the Trump administration repealing the regulation without even setting a timeline for replacing it, "that risk may be less than the risk of coming up with a Scalia-based test."