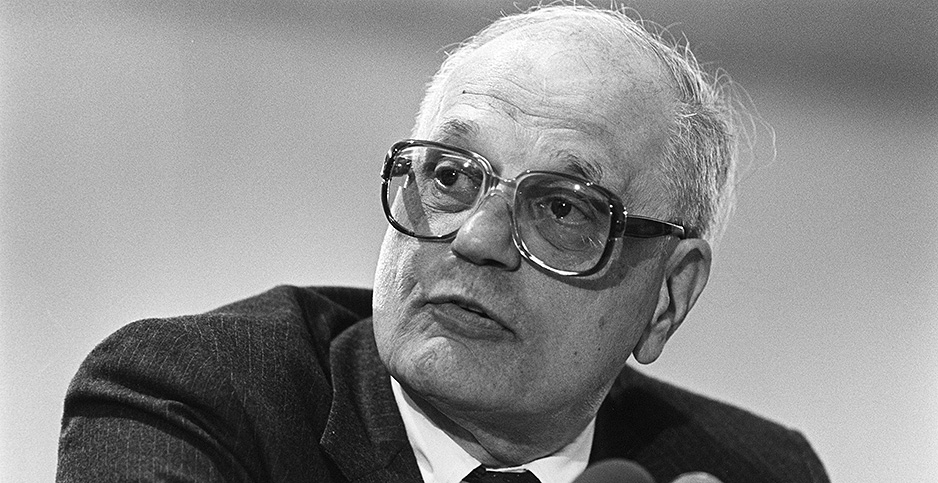 Dingell, who retired from Congress in 2014 after serving 59 years in the House, died yesterday from complications related to prostate cancer. He was 92 (E&E Daily, Feb. 8).

In remarks on the House floor, Speaker Nancy Pelosi (D-Calif.) recalled Dingell’s "towering legacy" as the longest-serving member of Congress. She ordered flags at the Capitol to be flown at half-staff today.

"Last night, our nation lost a beloved pillar of this Congress and one of the greatest legislators in American history. Every chapter of Chairman John Dingell’s life was lived in service to our country," Pelosi said, recalling Dingell’s service as a House page and in the Army during World War II and his special-election victory in 1955 to replace his father.

House Minority Leader Kevin McCarthy (R-Calif.) focused on Dingell’s long tenure at the House Energy and Commerce Committee, where the Michigan Democrat was a force for nearly three decades.

"He had great passions: passions for his constituents, passion for his committee, Energy and Commerce," McCarthy said. "He loved this committee so much, he thought there needed no other committee in this House."

McCarthy paused for laughter and applause in the chamber before continuing: "It wasn’t until his retirement that we got jurisdiction back in other places."

When asked about the jurisdiction of his beloved panel — where he served as chairman from 1981 to 1995, then ranking member until 2007, and chairman again until 2008 — Dingell himself would simply gesture at a large photo of the Earth taken from space, according to an oft-repeated anecdote.

That wasn’t entirely an exaggeration.

"There are few major legislative triumphs since 1955 that John didn’t have a key hand in passing," former President Bill Clinton and former Secretary of State Hillary Clinton said in a joint statement, pointing to Dingell’s role in the creation of Medicare and the Affordable Care Act, as well as civil rights legislation.

Dingell was a "tireless champion of civil rights who would often cite his vote for the Civil Rights Act of 1964 as the proudest and most important of his career."

"He was a legislative titan," said Frank Maisano, a senior principal at the firm Bracewell LLP who once served on Capitol Hill as an aide to Michigan GOP lawmakers.

He pointed to Dingell’s work to secure the Clean Air Act Amendments of 1990, balancing the desires of the auto industry based in the Michigan lawmaker’s home state with environmental demands from Californians. The legislation would ultimately pass with a vote of 401-21.

Maisano said of Dingell, "He was one of the people who could hammer out those things and see things in a way that we just don’t see them anymore in politics."

He added, "We need people like John Dingell in Congress today to meet challenges like climate change. We just don’t have that type of titan that can bridge that gap."

‘A witness to history’

Rep. Dan Kildee (D-Mich.), who overlapped a single term with Dingell, said he — like many new members — sought Dingell out when he came to Capitol Hill.

"He gave me the same advice he gave a lot of people, but it sticks with me. He said, ‘People make mistakes around here. They make mistakes because they think they are important people. You have an important job; that does not make you an important person. Don’t forget that,’" said Kildee.

Kildee noted Dingell was especially close to Majority Leader Steny Hoyer (D-Md.), who flew out to Michigan to visit him over the past week.

"This guy was not just a witness to history; he was part of it," Kildee said, recalling his work on the Civil Rights Act.

Rep. Don Young (R-Alaska), the current dean of the House, called Dingell a good friend with whom he hunted and fished.

"He was the most powerful chairman I ever dealt with. Any bill or legislation, he’d figure out a way to get jurisdiction over it, and a lot of people resented that," said Young, who said he found Dingell’s "strong personality" to be a strength.

Young recalled finding common ground with him on hunting, fishing and wildlife refuge conservation matters. "We always talked about things. We might not agree; if we had a difference, it was settled frankly in the back room. We don’t do that anymore," he said.

Rep. Greg Walden (R-Ore.), a former E&C chairman, said Dingell was an "absolute legend" who was at his best when leading oversight hearings and having dozens of staffers working on investigations.

Walden said committee lawmakers have long tried to emulate his rapid-fire, yes-and-no questioning of witnesses to avoid evasive answers. "But nobody could do it like John Dingell could," he said.

Walden also praised his civility and courteousness but said he could be a fierce debater in committee.

"You always knew he was about to take you apart when he’d say, ‘Now, my dear friend, and I do mean he’s my dear friend,’ and you would get eviscerated," Walden said, laughing.

Among other features of the landmark Clean Act Amendments of 1990, the updated legislation dramatically bolstered EPA’s efforts to reduce hazardous air pollutants and created an emissions trading program to address acid rain.

"It was a remarkable process, and he was the primary architect," said Chuck Knauss, the Energy and Commerce Committee’s Republican counsel at the time, adding that it showed Dingell "at his very best."

Now a partner at the firm Hunton Andrews Kurth LLP, Knauss worked extensively with Dingell during that time. While others, such as Rep. Edward Madigan (R-Ill.), also played an important role in the law’s enactment, Knauss said this morning, "I think there’s little doubt that this would not have happened but for Chairman Dingell."

Madigan praised Dingell in a 1983 interview with The Washington Post, calling his colleague both "an arbitrary and capricious son of a bitch and … a great parliamentarian."

Madigan said, "Dingell is formidable not because he has more friends than anyone else, nor because he is more skilled — there are others as skilled as he. His strength comes because he takes the skill he has and combines it with good staff work, a thorough knowledge of the issues and a bulldog determination not to let go. He is the most tenacious member of Congress."

Dingell also made use of his leadership at Energy and Commerce to be a well-placed and effective defender of automotive interests known for fighting tighter vehicle fuel efficiency standards — a stance that earned him the nickname "Tailpipe Johnny."

According to contemporaneous news accounts, environmentalists also slammed Dingell’s defense of the automotive and steel industries. Activists appeared at one hearing in the early 1980s wearing "Dirty Dingell" T-shirts.

Rep. Fred Upton (R-Mich.), who long served with Dingell on Energy and Commerce and once chaired the panel, said Dingell’s most lasting legacy is his bipartisan dealmaking, and his compassion for members on both sides of the aisle.

"I knew him as a staffer, obviously as a colleague, as the chairman, he was my chairman," Upton said. "But to the very end, he was more concerned about us than him."

Upton also recalled the chairman’s legendary oversight prowess. The Michigan lawmaker was known for his investigative powers, like the inquiry into EPA under President Reagan that would lead to the conviction and imprisonment of Rita Lavelle, who oversaw the Superfund program.

"You never wanted to be there raising your right hand on the wrong side of the law," Upton told reporters this morning. "A big pot of coffee, by design, was on that table because he wasn’t going to let you leave early."

‘Feathers on a fish’

Dingell didn’t only clash with Republicans and administrations during his tenure. One of his most famous feuds was with Pelosi, who incensed the chairman by forming the Select Committee on Energy Independence and Global Warming when Democrats took over the House in 2007.

Dingell felt Pelosi had rolled him and famously said the select committee was "as useful as feathers on a fish."

When the select committee was looking for places to hold meetings, one former aide told E&E News the staff knew Dingell’s Energy and Commerce hearing room was off-limits (Climatewire, Nov. 13, 2018).

While Pelosi wanted to expedite debate on a major climate bill, one of her top priorities, Dingell wanted a slower process funneled through him.

Dingell was ultimately knocked off the top of the committee by then-Rep. Henry Waxman (D-Calif.) in a dramatic secret ballot vote.

Waxman went on to co-sponsor a broad cap-and-trade bill with then-Rep. Ed Markey (D-Mass.), chairman of the select committee.

The legislation failed to move in the Senate, marking the end of the last major congressional effort to address climate change.

But Dingell voted for it.

Earlier in his career, Dingell was also instrumental in shepherding the Clean Water Act through the House in 1972.

In the 46 years since the Clean Water Act passed, the phrase, known by the acronym WOTUS, has been the subject of constant litigation.

• Is John Dingell the ‘dean of Twitter’? ‘Yooouuuu betcha!’

But in an interview with E&E News two years ago, Dingell said the term was critical to the legislation’s success (Greenwire, June 29, 2017).

"We knew that if you were drinking water in New Orleans, you were drinking what people had for dinner and flushed down their toilets in Minnesota a week or a month before," he said. "We knew water traveled with the stink in it all that way, and we wanted to cover the whole process."

Dingell was one of the few lawmakers to address the change on the House floor: "It means all ‘the waters of the United States’ in a geographical sense," Dingell said.

"It does not mean ‘navigable waters of the United States’ in the technical sense as we sometimes see in some laws."

Dingell’s words have frequently been cited during debates and Supreme Court cases over the scope of Clean Water Act jurisdiction.

A lifelong hunter and longtime member of the National Rifle Association, Dingell worked closely with colleagues from both parties to write the original Endangered Species Act, which passed by an overwhelming margin in 1973.

The law greatly expanded upon the Endangered Species Preservation Act passed in 1966, which provided a means for listing native animal species as endangered and gave them limited protection.

On Jan. 1, 1973, Dingell introduced what he initially called the Endangered Species Conservation Act, leading to negotiation of the final ESA package.

"To this day, I still consider my work on the Endangered Species Act to be one of my proudest moments in Congress," Dingell said several years ago.