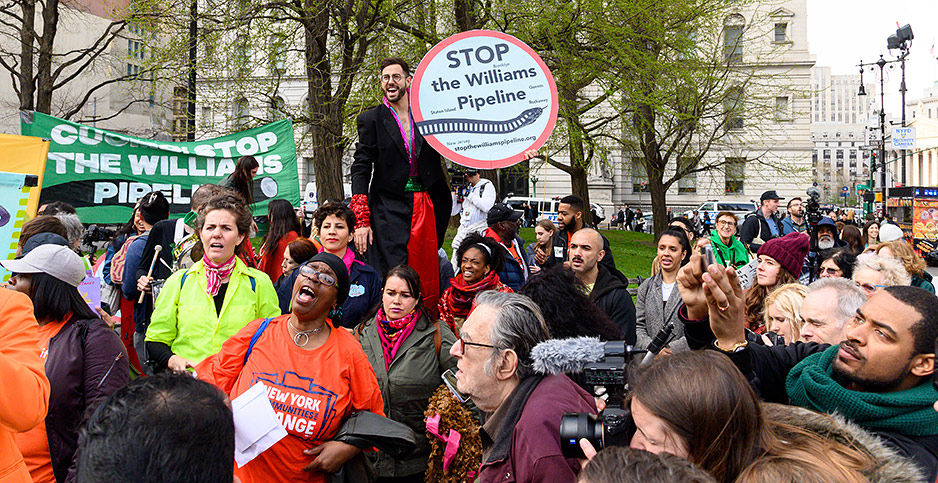 A fight over a major Northeast pipeline proposal is ramping up after developers asked the Federal Energy Regulatory Commission for more time to complete the natural gas project.

Oklahoma-based energy company Williams Cos. is seeking FERC approval for two more years to finish the Northeast Supply Enhancement Project, which would expand the existing Transco natural gas pipeline system in Pennsylvania, New Jersey and New York. Foes of the $1 billion project slammed the request to extend the construction deadline until May 2023.

The dispute is the latest high-profile pipeline battle playing out at FERC, an independent agency charged with overseeing large natural gas and electric infrastructure. Critics have charged that natural gas projects like the Northeast Supply Enhancement proposal and the 303-mile Mountain Valley pipeline in the Virginias aren’t necessary in light of climate risks and the rapid shift to renewable energy in the U.S.

In the request, Williams reasoned that there’s still a market need, citing the winter storm that devastated the Texas power grid in February.

"The importance of adequate and reliable energy supply was made abundantly clear during the recent Winter Storm Uri, which highlighted the impact that extreme weather conditions can have on the electric grid and the critical role that natural gas plays both for residential heating and powering electric generation plants during periods of peak winter demand," the company said.

Williams added in a statement that "we continue to believe that the fundamentals of our Northeast Supply Enhancement (NESE) project align with New York’s clean energy goals to improve local air quality while ensuring access to reliable and affordable energy to meet growing demand."

The project would allow the Transco network to move an extra 400 million cubic feet of natural gas per day to customers — enough to heat over 2 million homes. But plans to build it have faced setbacks due to the "unforeseeable" COVID-19 pandemic, according to Williams’ FERC filing.

It’s unclear what FERC, now under the leadership of Democratic Chairman Richard Glick, will do when it comes to the controversial project, which the agency approved in 2019 (E&E News PM, May 3, 2019). FERC said in a March 22 filing that it will "address all arguments relating to whether the applicant has demonstrated there is good cause to grant the extension" but that it won’t consider arguments that relitigate its 2019 order.

Christi Tezak, managing director of ClearView Energy Partners LLC, noted that Glick has previously supported such deadline extensions, as he did with the Mountain Valley pipeline project last year.

The research firm, however, expects that "FERC would continue to withhold any construction authorizations" until the project secures state-level permits that it’s lacking from New York and New Jersey, Tezak said in an email yesterday.

Williams said the planned project would improve "the resiliency and reliability" of gas service in New York City, particularly during peak winter demand.

In comments submitted to FERC, however, some opponents rejected the company’s mention of Winter Storm Uri as "misleading" and said that even with an extension, the project wouldn’t be able to secure all of its necessary permits.

"This application is alarming because the proposed fossil fuel project would cut through the already polluted and sensitive Raritan Bay and the New York Bay," Tittel said in a statement last month. "An explosion or leak from their proposed compressor station could threaten communities and destroy important habitat while adding even more pollution."

The group Environment New Jersey said that "there is no reason to believe that the environmental and public interests findings underlying" a 2019 authorization from FERC are still valid.

Like many other commenters, the organization pointed to a decision last year from the New York State Department of Environmental Conservation to reject needed water quality permits for the project (Energywire, May 18, 2020).

In a statement, a Williams spokesperson said, "The requested extension will afford Transco the additional time necessary to obtain the required permits and construct the authorized facilities."

Daphne Magnuson, a spokesperson for the Natural Gas Supply Association, said the group supports an extension for the project and is hopeful that FERC will grant one.

She said that "adequate natural gas infrastructure, particularly in constrained regions such as New England," is needed to reliably serve customers.