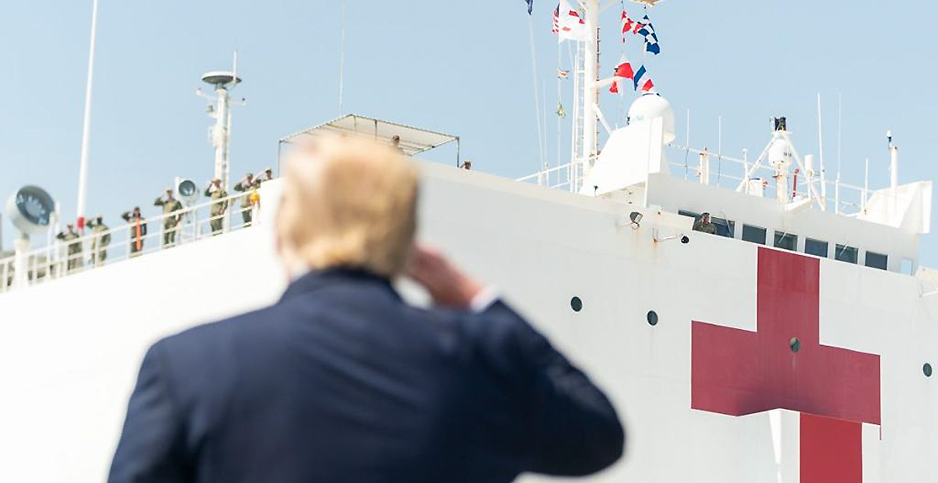 Barack Obama took a thinly veiled swipe yesterday at President Trump for his handling of the novel coronavirus pandemic — warning that future generations would face a similar catastrophe if climate change is left unchecked.

The former president doesn’t often criticize his successor in public, but Obama took issue with the Trump administration’s decision this week to subvert efforts to improve the fuel economy of passenger cars, a major climate initiative of the Obama presidency.

"We’ve seen all too terribly the consequences of those who denied warnings of a pandemic," wrote Obama in a Twitter post. "We can’t afford any more consequences of climate denial. All of us, especially young people, have to demand better of our government at every level and vote this fall."

Obama isn’t the only one who has compared Trump’s response to the coronavirus pandemic to Trump’s dismissal of climate change.

But because the effects of the pandemic are more immediate, the approach may not work as well this time, said Michael Mann, a climate scientist at Pennsylvania State University.

"It exposes the dangers of denial in a much more dramatic fashion," Mann said. "We may look back at the coronavirus crisis as a critical moment where we were all afforded a terrifying view of the dangerous and deadly consequences of politically and ideology-driven science denial. We looked into the abyss, and I hope we collectively decide that we don’t like what we saw."

For weeks, Trump has downplayed the risk of COVID-19, at one point comparing the disease to the common flu. That tracks with Trump’s past dismissal of climate change as a threat.

"The weather has been so cold for so long that the global warming HOAXSTERS were forced to change the name to climate change to keep $ flow!" Trump tweeted in January 2014.

Similar to his climate rhetoric, Trump has turned to conspiracy theories and false claims during the coronavirus pandemic to support a positive political narrative — which in this case is that his administration has ably handled the growing threat.

For example, as Trump faced criticism over the lack of protective equipment provided to hospitals, he shifted the blame — without evidence — to medical workers. Trump suggested they were stealing items such as gloves and masks because of how quickly the supplies were being used.

Then there’s Trump’s dismissal of facts that don’t fit his worldview.

The Trump administration has been blamed for the slow rollout of coronavirus testing, which medical experts say hinders their ability to contain the disease.

But Trump has said that’s not true.

He has falsely said that anyone who wanted a test could get one, despite reports to the contrary. On Monday, he told a group of governors that he wasn’t aware of any testing issues, according to a leaked recording of the call obtained by The New York Times.

"I haven’t heard about testing being a problem," Trump said on the audio.

Trump has long dismissed the science of global warming — including warnings put forward by scientists within his own administration. And Trump has repeatedly undercut climate-friendly policies, which he has said are an overreaction that’s based on science he does not support.

"Is there climate change? Yeah. Will it go back like this, I mean, will it change? Probably, that’s what I think," he once told "Axios on HBO." And while humans may have a role, Trump added that "I don’t believe the impact is nearly what some say."

It remains an open question, however, how much Trump’s record on climate change and the coronavirus pandemic will affect his reelection bid.

But it’s a far cry from the spiking approval ratings of the nation’s governors amid the coronavirus outbreak. Polls show that Gov. Andrew Cuomo (D) of New York has seen his general approval ratings from state voters rise 54 percentage points, Gov. Gretchen Whitmer (D) of Michigan has seen a rise of 30 percentage points and Gov. Roy Cooper (D) of North Carolina has seen a 31-point increase.

In New York, which is now the epicenter of the virus, Cuomo went from being 6 points underwater to a 48-point jump in approval. Trump saw a 7-point swing in that same period, according to a Siena College poll released Monday.

"Traditionally one sees a chief executive get a bump in times of crisis, but this is not normal times and this is not your average president," Siena College pollster Steve Greenberg said.

Trump’s bet that he can use the tools of denialism to minimize criticism of his response to the coronavirus won’t just wound his political career — it may hurt climate denialism in general, argued Jerry Taylor, president of the Niskanen Center.

He said those who ignore scientists at the expense of human health will be held accountable as the world rebuilds from this "generationally scarring event." He predicted it could lead to a larger societal transformation in which the public takes more seriously issues of concern raised by scientists, principally climate change.

"Climate denialism, which looks a lot like coronavirus denialism, is going to take a fatal blow," Taylor said. "If you ask yourself what the narratives are going to be told about this event, it’s going to be that consequences of dismissing expertise, it’s about irresponsible risk management, it’s about the lack of social insurance and the critical problems of dysfunctionality in government."

Yet some Trump supporters see the president’s response to the pandemic as an appropriate counterweight to what they consider an overreaction, much like climate change.

Trump is listening to health experts, such as Dr. Anthony Fauci, but he’s also questioning their assessments, which will help him politically, said Steve Milloy, a member of Trump’s EPA transition team and a longtime opponent of climate policy.

Milloy praised Trump for being skeptical of coronavirus models, much in the same way the president has dismissed climate modeling.

"I think this whole thing has been blown way, way out of proportion, and I think that he is going to come out smelling like roses, he’s going to be the hero," Milloy said. "Criticizing him for no matter what he does is just not going to work out well for them."

There are some signs, however, that Trump is adjusting his message.

In the course of a month — even though the science of the pandemic has not changed — Trump went from saying the disease was contained and would go away in April to recommending that people continue social distancing until May at least. In that same time, Trump went from claiming that U.S. coronavirus cases would be "close to zero" in a couple of days to saying this week that he would consider the deaths of 200,000 Americans an indication of his administration’s success.