Ohio rolls back RPS, boosts nuclear. Here’s why it matters 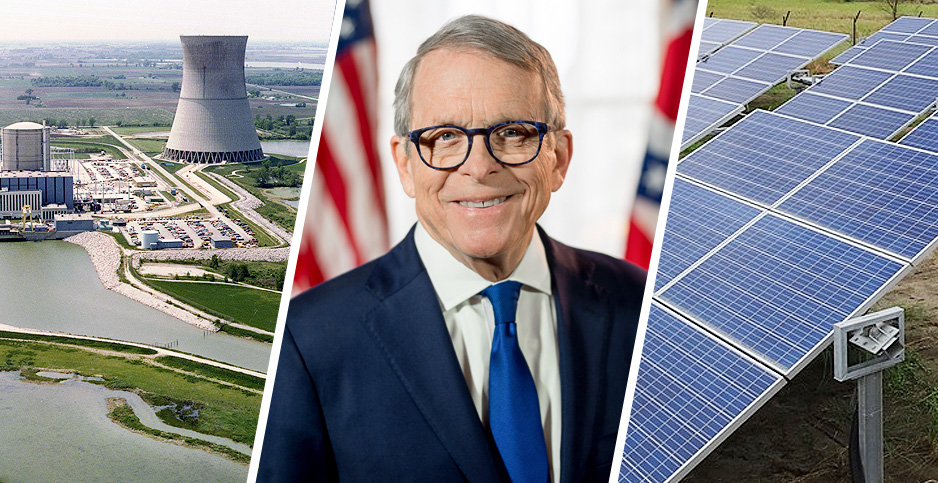 As some states across the United States look to accelerate the move to cleaner energy, Ohio is pumping the brakes.

A state bill that funnels more than $1 billion in subsidies to power plant owners and rolls back renewable and efficiency standards became law yesterday after the state House adopted Senate revisions to the language and Republican Gov. Mike DeWine signed it.

For Ohio — one of the nation’s top emitters of carbon dioxide from the power sector — the long-fought move to freeze clean energy mandates holds far-reaching effects on efforts to combat climate change while offering up potent political messaging both locally and nationally.

The enactment of H.B. 6 ends a lobbying blitz by FirstEnergy Solutions Corp., the bankrupt power producer that has threatened to pull the plug on the Davis-Besse and Perry nuclear plants on Lake Erie starting next year if the Legislature didn’t authorize $150 million in annual subsidies.

The bill also benefits other big Ohio utilities — American Electric Power Co., Duke Energy Corp. and Dayton Power & Light Co., which are shareholders in a pair of 1950s coal plants that are ensured a decade of subsidies to keep running despite the fact that they are bleeding red ink.

DeWine’s signature, coming just two hours after the bill passed, also gives GOP lawmakers, most of whom have received campaign contributions from the utilities, a trifecta of energy policies they’d strived for years to achieve.

For all the criticism of nuclear and coal subsidies from groups ranging from the Sierra Club and consumer groups to Americans for Prosperity and the American Petroleum Institute, critics said the biggest effect of H.B. 6 may be the muting of Ohio’s renewable and efficiency standards.

Some of the nation’s largest wind energy developers have said Ohio’s existing restrictions on turbine placement, enacted in 2014 when the Legislature temporarily froze the renewable standards, have already steered investments to neighboring states. H.B. 6, they warned, would only continue to lessen their interest in the Buckeye State (Energywire, July 12).

While other Republican-controlled states such as West Virginia and Kansas also rolled back renewable standards and Indiana’s GOP-led Legislature eliminated the state’s efficiency requirement, she called H.B. 6 the most audacious reversal of clean energy policy.

"It is the most important rollback of a clean energy bill that’s passed so far," Stokes said.

Nationally, only Delaware gets less of its electricity from renewable resources, she said. Meanwhile, Ohio ranks as the sixth largest emitter of carbon dioxide from the power sector, according to data from the U.S. Energy Information Administration.

First, Ohio is the first Republican-controlled state to enact a nuclear support program. And unlike other states like New York and Illinois that paired nuclear subsidies with policies to support renewable development, H.B. 6 includes provisions to discourage renewables.

The passage of H.B. 6 could have far-reaching effects politically — both locally and nationally.

State legislators who represent districts with the Davis-Besse and Perry plants can tell constituents they saved jobs, but opponents have pledged to seek enough petition signatures to force a referendum to overturn H.B. 6 in November 2020.

Fox said support for coal and nuclear energy and elimination of renewable energy standards line up with the Trump administration’s energy agenda — a point that the president’s critics and supporters will try to leverage.

"President Trump could point to this as an example even though it was enacted at the state level," he said.

In fact, the push to subsidize the nuclear and coal plants in Ohio is actually rooted in a decision by federal energy regulators to block payments to some of the same plants in 2016.

That decision by the Federal Energy Regulatory Commission led Ohio utilities to pursue state-level legislation to support the Davis-Besse and Perry plants and the two 1950s coal plants, which already receive ratepayer support through a separate mechanism approved by state utility regulators.

DeWine, who had advocated for H.B. 6, stands in stark contrast to his predecessor, former Gov. John Kasich (R), who opposed nuclear plant subsidies and vetoed a bill in 2016 that would have continued a freeze on the state’s clean energy laws (Greenwire, Dec. 27, 2016).

H.B. 6 opponents who testified at numerous hearings during the past three months blasted the passage of the bill yesterday.

The bill helps the few connected and moneyed interests that directly benefit from subsidies at the expense of Ohio consumers who are left with the bill, they said.

Ohio Consumers’ Counsel Bruce Weston said the state’s choice to deregulate its retail electricity market should have, and to an extent has, reduced energy prices.

"But ever since the switch to power plant competition, influential utilities have whittled away at it for their own interest in higher profits instead of the public interest in lower electric rates. House Bill 6 is just the latest, though maybe the worst, of the retreats," he said. "Power companies have too much influence in Ohio, and that should be reformed."

"I think anything that raises prices for customers is a problem, and I know that company [FirstEnergy Solutions] has a lot of power in the Legislature," Sen. Sherron Brown (D-Ohio) told E&E News.

Ohio’s utilities, however, said H.B. 6 provides a net benefit to their customers.

"Overall, I think it provides the right framework for a transition to cleaner energy while making sure ratepayers are protected as part of the process," AEP Ohio President Raja Sundararajan said in an interview with E&E News.

Sundararajan said the bill protects existing renewable energy contracts under Ohio’s renewable portfolio standard and promotes new renewable development by setting aside $20 million for utility-scale solar, including a pair of projects for AEP. And falling prices for wind and solar and consumer demand will keep projects coming in Ohio, he added.

Despite the claim by critics, AEP plans to continue to offer cost-effective energy efficiency programs even after the utility is no longer required to do so, said Sundararajan.

Although it’s unclear what elements of AEP’s efficiency programs will be cost-effective in the future as they’re analyzed by the Public Utilities Commission of Ohio, Sundararajan said the programs have been money-savers for utility ratepayers.

Those savings, and similar savings for other utility-run efficiency programs across Ohio, were excluded from the analysis of H.B. 6 by the state Legislative Service Commission.

The cost analysis was cited several times by lawmakers in the state House and Senate as justification for passing H.B. 6. For some GOP legislators who identify as free-market advocates, selling the bill as a reduction in electric rates enabled them to justify subsidies for coal and nuclear plants that they ideologically oppose.

"The Legislature simply ignored the financial benefits of energy efficiency and the fact that efficiency costs less than generation," said Robert Kelter, a senior attorney for the Chicago-based Environmental Law and Policy Center.

"And you’re ignoring the fact that energy efficiency is emissions-free," Kelter said. "They call this clean air legislation and yet they’re bailing out some of the oldest and dirtiest coal plants left."

H.B. 6 proponents argue that rescuing FirstEnergy Solutions’ nuclear plants will help Ohio maintain its largest source of carbon-free electricity for seven more years because natural gas and coal-fired generation would fill most of the void if the reactors shut down.

In isolation that’s true. But opponents argue that weakening clean energy standards will only lead to an increase in emissions. And ensuring that two 1950s coal plants continue to operate for another decade guarantees the plants will continue to emit millions of tons more carbon dioxide and other air pollutants.

Among the other provisions, H.B. 6 authorizes for the next decade surcharges of up to $1.50 a month for the average Ohio residential consumer and up to $1,500 a month for the largest energy users that go to AEP, Duke and Dayton Power & Light to subsidize the operation of two Ohio River Valley coal plants.

The utilities are part of a larger group of eight power companies called Ohio Valley Electric Corp. (OVEC), which signed a pact in 2010 to keep the plants running until 2040. According to FirstEnergy Solutions, which is trying to cancel its obligation to stay in the pact, the plants are losing tens of millions of dollars a year (Energywire, May 25, 2018).

While OVEC’s other owners in Kentucky, Michigan and Indiana can recoup any losses on the plants from ratepayers, utilities in Ohio’s deregulated market have received approval of special subsidies from the Public Utilities Commission to cover their costs.

With no guarantee that the subsidies will be reapproved by regulators, utilities pressed lawmakers to authorize the payments in H.B. 6.

But although backers of the legislation see the measure as a way to keep subsidies flowing, critics only see the monthly surcharges and air pollution from the plants, one of which sits on the other side of the Ohio border.

State Rep. Sedrick Denson (D), who said his district is downwind of the Clifty Creek coal plant in Indiana, added, "Not only are we sending hardworking Ohioans’ money out of the state … we’re also keeping pollution flowing into Cincinnati for at least the next 10 years."