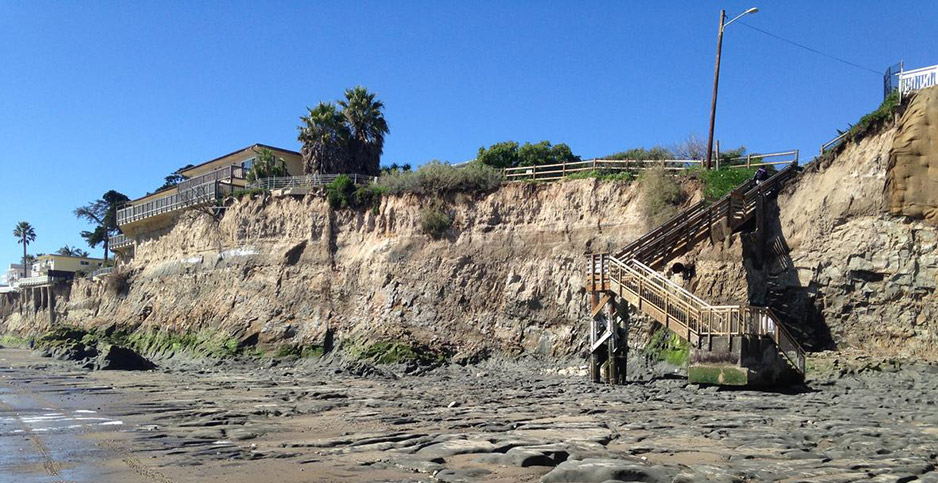 Erosion exacerbated by rising seas is eating away at California beaches. The beach at Isla Vista, Calif., is pictured. Alex Snyder/U.S. Geological Survey

The oil industry is hitting back after being sued for climate damages by California cities and counties.

The Manufacturers’ Accountability Project (MAP), an oil industry supporter, demanded a swath of records from the municipalities that sued more than 20 oil companies. Citing a state public records law, MAP asked for paperwork, cellphone records, reports, memos, payments and other documents containing oil company names. They’re also asking for city contracts with law firms working on contingency, a form of payment that awards a percent of what the firm is able to win.

MAP, an arm of the National Association of Manufacturers, said it wants to expose details of the eight lawsuits against oil companies filed by California municipalities.

"We really believe strongly in transparency. We think that taxpayers have a right to know what’s behind these lawsuits," said Lindsey de la Torre, executive director of MAP. She added that "really what this whole effort is about is trial attorneys and politicians raising their public profile at the expense of manufacturers."

In other cases, San Francisco and Oakland have sued the five biggest oil companies: Chevron Corp., BP PLC, ConocoPhillips, Exxon Mobil Corp. and Royal Dutch Shell PLC. Those are with Judge William Alsup in the District Court for the Northern District of California.

MAP said it’s getting involved because oil manufacturers are among those targeted by climate-related lawsuits. De la Torre would not say whether MAP gets funding from oil companies.

Asked what the group hopes to gain with its efforts, she said that "we really believe that these cases don’t belong in the courts. We believe they belong with policymakers who can look at them from a broad spectrum."

"Instead of owning up to the liabilities and culpabilities of issues of climate change, they’re carrying out a very specific and targeted campaign of me and others. That’s very clear," said Serge Dedina, mayor of Imperial Beach. "This is part of the fossil fuel industry playbook."

Exxon Mobil also filed a court petition in Texas asking for the right to depose 16 people: Dedina and other California officials, including mayors, city managers and city attorneys. The filing is seen as a signal that Exxon might countersue. The company is based in Texas, whose laws allow companies headquartered there to seek protection against lawsuits.

It comes in the wake of a separate legal defeat for Exxon. The company filed suit to stop Massachusetts and New York attorneys general from investigating whether the oil giant knew about climate risks and didn’t disclose them to shareholders. Valerie Caproni, a federal judge in Manhattan, said Exxon’s request to halt the investigations was based on "extremely thin allegations and speculative inferences."

MAP struck back against that, too. In a blog, it said the investigation by New York Attorney General Eric Schneiderman (D) "is part of that expensive patchwork that politicians and plaintiffs’ attorneys are perpetuating. We need less litigation, not more."

MAP said attorneys handling the lawsuits "shopped them around" to multiple cities across the country.

Sher Edling LLP — which represents Imperial Beach, Marin and San Mateo counties, Richmond, Santa Cruz, and Santa Cruz County — did not specifically respond to a question on how the firm connected with the cities and counties it represents.

"Each of our clients was working on climate change vulnerability assessments or adaption plans," Matt Edling, a partner at the firm, wrote in an email. "We have worked as counsel with local governments in California and around the country for decades."

Dedina in Imperial Beach said his city sued after completing a sea-level-rise vulnerability study in 2016. That analysis "led to conversations about how to pay for the adaptation that would be needed. I’ve been involved in conservation efforts for a couple decades and have lots of relationships in the area, one of whom suggested that we talk to Sher Edling."

The cities and counties have largely denied MAP’s requests for documents. Brian Washington, county counsel of Marin County, said the records fall under the rules of attorney-client communications and can be kept confidential.

Not all of MAP’s requests were rejected. San Francisco turned over its contract with law firm Hagens Berman Sobol Shapiro LLP, which represents Oakland and San Francisco. That contract said the firm would keep 23.5 percent of damages, plus certain costs. The remaining 76.5 percent would go to San Francisco for "abatement, adaptability, and other costs related to the global warming injuries at issue."

"They stand to gain a lot of money in these lawsuits," de la Torre said of the law firms. While the firms’ percentage might not be as high as in other lawsuits, "the damages they’re seeking are very high." Some of the suits claim that climate damages could amount to billions of dollars over several decades.

Hagens Berman Sobol Shapiro did not respond to requests for comment. On the issue of attorney fees, Dana McRae, county counsel for Santa Cruz County, which is represented by Sher Edling, said the cases are aimed at "ensuring that our taxpayers aren’t on the hook for climate-change-related damages knowingly caused by these fossil fuel companies."

"Our outside counsel only gets paid if we prevail in court, so if MAP and Exxon are so confident that our lawsuits have no merit, let’s just go to trial and see who is right," McRae said. "If MAP is really so concerned about attorney fees, they should start with the lawyers for Exxon and the other defendants. Those lawyers get paid for every six minutes they work, at rates that are upward of $1,000 an hour or more."

Exxon’s paperwork in the Texas court outlines what it claims is a connection between the oil suits and Steyer. It references a 2015 legal strategy document on suing oil companies from Pawa Law Group and attorney Matt Pawa. He’s now a partner at Hagens Berman Sobol Shapiro. Exxon calls Pawa an "architect" of the strategy to sue oil companies for climate damages, in the vein of earlier suits against tobacco companies.

That 2015 memo by the Pawa Law Group was sent to two executives at Steyer’s NextGen Policy — Chief Operating Officer Dan Lashof and attorney David Weiskopf. The Daily Mail first reported that connection in November 2017. The memo outlines how the cases could be filed in state court to avoid the federal precedent in American Electric Power Co. v. Connecticut, which said that corporations cannot be sued for greenhouse gas emissions because EPA regulates them through the Clean Air Act.

Seeking climate damages from oil companies wasn’t new for Pawa at the time. In 2004, he was one of the attorneys who sued to cap power plant emissions in the AEP v. Connecticut case. In 2008, he joined those suing in the Kivalina v. ExxonMobil Corp. case. That suit sought damages from Exxon and 23 other energy companies for contributing to flooding that was forcing the relocation of an Alaskan Native tribe. The oil companies won.

Pawa declined to comment. A Steyer spokesman confirmed that Lashof and Weiskopf received the memo. The spokesman said that Steyer is not involved with the California lawsuits.

"Tom Steyer is not personally pushing the #ExxonKnew effort, though our teams on the ground did participate in rallies or events in the past to support our coalition partners," the spokesman said.

MAP’s de la Torre said Steyer is named in the records requests because "it’s just part of our fact finding. … We want to continue to look into his involvement."