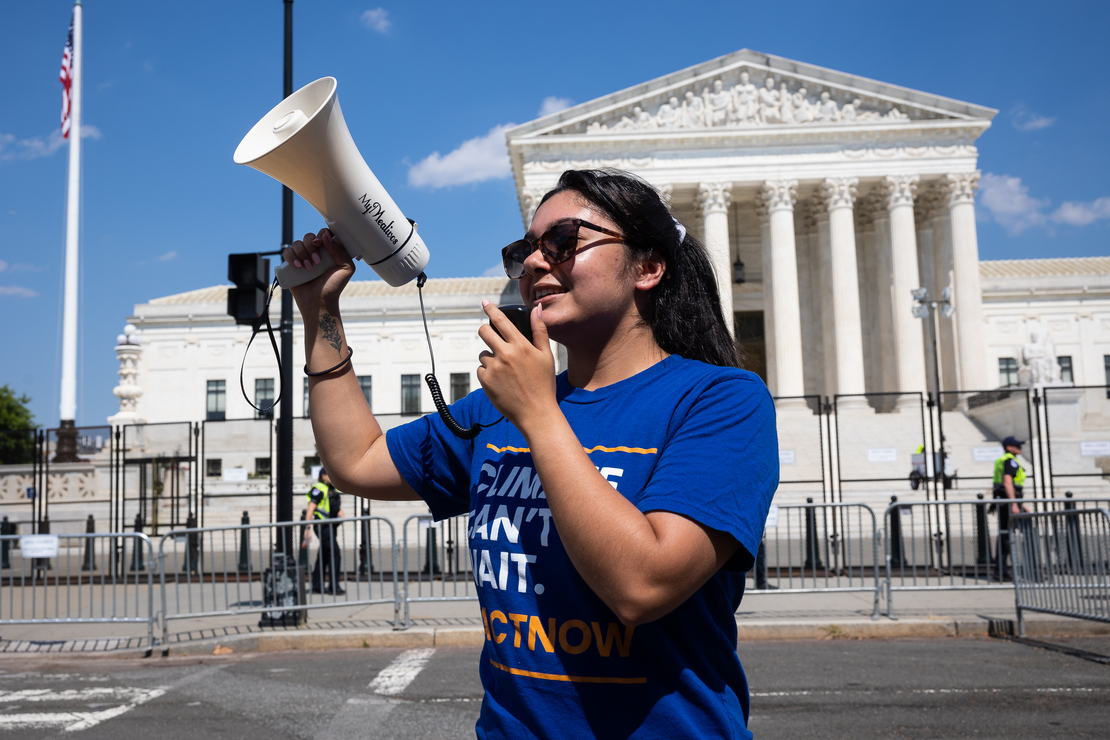 Bernadette Badamo, an activist with the Climate Action Campaign, protests in June outside the Supreme Court. Francis Chung/E&E News

The Supreme Court is poised to decide whether to wade into another fight between fossil fuel producers and nearly two dozen U.S. cities, states and counties suing the industry for climate change damages.

At issue Wednesday — as the Supreme Court holds its first conference of a new term — is if the court will take up the industry’s request to move from state to federal court lawsuits that seek to hold fossil fuel producers financially liable for climate change.

It’s a venue dispute with huge consequences, and it comes as a federal appeals court on Friday became the latest to signal skepticism about the industry’s efforts to transfer the cases to federal court, where producers believe they have a better chance to prevail.

The Supreme Court in a narrow ruling last year sent the cases to the federal courts for review, and most federal panels since have ruled that the lawsuits should be heard by state courts (Greenwire, May 24, 2021).

Even Judge Richard Sullivan, who wrote a 2021 decision for the 2nd U.S. Circuit Court of Appeals that found that New York City’s claims in a climate lawsuit were preempted by federal law, voiced doubts Friday as an attorney for Exxon Mobil Corp. argued before the 2nd Circuit that a case brought by the state of Connecticut should be heard in federal court.

“Connecticut cannot dispute, and its complaint clearly reflects, that it is seeking monetary relief for, in its words, ‘the catastrophic harm caused by global climate change,’” Exxon attorney Kannon Shanmugam said. The partner at Paul, Weiss, Rifkind, Wharton & Garrison LLP argued that the state is trying to regulate emissions that are regulated by the federal Clean Air Act.

“Here we’re dealing with something very different, which is removal,” Sullivan said of the Connecticut case. “And it’s a tougher road to hoe under removal.”

Sullivan, an appointee of former President Donald Trump, also noted that “unless federal common law completely preempts the field, it seems to me that there’s a real problem here, because we would generally trust state courts to work this through.”

Shanmugam told the court that the “breadth of the remedies” sought by the lawsuit “underscores that this is a lawsuit for injuries caused by worldwide greenhouse gas.”

But Judge Myrna Pérez, an appointee of President Joe Biden, told him that the companies appear to be asking the court to develop “new laws,” including that an “overzealous remedy can somehow convert a state law claim into a federal claim.”

Judge William Nardini, another Trump appointee, said that 40 years of case law regarding removal of cases makes it “pretty tough to remove when someone has pleaded purely state claims.”

Connecticut’s case alleges that Exxon violated the state’s Unfair Trade Practices Act by waging a “campaign of deception” that misled consumers about the climate impacts of its petroleum products (Greenwire, Sept. 14, 2020).

Still, even as the judges appeared unwilling to move the case to federal court, they suggested that Connecticut could have a hard time obtaining compensation.

“They’re seeking all kinds of relief, but it might get carved up,” Sullivan said of the state’s claims. “The state court might say ‘You’re not entitled to all the damage from global warming over the last half century or couple of centuries.’ “

Perez asked whether the fact the relief sought is “a little bit tenuous” helps the industry’s argument in that “it makes it seem more like you’re actually trying to regulate as opposed to actually getting something concrete.”

Shanmugam noted that the Supreme Court on Wednesday will take up a request from Suncor Energy Inc. and Exxon to review a similar climate case filed in Colorado (Climatewire, June 9).

“We may or may not have guidance as to whether or not the Supreme Court thinks that it should intervene at this point,” Shanmugam told the judges. “In our view, there are circuit conflicts on these issues in this context, and more broadly. And so these are issues that I think, inevitably, the Supreme Court will have to resolve.”

It takes the votes of four justices to grant a petition, and the Supreme Court rejects most cases that come its way.

The fight over where the climate liability lawsuits should be heard has stymied action for years as municipalities across the country have gone to court seeking payment from the oil and gas industry for the effects of planet-warming emissions.

The suits were mostly filed in state courts, but industry has sought to move them to federal benches, where a judge could find that the municipalities’ claims are preempted by federal law.

The latest petition to the Supreme Court was filed in June by Suncor and Exxon asking the court to review a 10th U.S. Circuit Court of Appeals decision that delivered a victory to three Colorado governments.

The industry argues that by taking up the Colorado case, the high court could prevent the climate liability cases from being allowed to “gallop ahead in state court for an indefinite time.”

The companies also contend that the Colorado case is “uniquely positioned” as the first to return to the Supreme Court after the justices in BP PLC v. Mayor and City Council of Baltimore last year directed lower benches to consider a broader set of arguments in favor of federal jurisdiction, handing an incremental win to the oil and gas industry.

The 10th Circuit, which decided the Colorado case, was the first to find that a climate liability lawsuit still belonged before state judges after the Baltimore decision sent all the cases back. Several other appellate courts since have followed suit and ruled in favor of the governments.

Industry attorneys, however, argued in the Supreme Court petition that “given the stakes in the climate-change litigation, the questions presented here are some of the most consequential jurisdictional questions currently pending in the federal courts.”

Attorneys for Boulder, Colo., have told the Supreme Court that the justices should stay out of the dispute until there is a conflict among the circuit courts.

“If petitioners are ever able to convince a circuit to accept their position, this court can decide whether to intervene at that time,” the Colorado attorneys told the court in August (Climatewire, Aug. 11).

And the industry lawyers told the Supreme Court that the Colorado lawsuit involves a smaller group of defendants than the other climate liability cases “and thus is less likely than those cases to present recusal issues.”

Recusals were a problem when the Supreme Court decided BP v. Baltimore last year. Justice Samuel Alito, who holds stock in two other companies involved in the Baltimore climate litigation, stepped back from the proceedings.

The American Petroleum Institute has urged the court to take up the Suncor and Exxon petition, arguing in a friend of the court brief that “ad hoc and unpredictable decisions of individual state courts, seeking to govern the worldwide conduct of a handful of individual defendants, are not a sensible way to address issues of this scope and magnitude.”

Indiana Attorney General Todd Rokita and 15 other Republican attorneys general also have called on the court to take up the matter, dubbing the climate lawsuits that have been filed in mostly Democratic-led states a “menace to coherent law, politically accountable government, and federalism.”

The attorneys general say that although state courts are “critical for remedying local injuries arising from local conduct, … their capacities to evaluate the costs and benefits of local economic activity makes them ill-suited to impose standards for greenhouse gases emitted elsewhere, even if those out-of-state emissions have some attenuated local effect.”