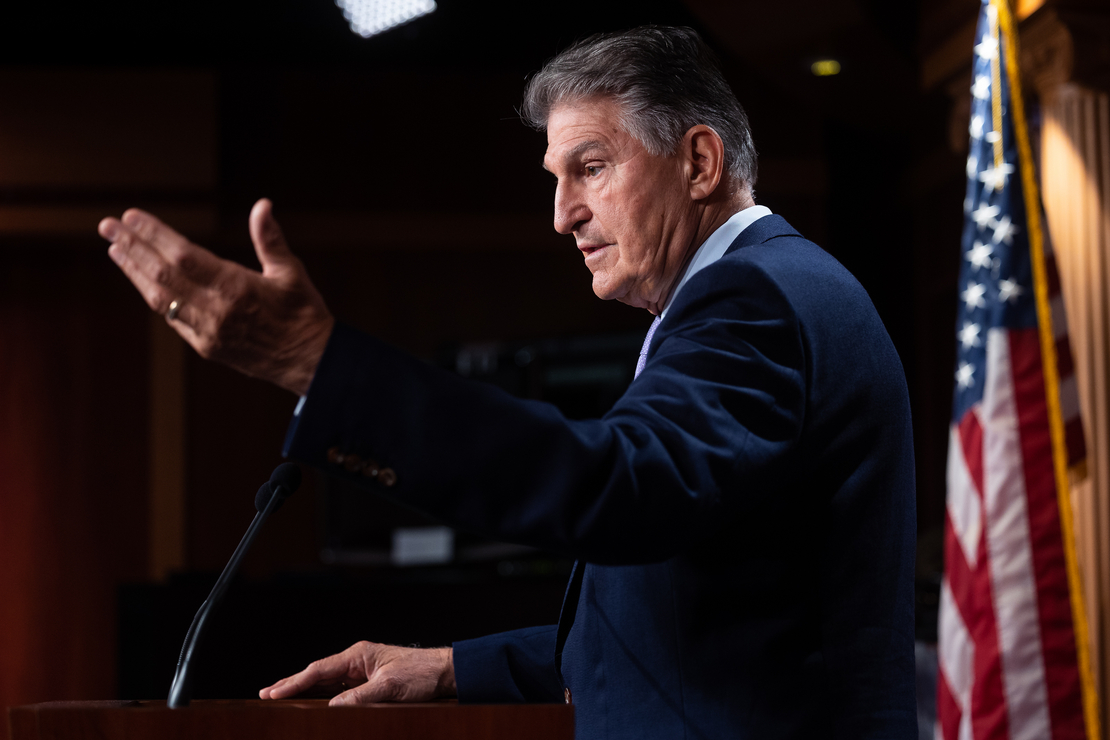 The transition to a clean energy economy will involve trade-offs. Few are as stark as those in the permitting bill unveiled Wednesday by Sen. Joe Manchin, the West Virginia Democrat.

The bill could provide a significant boost to transmission infrastructure, which is needed to ensure widespread renewable adoption. Where permitting a transmission line can now take a decade, the bill would limit federal environmental reviews to two years, put a statute of limitation of 150 days on legal challenges and give the Federal Energy Regulatory Commission more authority to permit transmission lines.

But Manchin’s proposal could also lead to the construction of more fossil fuel projects, producing more greenhouse gas emissions and blunting attempts to green the U.S. economy. It would expand a program aimed at expediting federal permitting reviews to include offshore oil leases and approve the Mountain Valley pipeline, which would carry natural gas from West Virginia into Virginia.

Whether the proposal can survive the House and Senate is an open question. The bill has scrambled traditional political alliances. Republicans and progressive Democrats are opposed. Clean energy developers are supportive. Most, though not all, environmentalists are against it.

Greg Wetstone, president and CEO of the American Council on Renewable Energy, said permitting reform is needed to fully realize the emission-cutting benefits of the climate spending law Congress passed earlier this year.

“Senator Manchin’s bill includes provisions that will help streamline the transmission approval process, improving our ability to meet our nation’s decarbonization goals by better connecting our key renewable resources to our largest population centers,” he said in a statement.

“You can still see fossil fuel’s fingerprints all over the text: shortened public comment periods, fewer avenues for communities to fight back against projects polluting their communities, and weakened enforcement of bedrock environmental and public health laws,” said Grijalva, who chairs the House Natural Resources Committee. “These dangerous permitting shortcuts have been on industry wish lists for years.”

The thorny question of how to permit large-scale energy infrastructure in America is likely to remain, regardless of whether the bill passes or not.

Much of the climate benefits from permitting reform come from transmission. Integrating more wind and solar will require more long-range power lines that can move power from where it is being generated to the population centers where the electricity is being consumed.

The National Academies of Sciences, Engineering and Medicine says the U.S. needs to boost transmission capacity 60 percent by the end of the decade to put the country on track for net-zero emissions by 2050.

The U.S. has a checkered history of transmission development. It has had some success building new lines, particularly in the Midwest, where 16 of 17 projects planned over the last decade were permitted.

But the country has also encountered a series of high-profile failures. An attempt to build a transmission line carrying hydropower from Canada into New England was first rejected by New Hampshire and then nixed by voters in Maine, only for the state’s high court to open the door for the project again. It remains in limbo (Climatewire, Sept. 6).

A $4.5 billion line bringing wind from the Oklahoma Panhandle to Tulsa was scrapped in 2018, eventually replaced by a slightly scaled-back version of the project.

Perhaps most infamous was an eight-year effort to build a 700-mile line connecting Oklahoma wind power to the East Coast via Tennessee. The project died in 2017 but not before its trials and tribulations were captured in the popular book “Superpower” by Texas Monthly reporter Russell Gold.

Even when projects do succeed, it can take years. The Anschutz Corp. began planning a 732-mile line aimed at bringing Wyoming wind to Southern California in 2008. It received its last permit in 2020 after obtaining approvals from the Forest Service, Bureau of Land Management and Bureau of Reclamation, along with state and county regulators in four states. The project is still waiting on a notice to proceed from BLM, which is expected to arrive next year.

“Delayed action by Congress and the Biden Administration to enact permitting reform risks losing the full impact of the clean energy investments included in the Inflation Reduction Act, as well as the bipartisan Infrastructure Investment and Jobs Act and bipartisan Energy Policy Act of 2020,” said Lisa Jacobson, president of the Business Council for Sustainable Energy. “Congress has a window to act now, and we must take advantage of it.”

Manchin’s bill builds on last year’s bipartisan infrastructure deal, which gave the Energy secretary expanded power to designate transmission lines of national interest. The permitting proposal would give FERC the authority to oversee transmission construction and approve projects deemed in the national interest. It would also allow FERC to exercise eminent domain on state land.

“The bill might drive hundreds of millions of tons of carbon reductions. The IRA is expected to reduce emissions by 30-45 percent. Expanded transmission infrastructure is a key variable for getting to the high end of that range, or beyond it, at lowest cost,” he said.

But if the transmission reforms would benefit the climate, critics said other parts of the bill would lead to more emissions.

Proposed amendments to the Clean Water Act would give states less time to act on permit applications. States have, in the past, relied on the Clean Water Act to reject fossil fuel projects. The bill would limit National Environmental Policy Act reviews for major projects to two years and smaller project reviews to one year.

Offshore oil leases, meanwhile, would qualify for FAST-41, a federal program designed to expedite federal permitting reviews. And it would approve the Mountain Valley pipeline, which has long been a target of climate activists.

Peter Erickson, a researcher at the Stockholm Environment Institute, said Manchin’s permitting deal would likely be a net positive for emissions if its fossil fuel provisions were limited to approval of the Mountain Valley pipeline. But the emissions benefits would be eroded by provisions that would make it easier to produce oil and gas from federal lands or waters, he said in an interview before the details of Manchin’s proposal were released.

“It’s hard to know what would happen or not happen as a result of this deal,” he said. “There is so much uncertainty.”

Permitting reforms that enable investment in clean energy and fossil fuel infrastructure are consistent with the push for net-zero emissions, said Arne Olson, an analyst at Energy and Environmental Economics.

The U.S. needs a massive build-out of clean energy infrastructure to meet the country’s energy needs and slash emissions, he said. In the meantime, it will continue to rely on natural gas, in particular, to keep the electric grid functioning. That will require continued investment in gas resources.

“We’re going to need reliable energy supplies before, during and after the transition to clean energy,” Olson said. “The way to make it easier to transition from fossil fuels is to give people a good alternative, and fossil fuels is something you can phase out over time.”