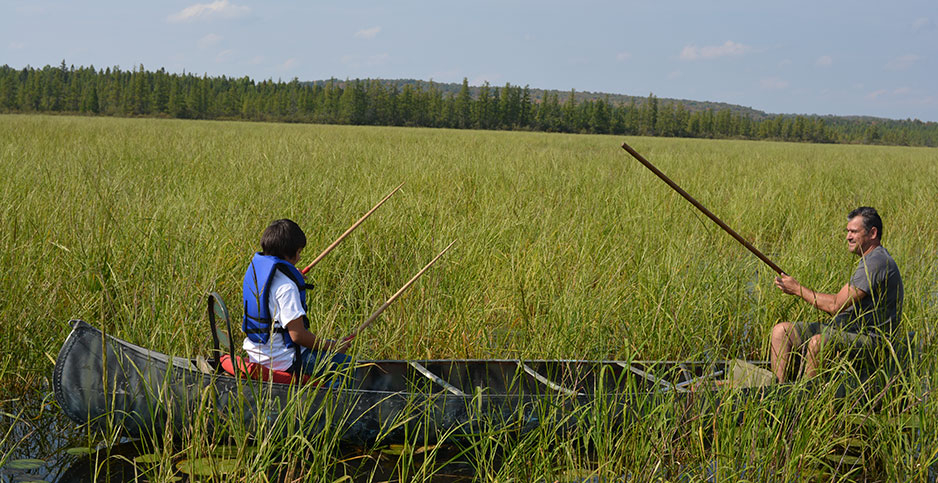 LAC DU FLAMBEAU, Wis. — The Ojibwe people of modern-day Michigan, Minnesota and Wisconsin have for 1,000 years adhered to a spiritual prophecy to live "where food grows on the water."

That food is native wild rice, or "manoomin" in the Anishinaabe language of the Ojibwe.

But with an increasingly unpredictable climate across the "Five Freshwater Seas," as the Great Lakes are known, the Ojibwe’s ancient wild rice traditions are being undermined.

So is the prophecy that ordained it.

"We are here to honor our spirit relatives, which includes all creation. Wild rice is considered sacred," said Eric Chapman Sr., a council member of the Lac du Flambeau Band of Lake Superior Chippewa Indians and director of the Wisconsin tribe’s wild rice cultural enhancement program.

The word "Chippewa," imprinted on the Ojibwe in 19th-century treaties with the United States, is not favored by the tribe, whose origins lie with the Algonquin tribes of North America’s eastern forests.

The Ojibwe were among several Algonquin tribes to migrate to the Great Lakes after the first of the "Seven Fires Prophecies" warned that the tribe would be destroyed by an invader from the sea. That invader is widely interpreted to be Europeans, according to Chapman.

The Great Lakes offered a new life for the early Ojibwe, one built around hunting, fishing and gathering. The tribe is still recognized for some of its long-standing traditions: fur trapping, syrup making, and the construction of birch bark canoes and dome-shaped traditional homes called wigwams.

Yet few of these traditions are as culturally or religiously important as native wild rice harvesting. Its steep decline in small lakes on reservations has fostered uncertainty and even fear among many Ojibwe. Elders and spiritual leaders are attuned to the environmental crisis and praying for wisdom to guide tribal resource managers toward solutions, officials say.

Evidence of climate change is clear, they say, but countering what experts say could be an ecological collapse remains difficult, even as changing conditions make wild rice more vulnerable year after year.

"What’s incredibly frustrating is it’s very hard to tell exactly why a lake becomes impaired," said Crystal Ng, a University of Minnesota hydrologist and wild rice expert who works closely with the Ojibwe. "There are ideas, but we don’t yet have the answers."

Scientists do know that wild rice, which grows in shallow lake water, needs a hard winter freeze and low temperatures to germinate in the spring. Minnesota is one of the fastest-warming states in the country, scientists say.

Climate change concerns are rising in another sphere, too: the planned construction of an oil pipeline through the heart of Ojibwe territory in northern Minnesota.

Ojibwe leaders, while seeking a life bound to nature and spirituality, are increasingly being thrust into a conflict they never sought and energy regulatory processes in which they have little trust.

But wild rice is preeminent.

At the tribe’s 86,500-acre Lac du Flambeau reservation in northern Wisconsin, written and oral history passed down through generations indicates wild rice was harvested from many of the shallow lakes and rivers that pepper the reservation about 220 miles north of Madison.

Today, rice grows on just two lakes within the reservation, and only one of them is harvestable, said officials with the Lac du Flambeau wild rice cultural enhancement program.

Rice yields have also dropped precipitously. Surveys from the 1920s show that Lac du Flambeau’s freshwater lakes produced roughly 200 pounds of rice per family, enough to carry the tribe through the long winter and spring. Today, a family does well to harvest 80 pounds of rice, and that number is going down every year.

"Especially over the last couple of years, we’ve seen big drops," said Chapman, 54, who has lived his entire life on the Lac du Flambeau reservation. "By midcentury, it might be wiped out."

Experts say some of the decline is explained by activities like logging, dam building and river channelization. Increasingly, though, wild rice is succumbing to more nuanced environmental changes: air and water temperature variability, extreme rain events, and changes in water chemistry associated with shoreline erosion.

"When there’s a problem for wild rice, there are wider implications throughout the ecosystem," Ng said in a seminar last year. "So for all these reasons, wild rice really serves as a flagship for both environmental preservation and for indigenous resource sovereignty."

Record-high water levels on the Great Lakes have also been a factor. Some of the most productive wild rice beds are in Lake Superior sloughs and backwaters. High water can wipe out a year’s harvest.

Wild rice is also highly adapted to conditions in smaller lakes, where even subtle variations in water levels, temperatures and chemical composition can render a lake uninhabitable for the plants.

"There are lakes that are just filled with it," Ng said of the aquatic weed. "They actually go in and cut it. It doesn’t seem to be helping."

Native rice plants are at greatest risk during what’s called the "floating leaf stage" in midsummer, when the plants break the lake surface and begin flowering. A shock of precipitation from an extreme weather event can raise lake levels and pull the rice plants’ roots from the lake bottom, causing mass die-offs.

The Ojibwe have witnessed these changes for years, but only recently has the problem become recognized by nontribal scientists and wildlife agencies. There’s a reason for that.

Michael Dockry, an assistant professor at the University of Minnesota and a co-investigator on the wild rice research effort, said tribes like the Ojibwe "have been marginalized in discussions around climate change." He said new research must merge traditional knowledge with scientific methods.

"The tribes are leading us now," Dockry said, "not only in the questions we’re asking, but in the data we’re collecting and our analysis of that data."

At Lac du Flambeau, what Ng called "indigenous sovereignty" has manifested itself in programs to elevate and restore wild rice’s importance among tribal members, young and old. It also means gaining a deeper understanding of climate change and its impacts on Ojibwe ways of life.

Much of that work will be done by the Lac du Flambeau Resilience Initiative, which aims to "take the lead to develop plans that the tribal government and community can use in everyday life." The tribe-led project will seek to integrate Western scientific knowledge about climate change with what tribal members have observed over generations.

"I don’t have no fancy degree, but years of being able to hunt, fish and gather and see these changes firsthand," Chapman said. "These things are important, and we’d like to be able to keep doing them into the future."

The Ojibwe horizon for addressing climate change is also much longer than for many nonnatives, who often say they are motivated to preserve the environment for their children and grandchildren. The Ojibwe believe their responsibility to protect the Earth carries forward seven generations.

Chapman noted that today’s wild rice decline is occurring seven generations after the Lac du Flambeau reservation was founded in 1854.

"We have to start paying respect to those other spirit relatives that were put here to provide for us," he said.

Others have distilled the message to a bumper sticker — "Save Our Wild Rice" — that adorns pickups and entryways on the reservation, which like other small cities supports a downtown district, residential neighborhoods, tribal government offices, historic sites and parklands.

"I think the biggest thing is right now … understanding that a lot of people still practice a subsistence lifestyle. They’re out hunting, fishing and gathering for personal use, for ceremonial use, for feasts and funerals and all kinds of activities, and they’re tied to the land in a deep way," Croll said in an interview.

"Your average recreational angler or hunter isn’t going to feel the effect [of climate change] the same way because it’s not a piece of their culture that they’re trying to hang on to in the face of years and years of basically oppression by the government."