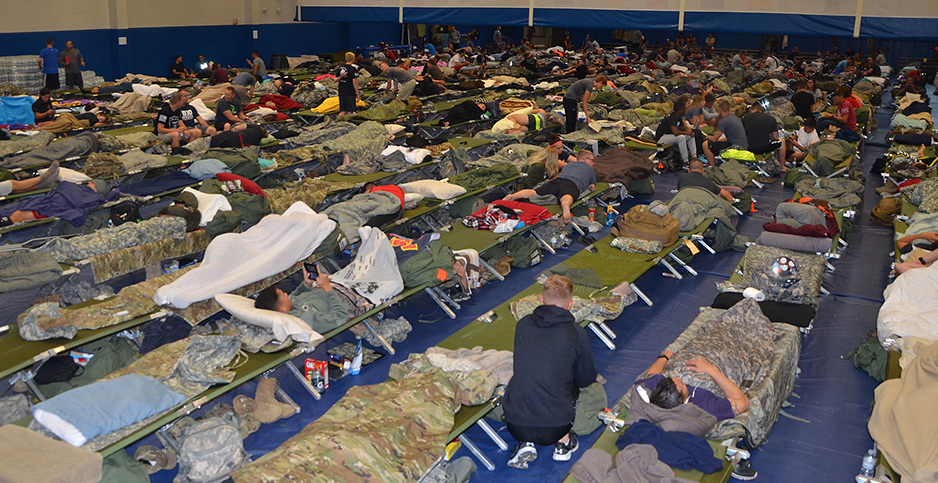 CDC issued guidance on ensuring safety in hurricane shelters during the COVID-19 pandemic. A shelter at Naval Station Guantanamo Bay during Hurricane Matthew in 2016 is pictured. U.S. Navy/Flickr

With hurricane season in full swing, the Trump administration’s public sidelining of the Centers for Disease Control and Prevention during the coronavirus pandemic could stoke fears about the safety of hurricane shelters, experts worry.

The nation’s top public health agency has been at the center of debate over whether to reopen the nation’s schools. Last month, the agency downplayed the risks of schools reopening following weeks of pressure from President Trump, who said the CDC’s original guidance was "asking schools to do very impractical things."

The CDC has also issued official guidance on how to ensure hurricane shelters are safe, with many municipalities relying on the documents to prepare for storms this season. While that guidance hasn’t attracted the president’s ire just yet, the public debate over schools has eroded trust in the CDC, and some fear the public won’t think shelters are safe when the time comes to evacuate.

"If the question of ‘maybe these scientists have an agenda; maybe this is a partisan area’ gets into people’s minds while they are trying to decide whether to evacuate, that’s not good," said Anita Desikan, a research analyst for the Union of Concerned Scientists’ Center for Science and Democracy. "Science shouldn’t be partisan, and this could endanger people’s lives in an emergency situation."

The CDC did not respond to requests for comment.

To be sure, there are many reasons folks might be wary of evacuating to a shelter during a pandemic. While the CDC has recommended that emergency managers use congregate shelters only as a last resort and instead favor hotels or dormitories to ensure social distancing, multiple municipalities, including Houston and New Orleans, still intend to use stadiums and arenas as shelters.

That could prove intimidating to people, especially in states that have only recently adopted mask mandates, said Dr. Georges Benjamin, executive director of the American Public Health Association.

“People who are concerned about the educational guidance they got for schools might transfer those concerns to the guidance for emergency preparedness.”

"People who understand what’s going on are going to be concerned no matter what about being in a large congregate setting with other people they don’t know, or with people who may not want to wear masks," Benjamin said.

Still, he said, he believes the public debate over the CDC’s guidance for schools will likely worsen the issue.

In particular, he faults the CDC for taking evidence that children younger than 10 are unlikely to infect others with the coronavirus and "spinning it out in a political way" to make it seem as though all school-aged children are less contagious.

"Normally, CDC would have parsed that very carefully," he said.

While he thinks the CDC has done a good job on its guidance for natural disaster shelters during the pandemic, Benjamin said, "I have concerns about the erosion of trust."

"People who are concerned about the educational guidance they got for schools might transfer those concerns to the guidance for emergency preparedness, even though, as far as I can tell, the non-health people haven’t messed with it yet," he said.

It’s not exactly clear what role trust in the CDC has played in decisions to evacuate thus far this hurricane season.

Texans largely eschewed shelters during Hurricane Hanna in late July, but those numbers are in line with what local officials expected for a Category 1 storm (Climatewire, July 28).

"We’ve got a lot of people really scared because of the COVID situation, and they will stay at home," Edward Conrow, emergency manager in Brunswick County, N.C., said in an interview.

Rebecca Thompson, a postdoctoral scholar in the University of California, Irvine’s Department of Psychological Science, has studied the factors that motivate people living in hurricanes’ paths to evacuate.

One big consideration, she said, is their "risk perceptions." People who think the storm will cause more damage to their homes are usually more likely to evacuate, she said, with those who have installed storm shutters less likely to leave home.

"Obviously, this is a completely unprecedented situation, but that’s a place where you would find tension for people if they see a storm is coming, and perhaps it’s a storm where they might ordinarily evacuate, but if they don’t have a safe place to go, or are worried it won’t be safe because of COVID, they might decide to stay where they are."

Katie Huffling, a registered nurse and executive director of the Alliance of Nurses for Healthy Environments, said she fears the public politicization of the CDC’s school reopening guidance would sow more mistrust of shelters.

"It’s public health 101 to have clear, consistent messaging, especially during fearful times. Having a consistent message helps people be able to follow them and helps them trust the information they are being given," she said. "When you have a president and high-level government officials minimizing the risks and saying we don’t need to do these things in one setting, it will become a problem in another setting."

Desikan, at the Union of Concerned Scientists, noted that this is not the first time politics has intervened at the CDC.

In 2017, the agency canceled a conference on climate and health shortly after President Trump was elected in order to avoid the administration’s ire (Climatewire, Jan. 23, 2017).

"If we are seeing infectious disease science getting sidelined — and climate science has been sidelined in the past — then it’s normal to fear that scientists who try to speak on both issues are inevitably going to be sidelined," she said.

A 2018 survey by the Union of Concerned Scientists asked scientists across the federal government whether they had ever experienced political interference.

More than 600 of the CDC’s 10,531 scientists responded to the survey. Of those, 48% said consideration of political interests hindered science-based decisionmaking, with more than 13% citing the influence of the White House.

Howard Frumkin, who served as special assistant to the CDC director for climate change and health from 2005 to 2010, said the agency has long been slow to act on climate change because it is so large and complex, "with people at many levels who can say no to an initiative."

"In that context, it takes clear-eyed, committed senior leadership to move a controversial initiative forward," he said. "For over a decade, climate change hasn’t had that kind of support from CDC’s senior leadership."

The agency, he said, has "suffered from long-standing micromanagement" from the White House under multiple administrations, and "active suppression" under Trump.

"That makes it difficult for CDC to be forthright and effective in addressing public health threats that happen to be politically controversial," he said. "This has long been true for climate change, just as it’s now true for COVID-19."