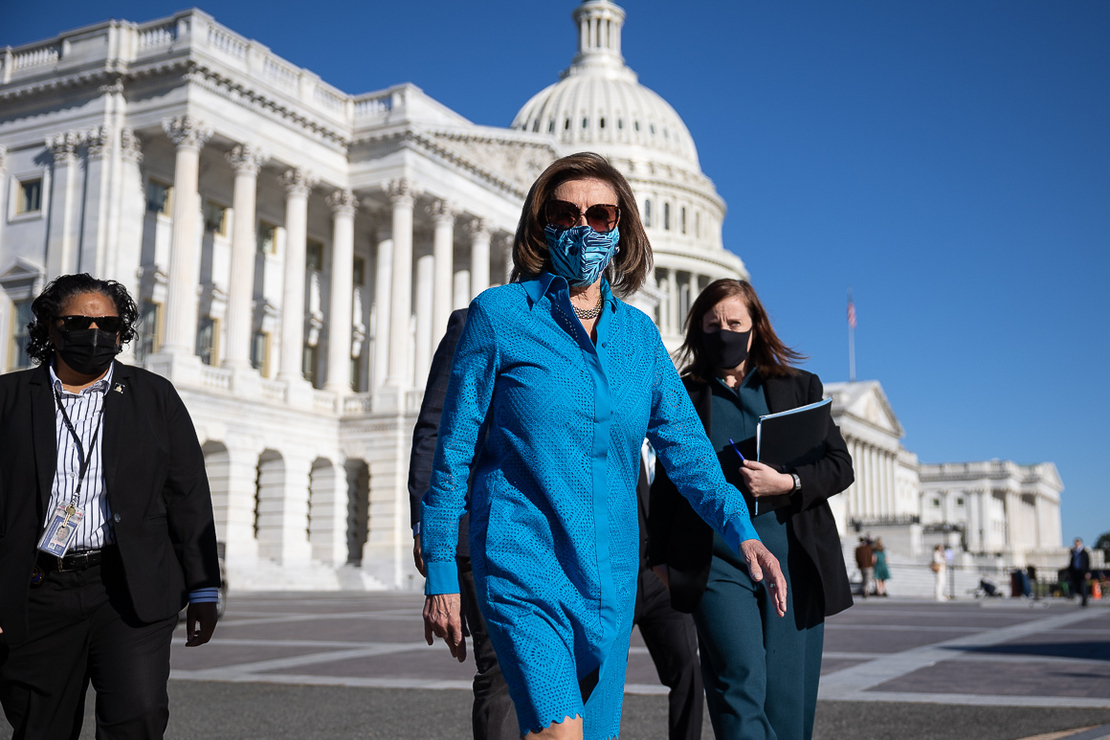 The California Democrat’s announcement could end the intraparty standoff over the fate of a separate, $1 trillion infrastructure bill on Monday, Sept. 27. Moderates say that measure needs to be voted on by that date, but progressives said they’d tank it if they don’t have a reconciliation bill to vote on with it.

But it’s still not clear what, exactly, the House will be voting on next week, as negotiations with the Senate continue over key policy provisions as well as the current, $3.5 trillion top line (E&E Daily, Sept. 24).

The House Budget Committee will meet in a rare weekend session tomorrow to advance a 2,465-page bill, a combination of all the draft bills passed earlier this month by several committees with jurisdiction over different components of the reconciliation process.

That could be what reaches the House floor, even though the price tag and many of the provisions won’t be able to withstand scrutiny in the Senate. Democratic leaders, however, are holding out hope for a bicameral deal on outstanding disagreements in time to avoid a legislative pingpong scenario.

“As negotiations continue, there may be changes,” Pelosi warned in a letter to Democratic colleagues this morning.

“Thanks to all Members for your proposals, which reflect the values of our Caucus to meet the needs of the American people in a time of intense dialogue,” she concluded. “That intensity continues as we move forward to pass two jobs bills next week.”

‘Where is the Senate?’

Progressives remain adamant that they will not vote for the infrastructure bill without a solid agreement with the Senate on reconciliation. Progressive Caucus Chair Pramila Jayapal (D-Wash.) said this morning that simply passing the $3.5 trillion House bill “doesn’t satisfy our requirements.”

“We’re all trying to get to a place where we have agreement between the House and the Senate and the White House,” Jayapal told reporters. “And then the Senate can pass a reconciliation bill.”

At the very least, Jayapal said she would need to see “public agreement” on reconciliation with all the details worked out. More than half of the nearly 100 members of the Progressive Caucus, Jayapal said, are committed to voting down the bipartisan bill absent a deal with Senate moderates — namely Sens. Joe Manchin (D-W.Va.) and Kyrsten Sinema (D-Ariz.).

“I don’t know how to trust again that the Senate is going to do what they say that they’re going to do, so certainly we need agreement,” Jayapal said.

Rep. Jared Huffman (D-Calif.), a progressive who chairs the Natural Resources Subcommittee on Water, Oceans and Wildlife, said he would need to see “some level of specificity and commitment from the Senate side that I just haven’t seen and I can’t really imagine in the next 72 hours.”

“This vote on the Senate infrastructure bill is final. That vote means it goes to the president’s desk and it becomes law,” Huffman said in an interview this morning. “I think we would be certifiably insane to cast that vote without rock solid certainty about what we’re getting in the ‘Build Back Better Act.’”

Negotiations with the Senate could indeed stretch well past Monday. After emerging from a meeting this morning with Pelosi and House committee chairs, House Majority Leader Steny Hoyer (D-Md.) said reconciliation would be a “possibility” on the floor next week.

Rep. Stephanie Murphy (D-Fla.), a moderate who leads the Blue Dog Coalition, said she also wants to see a reconciliation bill preconferenced with the Senate before voting on the final product, though she has decidedly different policy concerns. Getting that done by next week, she said, “would take an awful lot of work.”

“I think that there are ways in which we can make it more targeted and fiscally responsible,” Murphy told reporters this morning.

Jayapal, meanwhile, said moderate Senate Democrats are interested in meeting with progressives on a reconciliation deal.

“I think we’re very close. I think we are clear on what we’re asking for and what we put forward — the House of Representatives,” Jayapal said. “The question is, where is the Senate?”

President Biden, who ramped up his engagement with lawmakers this week to help broker a deal, acknowledged the standoff within the Democratic Party this morning.

“We’re at this stalemate at the moment,” he said in remarks at the White House. “And we’re going to have to get these two pieces of legislation passed — both need to be passed, and they’ll have a profound impact.”

He said that Wednesday’s Oval Office meetings with progressives and moderates “went really well,” while ceding the continued divide over pay-fors between the ideological factions.

That fact is “beginning to sink through the ether a little bit here on the part of people,” he continued. “I think there clearly is enough from a panoply of options to pay for whatever it is that folks decide to pay for.”

He likened the current negotiations over reconciliation to the months of talks with a bipartisan group of senators that yielded the $1.2 trillion infrastructure package, which the House Democratic moderates are eager to pass.

“There were a lot of negotiations on this,” he said. “It wasn’t until people were forced to look at, ‘what are you for?’ Are you for taking care of that highway or bridge in your state or that region. Are you for doing something about environmental degradation? Are you for something that deals with allowing us to provide for monies to states so that they can in fact, deal with things like what happened in in states for the major utility lines.”

In those talks, Biden said he found participants “going, ‘Hmm, I never really thought that through before. I think it makes sense.’ And that’s how we finally got to a bipartisan deal on what is a serious infrastructure proposal.”