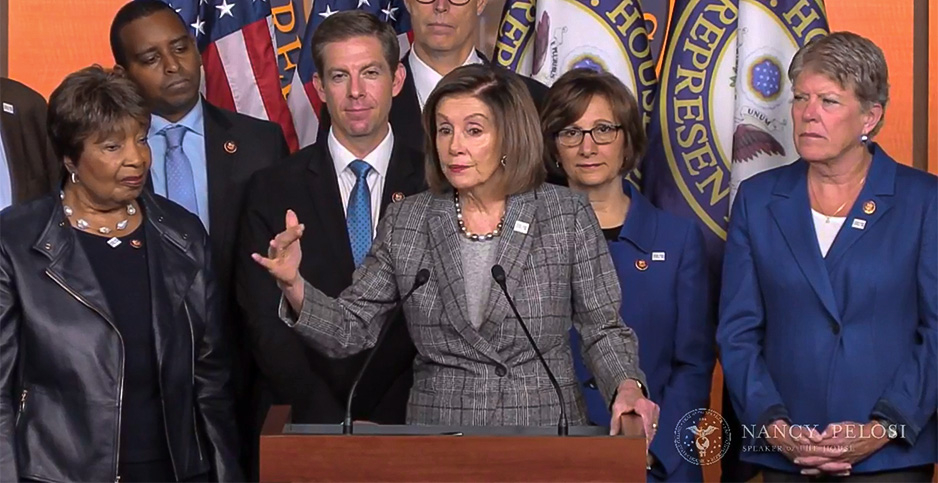 The House is poised to take up major climate change legislation before next year’s elections, once the Select Committee on the Climate Crisis submits its policy recommendations, House Speaker Nancy Pelosi (D-Calif.) told reporters this morning.

"That is the purpose of the Select Committee, not just to be an academic endeavor, but to report to the legislative committees so that we can act upon it and build along the way, in the public, the fact that Congress is acting," Pelosi said at a news conference to tout the Democrats’ trip to Madrid for United Nations climate talks.

Pelosi tapped the select panel, led by Rep. Kathy Castor (D-Fla.), at the beginning of the 116th Congress to draw up a set of climate policy recommendations by March of next year. While that panel has no legislative authority, Pelosi said its ideas would be funneled through the committees of jurisdiction.

It’s been an open question for months whether Democrats would hold a vote on broad decarbonization legislation, given the potential political risks and that Republicans still control the Senate.

They did pass a bill to keep the United States in the Paris Agreement through the House earlier this year, but that was widely seen as a symbolic measure with no chance of getting through Senate Majority Leader Mitch McConnell (R-Ky.).

Lawmakers have also gone down divergent paths, with Energy and Commerce leaders drafting their own bill to decarbonize the U.S. economy by 2050 on top of the select committee report.

Pelosi offered no specifics this morning about what potential broad legislation would look like or how House leaders would reconcile work in various committees.

But committee leaders said this morning they want to get moving. Energy and Commerce Chairman Frank Pallone (D-N.J.) told reporters he "absolutely" wants to move climate change legislation through his panel next year.

Pallone suggested he would move on his own track, likely taking up the bill his committee is drafting, slated for release in coming weeks. But he said getting a major bill to the floor would be a collective effort.

"We’re all working together here," Pallone said, noting that his committee has already voted out bills on energy efficiency and a pipeline reauthorization measure that includes climate provisions.

The political environment, he said, has changed "almost 100%" since the last time House Democrats moved a major climate bill 10 years ago, when the failed Waxman-Markey cap-and-trade legislation was blamed in part for Democratic losses in the 2010 midterms.

This time around, Grijalva predicted Republicans would pay the price for ignoring climate change.

"I think we need to pass strong legislation, and then, in the heat of election time, let them defend their decision and deal with the consequences of that decision," Grijalva told reporters. "Otherwise, nothing will get done."

Still, while "the political panic is not there," Grijalva said, Democrats have plenty of debates to iron out about climate policy.

"We do have serious discussions to have about timelines," Grijalva said. "Is it 2050, is it 2040, is it 2030? Financing how the transition is going to be paid for — those are obviously going to be issues, but I think those are all workable, and they’re not as divided as they were the last time."

‘Act upon the science’

Democrats said their delegation was welcomed with open arms by the international community in Madrid as a sign that the United States will still engage in the Paris Agreement, despite President Trump’s decision to withdraw.

And they suggested this year’s U.N. climate talks, known as COP25, could give them even more imperative to act.

"Our colleagues know that when we came back, one of the questions we had is, what is Congress going to do now?" Pelosi said. "Well, Congress is going to act upon the science in a legislative way with everyone at the table."

The Republican Senate remains a hurdle to any action on climate change. McConnell yesterday called Pelosi’s trip "performance art for the coastal elites."

Democrats nonetheless said they want their climate push to be bipartisan, even if there appears to be little public interest among Republicans in advancing broad greenhouse gas legislation.

Pelosi even invited the entire GOP side of the select committee on the Madrid trip, though none came.

The speaker said she’s looking to "shape something that is unifying on this subject."

Castor said, "If you’ve been following the work of the select committee, you will have seen that there are many areas of bipartisan interest to act on," citing agriculture and reducing methane emissions as examples.

But ultimately, Grijalva and Pallone said Democrats will move forward whether or not Republicans are involved.

Pallone noted that the GOP has supported many of the energy efficiency and innovation bills that have come out of his committee, but there’s also a messaging hurdle.

"It’s nuanced," Pallone said. "You try to get Republican support when you can, but as soon as the president labels it climate action, then they become reticent."

"We just hope that the president will change his mind," she said.