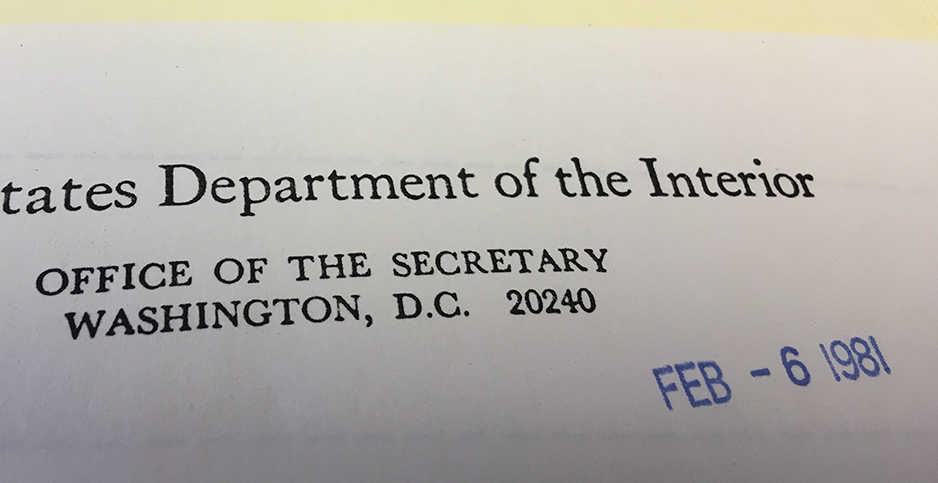 A trove of documents acting BLM chief William Perry Pendley donated to the University of Wyoming illuminate his time in the Reagan administration. Jennifer Yachnin/E&E News

LARAMIE, Wyo. — Ever since Interior Secretary David Bernhardt’s decision last month to name self-proclaimed sagebrush rebel William Perry Pendley as the temporary leader of the Bureau of Land Management, the Trump administration has been fighting allegations that it is open to selling off the nation’s public lands.

But nearly four decades ago — during his first year as a top official under Reagan administration Interior Secretary James Watt — Pendley’s own notes show he would propose doing just that.

"Sell all BLM lands E. of Miss.," Pendley wrote in a 1981 note archived at the University of Wyoming’s American Heritage Center.

In addition to the potential sell-off of lands managed by BLM across the 31 states east of the Mississippi River, Perry’s notes include a proposal that the Reagan administration would eventually adopt.

The next line in Pendley’s notes reads: "all Dpt agencies id 5% suitable not nec. for sale."

"Westerners — residents of the land all year around — understand the value and importance of the land and the various purposes that it can and must serve. Surrounded by Federal ownership communities must be permitted a flexibility in relating to the land," Pendley wrote. "The ire raised by the increasing unavailability of Federal land to multiple use was evidenced by buttons reading, ‘U.S. Property: Keep Out.’"

He added that Interior "is now revising the opinions and manuels [sic] which permitted the effective withdrawal of millions of acres of Federal land in Westerners’ backyards."

Pendley’s views on public land ownership and management are well-known — after his exit from the Reagan administration in early 1984, he went on to helm the Mountain States Legal Foundation and authored multiple books including "Sagebrush Rebel: Reagan’s Battle with Environmental Extremists and Why It Matters Today."

"I understand and know how to follow orders. I get it," Pendley said. "Whatever I’ve done or said in the past is irrelevant."

"One of the worst things about going to work for the Administration is to be referred to as a ‘bureaucrat’; but since I’m working for Jim Watt, I wear that badge with some honor and distinction," Pendley said in a 1981 speech included in the archived documents.

The Laramie, Wyo., institution is home to 30 boxes of correspondence, notes, government briefings and other documents from Pendley’s tenure as deputy assistant secretary for energy and minerals.

In another 1981 document detailing the assistant secretary’s objectives, Pendley suggested the creation of a "public awareness program regarding lands and resources."

An April 1981 letter to the leadership of the U.S. Geological Survey, Bureau of Mines, and Office of Minerals Policy and Research Analysis asked for those agencies to support Watt’s proposed national minerals policy.

"A critical element of that policy is a reordering of the Department of Interior’s approach to the public lands and their availability for exploration and development," Pendley wrote.

"The API proposal has merit given unacceptable Government delays in the past," Pendley wrote, disputing Frederick’s assertion that the changes were not necessary.

‘Massive attention in the media’

But the archived documents also show Pendley paying attention to public perception of his office, as well as that of Watt’s.

The poll also included approval-disapproval ratings for political leaders, like Reagan and then-House Speaker Tip O’Neill (D-Mass.), as well as Watt. The poll showed 80% of those asked did not recognize the Interior secretary.