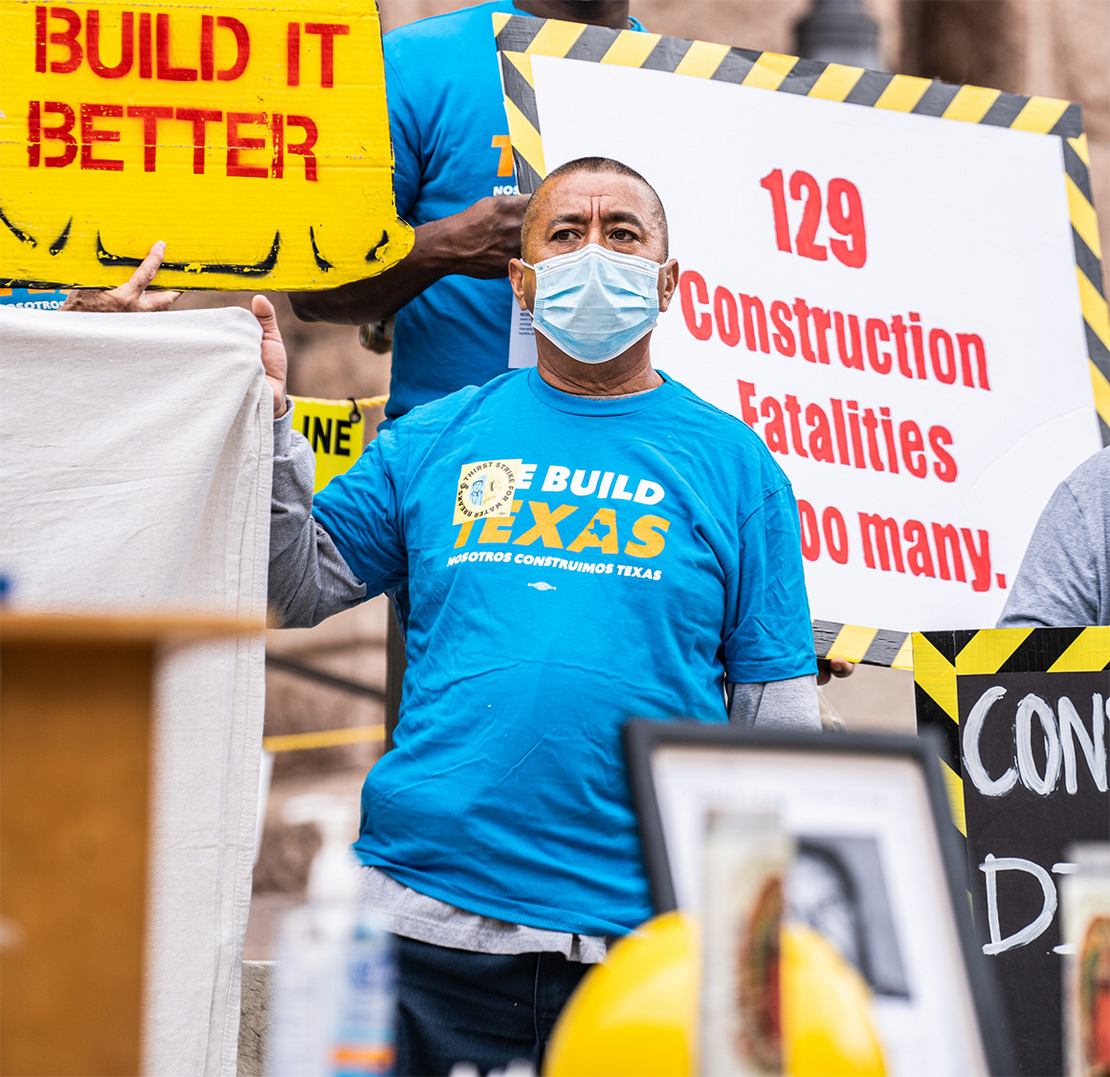 A Republican push meant to prevent Texas municipalities from protecting workers from the coronavirus pandemic also threatens to eliminate bare-bones requirements in two cities giving construction workers time to hydrate in the heat.

Dallas and Austin require employers to provide construction workers 10-minute water breaks every four hours. That’s seen by many as minimal protections in a state where summer heat routinely rises above 100 degrees Fahrenheit and where the number of dangerously hot days is expected to increase with climate change.

S.B. 14 would erase those requirements as Texas Republicans, angered by local ordinances requiring mandatory sick leave during the coronavirus pandemic, push to eliminate municipalities’ ability to protect workers from other hazards.

The bill is supported by Gov. Greg Abbott (R) and has already passed the Senate. Its fate now lies in the hands of House Democrats who fled the state this spring to prevent passage of a bill that would limit voting rights in Texas.

Fidel Guzman, a plumber in Austin, spends much of his time at work digging irrigation ditches in 100 F heat. With diabetes and high blood pressure, he fears that the bill could stop him from drinking enough water or even prevent him from taking his medication.

“I am feeling myself that it is getting hotter, so imagine what these laws will do,” Guzman said in Spanish through a translator. “This law is inhumane. People will faint, people can die.”

Laborers are especially vulnerable to heat’s health effects because the physical nature of their work makes it difficult for their bodies to cool down. Going too long without water, rest and ways to cool off can result in dehydration, heat exhaustion or heatstroke, which can be deadly. Heat can also exacerbate other chronic heart and respiratory illnesses or cause kidney disease.

Warming from climate change is expected to make things worse. A new study out today from the Union of Concerned Scientists took a county-by-county look at the impact heat has on outdoor workers.

It found that in Travis County, where Austin is located, extreme heat was present on six workdays per year historically. If heat-trapping emissions don’t decline, the number of work days at risk from extreme heat would rise to 31 by midcentury, according to the study. There’s also an economic risk: More than $386.9 million in wages for outdoor workers is on the line.

Hydration is a key means of combating heat exhaustion. But although federal law requires employers to provide workers with water, it does not guarantee them time to drink it.

Those grim statistics, along with high-profile construction worker deaths, are why Austin and Dallas decided to mandate water breaks in 2010 and 2015, respectively.

A 10-minute break after four hours of work in punishing heat may not seem like a lot, but Emily Timm, who co-directs the Worker Defense Project, which advocated for the ordinances, said it’s what was “politically feasible at the time.”

“Of course, workers in many situations will need more water more frequently, but this provides them with the grounds to say, ‘I have a right to a break’ when employers are just pressuring them to get the job done on time,” she said.

Now those rights could disappear.

S.B. 14 has been a priority for Abbott, who put it on the agenda for this month’s special session of the Legislature after action on the bill stalled when Democratic state lawmakers left the Capitol to prevent changes to voting laws this spring.

With the delta variant of the coronavirus surging across the Lone Star State, the bill has been seen as a referendum on protections like paid sick leave some municipalities instituted at the start of the pandemic. Senate passage of the bill last week came as Abbott signed executive orders restricting masks or vaccine mandates.

In an emotional appeal about the bill Friday, Dallas County Judge Clay Jenkins noted that there were no pediatric intensive care unit beds available in the county. “We don’t have one," he said. "Your child will wait for another child to die.”

“There is no room for someone who is in an accident on a construction site or who has been dehydrated; there is no room for anyone,” he said. “S.B. 14 threatens all those basic protections meant to keep people alive and safe at work.”

He said he doesn’t believe the water break ordinances are necessary to protect construction workers.

“I disagree with the false pretense that, absent this type of mandate, construction workers would be put into an unsafe situation by not being able to hydrate,” he said.

Ned Muñoz, a vice president with the Texas Association of Builders, agreed by saying that “on our job sites, people are getting water when they want, as much as they want.”

He also argued that the federal Occupational Safety and Health Administration is equipped to ensure workers have water, even though the agency has resisted writing heat-related standards requiring water breaks for workers over the past four decades (Greenwire, Aug. 6).

Years ago, before the city had its water ordinance, his boss punished him for asking for a break while feeling dizzy as he framed houses. The employer made him buy water for the entire work crew.

“We were really on our own. It is scary to think about all of the workers who will die if this bill passes, and it’s only getting hotter,” he said in Spanish through a translator.

Austin’s ordinance, he said, made him feel empowered to speak up when he saw workplace abuses. Now he helps organize protests of the bill with the Worker Defense Project.

“It is better to fight than to die,” Pedro said.