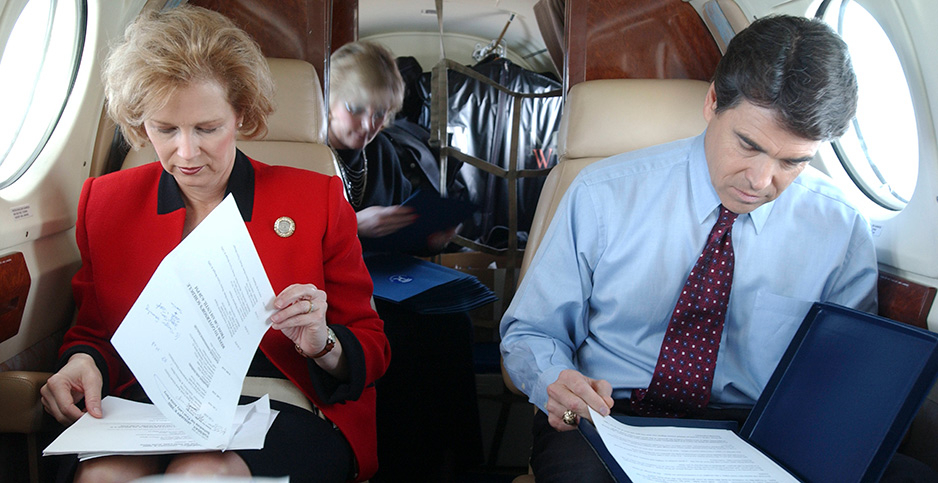 Energy Secretary Rick Perry and his wife, Anita, fly to a campaign event via private airplane in this 2002 file photo. Bob Daemmrich/Polaris/Newscom

DOE’s premium travel report for fiscal 2018, obtained under the Freedom of Information Act, shows that coach fares were available for flights taken by the secretary, but that premium or first-class seating was approved for security reasons.

All of Perry’s flights listed in the report are labeled "mission" or "operational," meaning they were made to particular sites to conduct operational or managerial activities. As head of DOE, Perry is also a member of the National Security Council.

The most expensive first-class flights included a Washington, D.C.-to-London trip in February 2018 that was $17,763, and a flight to Cape Town, South Africa, in November 2017 that was $15,709. A trip to Riyadh, Saudi Arabia, in November 2017 cost $12,710. In December 2017, Perry signed a memorandum of understanding with Saudi officials to cooperate on fossil fuels and "carbon management."

As DOE chief, Perry also has traveled to China, Africa, Japan and Qatar and made a number of trips to laboratories and DOE facilities across the country. In fiscal 2018, Deputy Secretary Dan Brouillette also took first-class flights that added more than $12,000 in costs compared with coach tickets, according to the documents.

DOE has said it follows all travel regulations. Federal rules allow first-class or business-class tickets to be purchased in "exceptional security circumstances" or for trips longer than 14 hours, and individual agencies determine what constitutes such circumstances.

"The Department follows all federal travel rules and regulations without exception," said Shaylyn Hynes, a spokeswoman for the agency. "Secretarial travel in premium class is standard operating procedure at DOE and has been for years."

DOE’s inspector general last year found no "inappropriate" use of government aircraft and said all flights Perry and DOE staff took in 2017 — about $90,000 worth — were approved by the Office of the General Counsel (Greenwire, May 25). But the agency watchdog also found DOE should take additional steps to prevent "abuse" in the future.

Past DOE chiefs have also opted for premium travel. Then-Energy Secretary Ernest Moniz, for example, took first-class flights during the last few months of the Obama administration. According to fiscal 2017 travel logs obtained under FOIA, Moniz spent more than $10,000 on first-class trips.

The Trump administration has faced a host of questions about travel in the past by Cabinet-level officials. In 2017, Tom Price resigned as secretary of Health and Human Services, in part because of concerns regarding his travel practices.

The travel report also shows DOE spent more than $15,000 for a flight for Perry’s wife, Anita, to travel to Cape Town on Oct. 19, 2017, but the agency said it was reimbursed for the cost of those flights. Anita Perry accompanied her husband as an agency "asset" to South Africa and Italy, a move that raised questions about her qualifications.