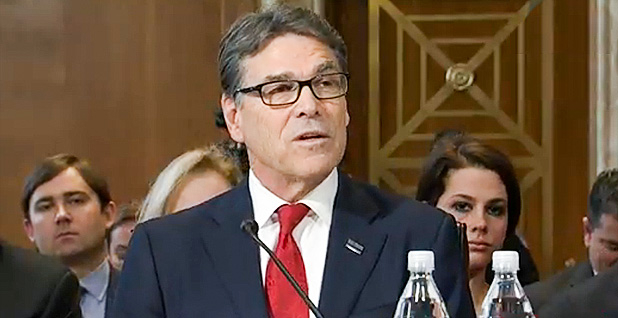 Former Texas Gov. Rick Perry (R) made a bid for the support of Senate Democrats today by promising to defend the Department of Energy’s climate-related science and innovation even if his boss, President-elect Donald Trump, wants to gut the department he’s been picked to lead.

And he repeatedly vowed to defend DOE scientists and research, including their climate change work, calling the national labs a "crown jewel."

But when senators pushed him on potential Trump budget cuts, Perry quickly pivoted to his famous 2011 blunder in a nationally televised Republican presidential primary debate when he forgot the name of the federal agency he wanted to dismantle, DOE.

"Well, senator," Perry told Democratic Sen. Mazie Hirono of Hawaii, "maybe [the Trump administration will] have the same experience I had and forget they said that."

In prepared comments, Perry expressed regret for calling for DOE’s extermination and stated his belief in climate change, saying humans are at least partially to blame.

Sen. Maria Cantwell of Washington, the committee’s top Democrat, told Perry there is "widespread anxiety" about whether Trump intends to dismantle DOE’s scientific capabilities or simply starve departmental resources, saying the incoming administration can either "cling to the fossil fuel industry of the past or continue to lead on innovation."

Cantwell pushed Perry on whether he would protect DOE scientists and the science budget related to climate, to which Perry replied, "I am going to protect the men and women of the scientific community from anyone that would attack them, no matter what their reason may be, at the Department of Energy."

When asked about a contentious questionnaire Trump advisers circulated, asking for top-paid lab workers and names of staffers who attended climate-related meetings, Perry said that wasn’t his call.

It wasn’t long before Perry, a former "Dancing with the Stars" contestant and repeated presidential hopeful, again turned to levity.

In an exchange with Democratic Sen. Al Franken of Minnesota, Perry said he enjoyed meeting Franken in his Senate office.

Perry: "I hope you’re as much fun on that dais as you were on your couch."

A source close to the transition team said DOE budget cuts and the elimination of some offices have been "bubbling about" for some time, namely proposals from advisers on Trump’s landing team with ties to the Heritage Foundation.

Even so, Republican Sen. John Hoeven of North Dakota said during an interview today that he and Perry discussed the importance of fossil energy research at length when they met privately earlier this month. Perry is "very committed" to the department’s fossil research work, Hoeven said.

Sen. Angus King (I-Maine) said the cuts being reported would be "devastating," noting Perry’s stated support for the agency’s oversight of research on gas production, renewables, offshore energy and supercomputing.

"I hope the people proposing these cuts are watching this hearing," King said. "This is absolutely nuts in terms of the future of energy in this country."

Perry, King said, is going to have to do some "hard pushing back" should the Trump administration take the scalpel to DOE.

Perry’s own past comments calling for downsizing and eliminating the department repeatedly came up.

"Square this for me. … You’re coming into a new position where we’re talking about massive cuts," Sen. Debbie Stabenow (D-Mich.) said. "You’ve advised and supported cuts … that are critical to lowering emissions [and bolstering efficiency]."

Energy and Natural Resources Chairwoman Lisa Murkowski (R-Alaska) said one of the largest challenges facing the new DOE chief is management of thousands of employees and contractors.

"I do not subscribe to the view that only a scientist can manage other scientists," Murkowski said. "I think what we need is a good manager, we need a manager to manage all the scientists."

The senator was also quick to note her eagerness for the next DOE leader to expedite natural gas exports and lower energy prices in rural Alaska.

Throughout the hearing, Perry touted his experience in Texas with both energy and budgets.

"I have the executive experience necessary," he said, "for leading an organization as large as the Department of Energy."

He added, "This is not my first rodeo when it comes to budget shortfalls."