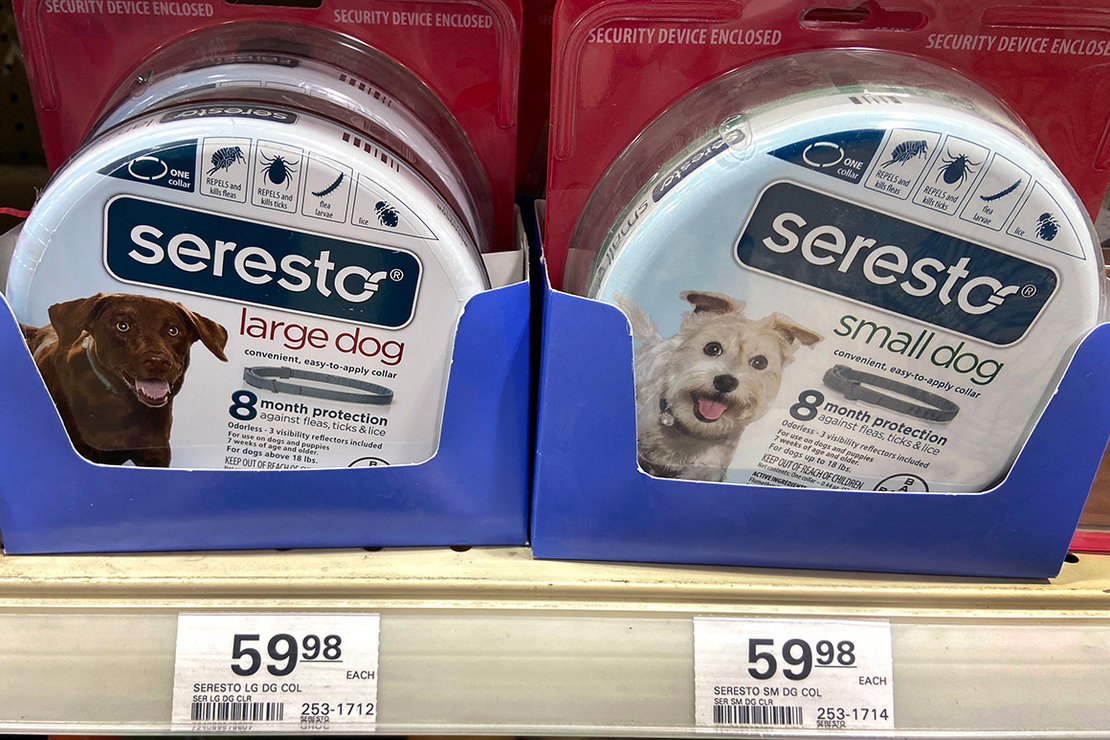 Seresto pet collars are offered for sale last year at a retail store on in Chicago. According to EPA documents, the flea and tick collars have been linked to hundreds of pet deaths and tens of thousands of pet injuries. Scott Olson/Getty Images

EPA’s response to concerns over pesticide-laced pet collars is now under watchdog scrutiny following more than a year of controversy.

The agency’s Office of Inspector General announced yesterday that it will review EPA’s handling of widespread reports around Seresto collars meant to ward off fleas and ticks. OIG will assess whether the agency responded appropriately when carrying out its duties under the Federal Insecticide, Fungicide and Rodenticide Act, which regulates pesticides.

“Our objectives are to determine whether … the EPA’s response to reported pesticide incidents involving Seresto pet collars provides assurance that the collars can still be used without posing unreasonable adverse effects to human health and the environment,” OIG wrote, along with stating it would probe if “the EPA adhered to pesticide registration requirements in its approval of Seresto pet collars, specifically toxicological data requirements.”

The letter was sent to Michal Freedhoff, who leads EPA’s chemicals office. EPA did not respond to a request for comment.

OIG’s review marks another turn in an increasingly contentious saga over Seresto’s products, which are produced by Elanco Animal Health Inc. and were previously made by Bayer U.S. LLC. In March of last year, EPA documents disclosed through public records requests linked Seresto collars to nearly 1,700 animal deaths and more than 75,000 incidents of animal harm, in addition to nearly 1,000 reports of human health impacts.

At the time, Elanco dismissed questions aimed at the company and argued the raw data was being misinterpreted. EPA meanwhile encouraged consumers to “read and follow” pesticide labels and said it would discuss issues with the company.

Advocacy groups, however, argued the data spoke to deeper issues around pesticides policy. Seresto uses two pesticides, imidacloprid and flumethrin, but research has not focused on what their combined effects might be. The Center for Biological Diversity sought more documents relating to the matter and sued EPA in April of last year for failing to turn over those communications (Greenwire, April 14, 2021).

When the records were finally released, the results were eye-opening. Furious emails from EPA career scientists revealed significant internal pushback over the agency’s handling of safety concerns. Some staffers argued the collars should not be used on endangered species, and others indicated they had been instructed not to discuss the issue over communications that could be subject to public records requests (Greenwire, March 25).

Asked to comment about the emails in March, EPA said it had “concluded that no direction was given to staff to not express their opinion in email to avoid public disclosure” and that the agency was still looking into issues around Seresto.

The OIG probe will likely apply more pressure to the agency over the issue. CBD petitioned EPA last year to cancel Seresto’s registration, leading to a public comment period that ended in September. The agency is still reviewing feedback as it evaluates next steps.

As of last month, there have been more than 98,000 complaints about Seresto’s impacts on pets submitted to EPA. Some 2,500 of those specifically pertain to deaths.

In a statement, CBD welcomed the news of OIG’s probe. Nathan Donley, CBD’s environmental health science director, called the ongoing problems with the pet collars “a sad reminder of the industry’s outsized influence over the agency” at the expense of animals and people.

“I hope this investigation forces the EPA’s pesticide office to finally act on these reports and prioritize health and safety,” Donley said.