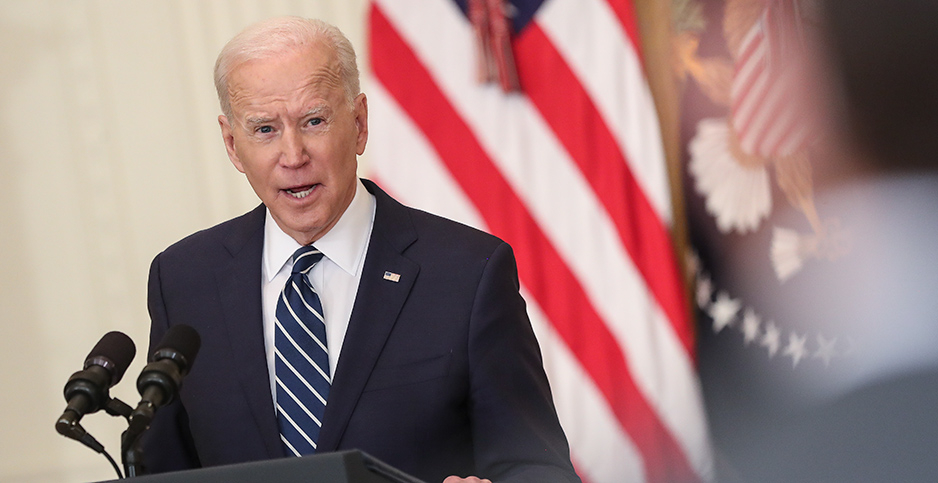 President Biden responds to a reporter at his first press conference yesterday. Oliver Contreras/Pool via CNP/SplashNews/Newscom

President Biden plans to start his infrastructure push next week in Pittsburgh. But in Washington, the jockeying is already underway.

Yesterday, administration officials, lawmakers, industry groups and environmentalists openly positioned themselves for a massive battle over the future of American transportation, energy and manufacturing.

The sprawling field of actors and interests demonstrated the complexity awaiting Democrats as they decide how to pursue decarbonization and who will shoulder its costs.

Transportation Secretary Pete Buttigieg outlined the administration’s broad priorities to House lawmakers, with a heavy emphasis on electric vehicles and climate-resilient infrastructure. But he offered few answers on funding.

The American Petroleum Institute announced its support for carbon pricing — to the outrage of some Republicans — but it wouldn’t say what that price should be or whether the sector could align with Biden’s goal of net-zero U.S. emissions by 2050.

The Interior Department held a forum where industry, tribal leaders, conservationists and others debated the future of oil and gas on public lands — a matter that could affect U.S. emissions directly and U.S. infrastructure indirectly, as some states use federal royalty payments to fund projects.

On the Senate floor, Majority Leader Chuck Schumer (D-N.Y.) committed to advancing an array of climate and infrastructure measures — including, in the short term, restoration of a methane rule that the Trump administration rolled back.

National climate adviser Gina McCarthy, fresh from meeting with the oil and gas sector earlier this week, huddled with the U.S. Chamber of Commerce, a historical foe of climate action that is trying to moderate its stance.

And in the first press conference of his presidency, Biden himself raised the matter of climate and infrastructure after White House reporters failed to ask him about it.

"The roads that used to be above the water level — didn’t have to worry about where the drainage ditch was — now, you got to rebuild them 3 feet higher, because it’s not going to go back to what it was before; it will only get worse, unless we stop it."

The president pointed to mining and oil well reclamation as another climate priority that could advance through an infrastructure bill.

"We have over 100,000 wellheads that are not capped, leaking methane," Biden said.

"What are we doing? And, by the way, we can put as many pipefitters and miners to work capping those wells at the same price that they would charge to dig those wells."

Biden’s talk of transitioning fossil fuel workers to different jobs was a rare indication by the president that he anticipates the fossil fuel industry to hit the skids.

Since Biden canceled the Keystone XL pipeline on his first day in office, drawing the ire of Republicans and unions, Democrats from the White House to Capitol Hill have avoided directly attacking fossil fuels, choosing instead to hype the opportunities an infrastructure bill would hold for clean energy.

That pattern held true yesterday as two of Biden’s Cabinet secretaries sketched out the administration’s visions for the future.

Buttigieg said electric vehicle incentives, mass transit and decarbonizing heavy-duty vehicles are all top priorities. He said declining revenues from the gas tax would need to be replaced somehow. And he sounded receptive to starting a new trust fund for rail infrastructure, as exists for highways and airports (see related story).

Rep. Garret Graves of Louisiana, the top Republican on the House Select Committee on the Climate Crisis, asked Buttigieg whether it’s appropriate for the feds to prop up EVs at the expense of gas-burning cars.

"Why is it that the department would choose a technology, as opposed to letting innovators innovate? As you know, charging stations would largely relegate our future cars to only electric technology. And at the same time, the generation of that electricity may be dirty, which may not actually advance our lower emission goals," Graves said.

Buttigieg responded that cleaning up the electricity grid and the transportation system go together and that these markets have always had a role for the government.

"In the same way that I think many in Congress believe — or at least historically have believed — that the U.S. ought to have a policy when it comes to access to fossil fuel energy and engagement and what’s going on with oil and gas, that similarly, the U.S. has a policy interest in the adoption of electric vehicles," he said.

She spoke of aligning fossil fuel extraction with other priorities, like conservation — but she emphasized that the sector has a future under Biden.

Her message echoed API’s yesterday when the trade group announced its support for the principle of carbon pricing: The industry might have to adapt, but oil and gas are sticking around.

The Paris climate agreement calls for holding warming to 1.5 degrees Celsius, a feat that will require halving global emissions by about 2030, scientists say.

API President Mike Sommers said the trade group supports the Paris Agreement’s "ambitions," but he declined to say if the industry could meet its benchmarks.

"The [world’s] energy needs are only going to increase," he said. "The challenge is, how do you meet those growing demands for energy while at the same time addressing the need to ensure that emissions go down?"

"So we’re focused on that dual challenge, and we know that we’re going to play a role for the energy mix going forward," he added.

Carbon pricing has emerged as a potential way for Democrats to fund infrastructure spending while driving further emissions reductions, though some progressives favor other approaches.

API said it supports a carbon price coupled with research funding and cutting regulatory "duplication," along with voluntary commitments from oil and gas firms, like an end to flaring (Greenwire, March 25).

Sommers said that approach amounts to a "middle ground" between the two parties’ ideological wings calling for either government regulations or no action.

"America has made significant progress in reducing emissions to generational lows, but there’s more work to do, and there’s nobody better equipped to drive further progress than our industry," he said.