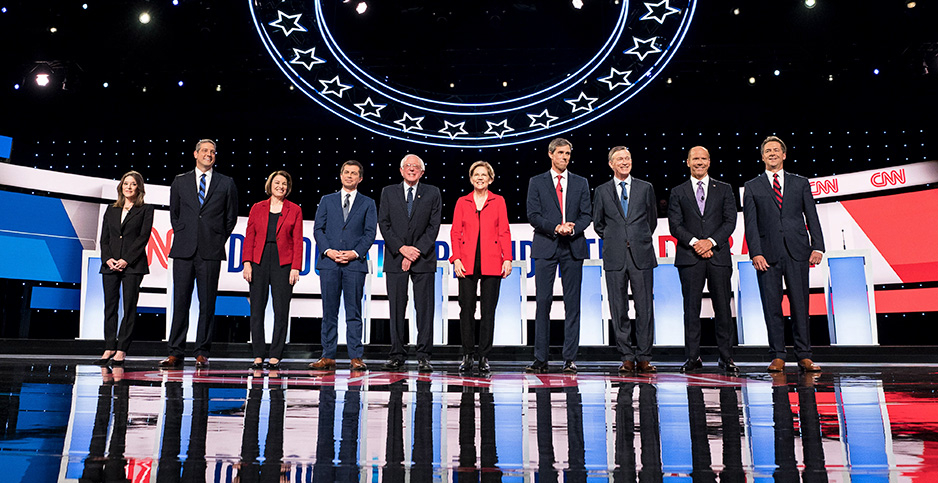 Progressive and moderate Democratic candidates for president battled yesterday over the ambition and aggressiveness of plans to take on climate change, providing contrasts between their camps.

In showdowns set up by the CNN moderators during the first part of the second set of debates in the 2020 primary, candidates including Massachusetts Sen. Elizabeth Warren and Vermont Sen. Bernie Sanders argued that their ambitious platforms are more in line with the urgency of climate change than the policies that candidates such as former Colorado Gov. John Hickenlooper and former Maryland Rep. John Delaney framed as more politically viable.

"I get a little bit tired of Democrats afraid of big ideas," Sanders, a progressive who favors the Green New Deal, remarked after Ohio Rep. Tim Ryan outlined how his manufacturing agenda would make the United States a worldwide leader in technologies like electric vehicles and solar panels.

"Republicans are not afraid of big ideas. They could give $1 trillion of tax breaks to billionaires and profitable corporations; they could bail out the crooks on Wall Street," Sanders said. "So please don’t tell me that we cannot take on the fossil fuel industry, and nothing happens unless we do that."

Hickenlooper took multiple opportunities to dig at the Green New Deal and other progressive ideas.

"I think the guarantee of a public job for everyone who wants one is a classic part of the problem. It’s a distraction," he said.

Warren plugged her plans to spend trillions of dollars fighting climate change, including efforts to increase U.S. production of clean energy technology and export it worldwide.

But she also criticized the framing of progressive climate proposals, which she said are based on "Republican talking points" about "made-up" policies.

"That’s the problem we have in Washington right now. It continues to be a Washington that works great for oil companies, just not for people worried about climate change," Warren said.

Montana Gov. Steve Bullock, on the other hand, argued that many of his rivals are getting ahead of their skis. He brought the issue back to money in politics, his favorite subject in the campaign.

"No one on this stage is talking about the fact that the Republicans won’t even acknowledge climate change is real," he said, "and that’s because of the corrupting influence of money. That has been my career."

Bullock said, in part, his rivals were forgetting about workers who would be left behind in a transition away from fossil fuels.

"You’ve got to recognize that there are folks who have spent their entire life powering our country. Far too often, Democrats sound like they’re part of the problem," he said. "We’ve got to aid in those transitions as we get to a carbon-neutral world."

But Sanders fought back against the accusation. "Nobody in Congress is more strongly pro-worker than I am," he said. "So when I talk about taking on the fossil fuel industry, what I am also talking about is a just transition."

The event featured 10 randomly drawn candidates from the pool of 20 who met the Democratic National Committee’s standards for the second debate round. The other 10, including former Vice President Joe Biden, California Sen. Kamala Harris and Washington Gov. Jay Inslee, will debate tonight.

The CNN moderators spent just over 10 minutes on climate change-related questions, more than the seven and eight minutes that the NBC News moderators spent on the topic last month during the first set of debates, but still a small portion of the 2-hour, 30-minute event.

Citing the Michigan location of the debate, moderator and CNN host Dana Bash did briefly ask about the Flint water crisis, and specifically what candidates would do to stop future lead crises in drinking water.

But author and activist Marianne Williamson took the question as an opportunity to talk about racial inequity.

"Flint is just the tip of the iceberg," she said. "I was recently in Denmark, South Carolina, where there is a lot of talk about it being the next Flint. We have an administration that has gutted the Clean Water Act. We have communities, particularly communities of color and disadvantaged communities all over this country, who are suffering from environmental injustice.

Williamson said the Flint crisis is part of the "dark underbelly of American society" and said Trump has brought about a "dark psychic force of … collectivized hatred."