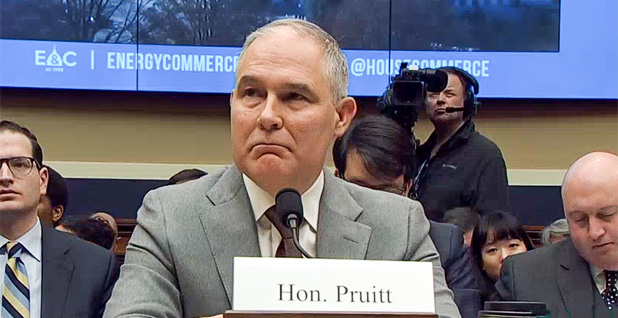 Appearing before the House Energy and Commerce Subcommittee on Environment, Pruitt talked up his plan to combat lead poisoning and his wish to involve lawmakers and other federal agencies in the initiative.

"It is one of the greatest environmental threats, I think, we face as a country," Pruitt said at the hearing, noting that service lines can have lead seeping into the water supply.

Lead is a toxic metal that can be particularly harmful to children, leading to learning disabilities and slower growth.

Pruitt said he aimed to work with the committee on a 10-year strategy "to eradicate these concerns." He said several program offices at EPA were already working on the plan. In addition, 17 agencies are addressing lead, according to the EPA chief.

"It is going to be a very ambitious initiative at our agency," Pruitt said. He added that he was sending a letter to his colleagues in other agencies to make it "a point of emphasis" heading into 2018.

Earlier in the hearing, the EPA chief said President Trump has talked about boosting infrastructure, which could result in replacing lead service lines. Corrosion controls and removing lead paint would also be needed.

"There’s a multifaceted approach we need to evaluate if we are to declare a ‘war on lead,’ if you will," Pruitt said.

Rep. Debbie Dingell (D-Mich.) thanked Pruitt for pushing to fight lead. She said she has met with families affected by the Flint, Mich., drinking water crisis, which she said should never happen again.

"I was very glad to hear you talk of this ‘war on lead’ that we need to have," Dingell said. "It is a concern all over the country."

The Michigan Democrat, however, took Pruitt to task for Trump’s fiscal 2018 budget plan that would end specific grants to help remove lead paint as well as a round of buyouts this summer that led to hundreds of employees leaving EPA.

Dingell also said the agency has delayed key regulations, like the rule to reduce lead and copper in drinking water.

Several Republicans were fulsome in their praise for the administrator for taking a lighter approach on regulations. Rep. Kevin Cramer (R-N.D.) thanked the EPA chief for traveling all over the country seeking to partner with state officials.

"Thank you for going to places like Oklahoma and North Dakota and other states in the middle of ‘Real America’ that are affected for what the last eight years has simply been a dictatorship by the EPA," Cramer said.

It was Pruitt’s first congressional hearing since appearing before House and Senate appropriations subcommittees this June.

Democrats took their chance to hammer him on some of his actions at EPA so far, including frequent travel home to Oklahoma as well as building a secure phone booth in his office (E&E News PM, Dec. 7).

Rep. Kathy Castor (D-Fla.) used her time to focus on Pruitt’s prior job as Oklahoma attorney general, during which he frequently sued EPA.

She pressed the administrator on whether he has sought to distance himself from his past political donors and allies in his legal battles against the agency — including Murray Energy Corp., Peabody Energy Corp. and Southern Co.

"How many of these groups have you met with during your 10-month tenure at EPA?" Castor asked.

After some crosstalk, Pruitt replied, "I don’t know."

Castor then asked Pruitt if he would recuse himself from cases involving his past co-litigants and political donors.

The EPA chief said he would follow the advice of career ethics staff, which had already led him to recuse from cases involving Oklahoma.