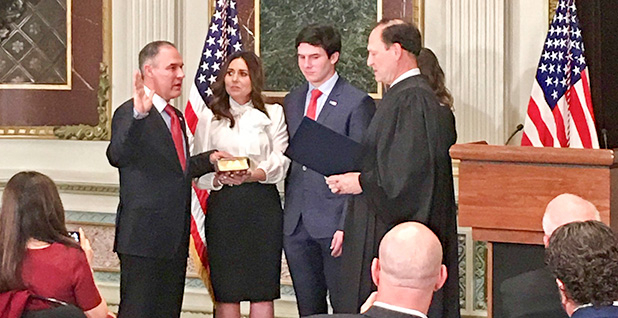 Pruitt, whom the Senate confirmed Friday on a mostly party-line vote of 52-46, already made waves in his first hours as EPA chief. In his first interview since his nomination in December, with Wall Street Journal columnist Kimberley Strassel, Pruitt said "it’s a fair question" whether EPA has the "tools" to restrict carbon dioxide emissions.

Pruitt said he expects to withdraw the Waters of the U.S. rule as well as the Clean Power Plan, which reduces power plants’ carbon emissions, soon. As Oklahoma attorney general, he was part of litigation against both those rules.

Asked whether EPA would regulate carbon dioxide, Pruitt said that is under question.

"There will be a rule-making process to withdraw those rules, and that will kick off a process," Pruitt said. "And part of that process is a very careful review of a fundamental question: Does EPA even possess the tools, under the Clean Air Act, to address this? It’s a fair question to ask if we do, or whether there in fact needs to be a congressional response to the climate issue."

Those sentiments seem to contrast with Pruitt’s testimony at his confirmation hearing last month.

"I believe the EPA has a very important role at regulating the emissions of CO2," Pruitt said during one exchange with Sen. Bernie Sanders (I-Vt.).

Pruitt also said he would respect EPA’s endangerment finding against carbon emissions, which was issued in 2009 and is the basis for the agency’s actions in combating climate change.

"The endangerment finding is there and needs to be enforced and respected," Pruitt told Sen. Ed Markey (D-Mass.) at the hearing. Pruitt also said he knew of nothing that could cause a review of that finding.

Environmentalists, who lobbied heavily against Pruitt’s confirmation, believe the new administrator will have EPA retreat from the climate change fight. John Walke, clean air director for the Natural Resources Defense Council, said, "Pruitt is a smart enough lawyer to understand the science-based endangerment finding is the trigger to turn on regulations for CO2."

Regarding the differences between Pruitt’s testimony and his Wall Street Journal interview, Walke said, "We call that a bait-and-switch."

In his interview, Pruitt said that as EPA chief, he would be committed to improving water infrastructure, citing the Flint, Mich., drinking water crisis and the Oroville Dam’s problems in California. He wanted EPA career employees to know the Trump administration is committed to the agency, saying, "This isn’t a disregard for the agency, it’s a restoration of its priorities."

Pruitt said EPA under the Obama administration was aggressive in taking authority away from state regulators, who he said have "an enormous role to play" in environmental protection.

The EPA chief repeated one theme from his confirmation hearing — that one can be pro-energy and pro-environment — and said he is not worried about several lawsuits that he will have to face from environmental groups.

In addition, Pruitt said he plans to overhaul EPA’s processes behind scientific studies and cost-benefit analyses.

"The citizens just don’t trust that EPA is honest with these numbers," Pruitt said. "Let’s get real, objective data, not just do modeling. Let’s vigorously publish and peer-review science. Let’s do honest cost-benefit work. We need to restore the trust."