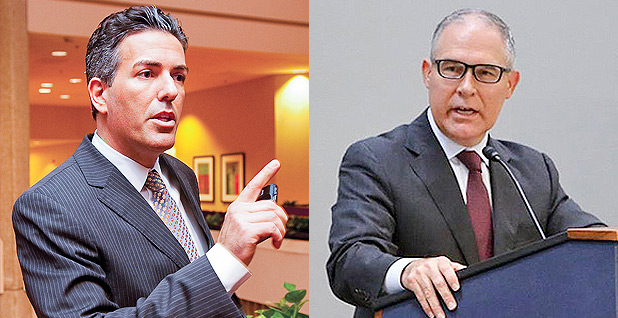 In the wake of a tornado that devastated Moore, Okla., in 2013, state Attorney General Scott Pruitt (R) warned Oklahomans about a fundraising campaign by "national animal welfare organizations."

Pruitt issued a statement saying the campaign’s ads "gave Oklahomans the impression their donations would go to help animals displaced by the storm," when the money "may have gone instead to lobbying activities."

He then launched an investigation into the Humane Society of the United States.

HSUS contends such ads didn’t exist and the probe was bogus.

"We never took out any ads in Oklahoma or sent out direct mail or email saying ‘give us money so we can help the victims of the Moore tornado,’" Humane Society CEO Wayne Pacelle said. "I went to his office in Oklahoma and explained that. It should have been enough. It should have ended right there."

But Pruitt’s office continued the investigation, quietly dropping it more than two years later, after HSUS sued him for harassment. No charges or evidence of wrongdoing were ever filed against the group.

Pacelle and Oklahoma environmentalists say they see the investigation as Pruitt’s attempt to quiet HSUS while the attorney general and the livestock industry pushed policies to limit the influence of environmental and animal welfare groups.

"The Humane Society is one of the boogeymen he and the [Oklahoma] Farm Bureau kept pointing to saying outsiders were going after farmers," said Denise Deason-Toyne, president of the nonprofit Save the Illinois River. "It was always them or the EPA."

While HSUS does have a disaster response arm, Pacelle maintains that the organization decided against fundraising for animals stranded by the May 2013 tornado after consulting local groups who said they could take care of the need.

But Pruitt’s office argued the groups were using "heart-wrenching imagery of puppies and kittens" to raise money for "high-powered-lobbying and special-interest campaigns" that would harm Oklahoma farmers.

Pacelle said his organization cooperated with the investigation until January 2015, when Pruitt’s office requested documents, including minutes of meetings between the organization’s board and its lawyers, that HSUS said fell under attorney-client privilege.

Pruitt’s office called on HSUS to release the documents and denied that the office was investigating HSUS advertising about the Moore tornado.

"We never stated that the purpose of our [investigation] was to investigate the solicitations related to the May 2013 tornadoes," Assistant Attorney General Julie Bays, head of the public protection unit, wrote in a letter to the group posted in an online press release.

"Rather, in our initial letter, we acknowledged our concern that your solicitations and advertisements ‘give donors the impression that the funds donated to HSUS are used in connection with local area shelters.’ We followed up with the May 2013 tornado as an example."

HSUS responded with a lawsuit accusing Pruitt of harassment.

HSUS’s attorney, Drew Edmondson, a Democrat who preceded Pruitt as Oklahoma attorney general, said the organization dropped its lawsuit this winter because Pruitt’s office told it the investigation had closed. That was after an Oklahoma judge ruled in HSUS’s favor on a motion regarding the privileged documents. Edmondson, the state attorney general from 1995 to 2011, made an unsuccessful gubernatorial run in 2010.

Asked about the purpose of the investigation this week, Pruitt spokeswoman Shelly Perkins said, "The office can confirm that it received consumer complaints about the Humane Society of the United States following the May 2013 tornadoes." She did not respond to questions about evidence the office had found to support the claims.

The Humane Society’s IRS filings for 2013 describe many advertising campaigns, but none linked to the Oklahoma tornado. The document shows the organization gave $5,000 to the Wildcare Foundation in Noble, Okla., to care for animals after the disaster and another $7,825 in grants for other Oklahoma animal care projects.

Perkins also said the attorney general’s office was "pleased that as a result of its actions, HSUS modified their mailers and solicitations to make them more accurate" but did not respond to follow-up questions asking for clarification or examples.

Pacelle said HSUS didn’t change its fundraising methods in response to the inquiry.

"We were doing perfectly ethical advertising well before Scott Pruitt came along," he said.

HSUS and environmentalists say they see Pruitt’s probe as a way to silence the group while supporting the Oklahoma agriculture industry.

Pruitt, they said, was a strong supporter of the Right to Farm ballot question, which was defeated at the polls shortly before Pruitt dropped the HSUS investigation.

The measure would have prevented state and local governments from curtailing the agriculture industry without demonstrating a "compelling state interest." It failed following strong opposition from HSUS and Save the Illinois River, which said the measure would have severely limited their advocacy.

"There was no basis for his investigation against us to begin with," Pacelle said. "It was just a spun-up public relations campaign to clear the path for [Right to Farm]."

Pruitt has continued to praise the ballot measure.

"It was right to advance [the question] because there are out-of-state interests that try to come in and dictate farming and ranching practices that we need to be on guard against," he told the Oklahoma Farm Bureau’s annual meeting in November. "It was right to take the risk."

In September, The Oklahoman reported Pruitt’s super political action committee had received $50,000 in August 2015 from Lucas Oil Products Inc. The company’s founder, Forrest Lucas, also founded the nonprofit Protect the Harvest, which has often battled HSUS on agriculture and hunting issues and was a major proponent of Right to Farm.

HSUS and environmental groups also point to the fact that Pruitt announced his intention to investigate the group while speaking to the Oklahoma Farm Bureau in February 2014, one month before issuing his alert.

"I think there are many across the state of Oklahoma, when they give to the Humane Society, they think it’s going to local concerns," he told the "Oklahoma Farm Report," a radio program produced by the state Farm Bureau. "They believe they are actually benefiting an organization that makes sure animals are taken care of locally and at the state level. And there’s a concern that that’s not happening. As those dollars go nationally, there is a concern, perhaps, that they’re not coming back."

Neither Perkins nor the Oklahoma Farm Bureau responded to requests for comment on Pruitt’s relationship with the group.

Pruitt has long been under fire for his relationship with Oklahoma’s livestock producers.

In the 2010 contest for the open attorney general’s post, Democrat Jim Priest said Pruitt’s acceptance of $15,000 or so in campaign contributions from employees of 13 poultry companies that were the target of a lawsuit brought by then-Attorney General Edmondson had "the appearance of improper conduct" (Greenwire, Oct. 29, 2010).

Pruitt also defended agribusiness interests in his lawsuit challenging U.S. EPA’s Clean Water Rule and in filing an amicus brief supporting the American Farm Bureau Federation in its lawsuit against EPA over the federal effort to curb nitrogen washing into the Chesapeake Bay.

In another case, Pruitt joined five poultry-producing states suing California over a 2015 law requiring that all eggs sold in the state come from hens kept in cages big enough for the birds to spread their wings.

A U.S. district court judge in California recently dismissed the poultry lawsuit, saying it was brought "on behalf of a discrete group of egg farmers whose businesses will allegedly be impacted" instead of all state residents. The decision was upheld on appeal.

HSUS attorney Edmondson said he believes Pruitt’s investigation could have been retaliation for the organization’s involvement in the California case.

"There were no consumer complaints or citizen complaints about the Humane Society advertising about the Moore tornadoes," he said. "The complaints were coming from the Farm Bureau, which was upset that HSUS was a major backer of Prop 2. They just went nuts over that."

Pruitt’s work on livestock issues earned him the Oklahoma Cattlemen’s Association’s Distinguished Service Award and the 2014 Champion Award from the Oklahoma Farm Bureau. Pruitt was the keynote speaker at the Farm Bureau convention last year.

Both organizations have praised Pruitt for his investigation into HSUS, with Farm Bureau President Tom Buchanan issuing a statement shortly after the investigation was opened.

Buchanan said he and Pruitt had worked "closely and tirelessly … to make sure our membership has been protected from overregulation, whether from the EPA, U.S. Fish and Wildlife Service or even private environmental groups such as HSUS."

With Pruitt’s Senate confirmation hearing for the EPA post just months away, Pacelle said he hopes senators ask the attorney general about the investigation.

"This absolutely needs to come up," he said. "Attorney General Pruitt needs to answer the question on why he used the government as a sword to attack a private business."

At the Natural Resources Defense Council, Jon Devine said he was concerned about Pruitt because of the HSUS probe and the California lawsuit.

The California suit sparks concerns that Pruitt might use his EPA perch to fight environmental groups at the state level.

California’s poultry protections are "not significantly" different than a state environmental law that is more protective than federal regulations.

"That seems to me to be one of those situations where a state is acting more protectively than the federal government might require," he said. "The way federal environmental law works typically is that the federal law sets the baseline and the states are free to do better, but there is a question of whether he might try to use his position for action on those kinds of protections."

Save the Illinois River’s Deason-Toyne said the HSUS investigation is an example of how Pruitt advanced industry interests as state attorney general. She expects he’ll do the same at EPA.

"We are aware that he is involved in spending thousands of our taxpayer dollars on the investigation and on these lawsuits," she said. "We are trying to gear ourselves up to be optimistic, but, based on his past history, that’s not easy."