Pruitt’s holding on. But he’s tarnished 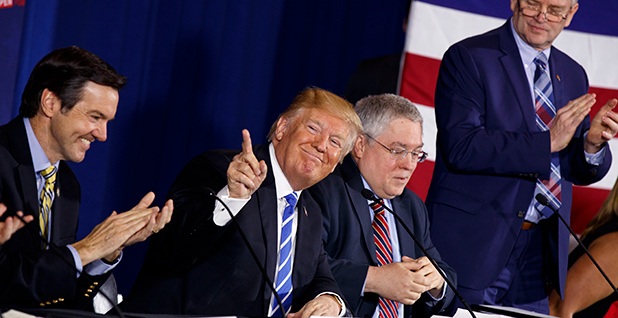 Scott Pruitt still has a job.

That seemed improbable at times during the past week, as the U.S. EPA administrator was besieged by bad press reports and the White House waffled on whether President Trump had Pruitt’s back.

But Pruitt appears to have Trump’s support — at least for now. The president praised Pruitt on Twitter on Saturday while defending his use of a lobbyist’s condo and his high-priced security and travel arrangements.

"While Security spending was somewhat more than his predecessor, Scott Pruitt has received death threats because of his bold actions at EPA," Trump wrote. "Record clean Air & Water while saving USA Billions of Dollars. Rent was about market rate, travel expenses OK. Scott is doing a great job!"

With that full-throated endorsement from his boss, Pruitt begins the week on firmer footing.

Still, even if the EPA chief sticks around, things will never be the same.

Pruitt’s reputation has been badly tarnished during the recent spate of ethics scandals, according to people who have worked with him. His critics won’t relent until he leaves office. His already troubled relationship with some of EPA’s career staffers has gotten worse. And his prospects for career advancement may have taken a hit.

"I think folks were trying to live by the oath that we will fulfill the mission and take orders," said one EPA career employee.

"We’re not just going to sit there and do what we’re told right now. I think that people are going to take a more assertive stance inside the bureaucracy."

And green groups plan to keep pressing the issues.

"Whatever Trump decides, Scott Pruitt has been a weak administrator who has simply gotten weaker with all the latest scandals," said Jeremy Symons, vice president for political affairs at the Environmental Defense Fund.

"We know what his agenda is and will continue to fight it, and we have a lot more tools to fight back with as the public is much more aware of what he’s all about," Symons said. "We’re confident that this is just the tip of the iceberg in terms of his unethical favors for lobbyists."

Even Pruitt’s supporters say the EPA boss will be operating in a new reality where he’s constantly under intense scrutiny.

"I think he will have to walk very carefully in terms of his own, shall we say, lifestyle," said Myron Ebell, director of the Center for Energy and Environment at the Competitive Enterprise Institute.

"Now that the hounds are after him … once the environmental groups start going after you, they continue to check up. They’ll be checking his garbage and seeing how many flights he takes," said Ebell, who ran Trump’s EPA transition team.

Ebell and other Pruitt supporters say he’s being unfairly targeted by those who want to oust him over his policy agenda.

"The problem with these spending accusations is that, yeah, I can see that people correctly see that there are excesses here, but what he’s done is nothing unusual compared to his predecessors," Ebell said.

Pruitt has used a similar defense, saying he’s being attacked because he’s effective. "We’re getting things done, and that’s what’s driving these folks crazy," he said in an interview with The Washington Times last week.

"He has done a huge chunk of the changes that are making the economy hum again. … Trump world loves Scott Pruitt. You have a huge base of the party who actually knows who the EPA director is, which isn’t normally the case."

Still, the hubbub could hurt Pruitt in some important ways, including staffing his agency. The nominee for EPA’s deputy administrator, Andrew Wheeler, was slated to see a vote in the Senate this month, but that’s almost certain to be complicated by the recent drama. Even if Wheeler clears the vote, the process will almost certainly give Pruitt’s critics in the Senate a forum for griping about the EPA boss.

Some think the uproar has damaged Pruitt’s chances of being promoted by Trump or running for a national political office. He’s rumored to want to be attorney general, governor of Oklahoma, a senator or even president.

"I don’t think this is a storm he could weather. There were a lot of people who were very dissatisfied with him as attorney general," he said.

Even while in Oklahoma, Pruitt had been criticized for politicizing the attorney general’s office by playing favorites and serving as a "rubber stamp" for the oil and gas industry, Hammons added. Pruitt could be especially at risk among Oklahoma Republicans who are not pro-Trump.

"If you add to that the criticism in D.C., that greatly damages his prospects in the foreseeable future," Hammons said.

"We are a very conservative state, people have been delighted by his work," he told E&E News. "There is a sense that it’s exaggerated, that he’s trying to ‘drain the swamp.’"

Walters said he doubted that the president would fire his EPA administrator, and even if he did, the optics of the firing would have to be very bad for it to have a negative impact.

He recalled watching Pruitt speak as state attorney general before a local rotary club, where he was warmly received by the audience.

"He never once touched on a single local issue, and they would turn to me and say, ‘Isn’t he wonderful? What a marvelous job he is doing,’" he said. "If someone sounds good and looks OK and is famous, they are hard to beat."

Ebell suggested the scrutiny could even help Pruitt.

"When people are hounded by their political opponents, the people that are the most enthusiastic supporters of that candidate or person often find their enthusiasm intensified by the attacks of the other side," Ebell said.

"I expect it will dissipate, and he will be in good shape to run for whatever office he wants to run for."