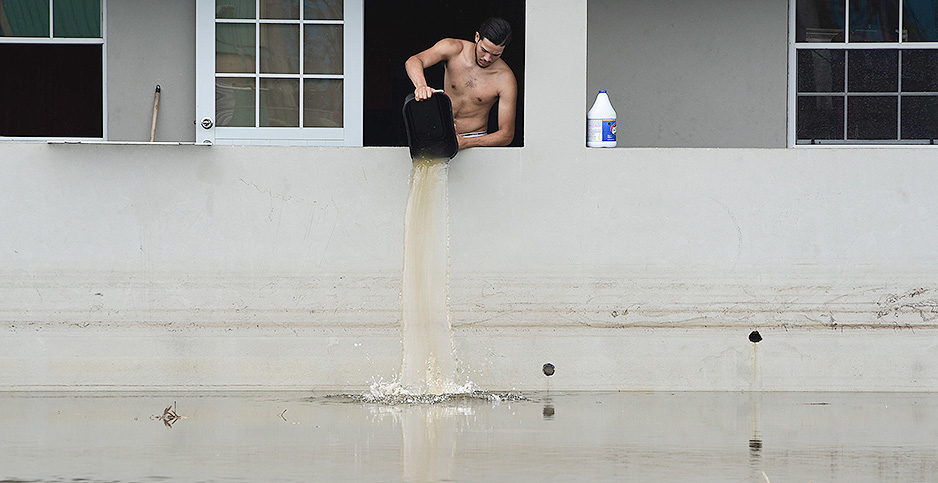 A resident bailed water from a flooded home yesterday in the aftermath of Hurricane Maria in Cataño, Puerto Rico. A week after the storm, many are still waiting for help. Carlos Giusti/Associated Press

Hurricane Maria’s destruction on Puerto Rico could spawn one of the largest mass migration events in the United States’ recent history, experts say, as tens of thousands of storm victims flee the island territory to rebuild their lives on the U.S. mainland.

The displaced islanders, thousands of whom were awaiting flights yesterday from San Juan’s Luis Muñoz Marín airport, might be among the nation’s newest "climate refugees," a demographic that includes former residents of southernmost Louisiana and the shrinking islands of Alaska’s Bering Strait.

"It could potentially be a very large migration to the continental United States," said Maria Cristina Garcia, a Cornell University historian, immigration expert, and author on large-scale population shifts, which includes a forthcoming book on climate refugees.

"Whether that migration will be permanent or temporary is still anyone’s guess," Garcia added. "Much depends on the relief package that Congress negotiates."

While the Trump administration has said it will take weeks to complete a comprehensive damage assessment for Puerto Rico, early estimates suggest that an effective response for the commonwealth and the U.S. Virgin Islands would be on par with what it will cost to rebuild from Hurricanes Harvey and Irma.

The extent of both government and private-sector spending will also depend on how much of Puerto Rico can be rebuilt, and whether some areas — such as the capital, San Juan — should be given priority while more rural areas are left to be rebuilt using local resources.

Once a pull to mainland, now a push from home

Another major question facing places like Puerto Rico and the U.S. Virgin Islands, which took a direct hit from Irma, is how to rebuild in a way that provides greater resilience against future storms. Scientists say climate change is making hurricanes more intense and more destructive.

"These are societies that have dealt with storms for centuries, so they’re not going to simply give up," Garcia said. "In some cases, [climate resilience] may have to include moving away from the coastlines."

Of course, Puerto Rico — unlike "climate refugee" communities such as Isle de Jean Charles, La., or Shishmaref, Alaska — is not literally being swallowed by the sea. Nor will it be permanently denuded, since many of its roughly 3.4 million residents will stay and rebuild, regardless of government support.

But experts say Maria will trigger profound demographic changes for Puerto Rico, which has already witnessed an outmigration of roughly a half-million people over the past decade. Many of these are college graduates and young professionals who find better job prospects in cities like Miami, New York, Chicago or Orlando, Fla., than they could ever imagine in San Juan or Ponce.

Now, however, the pull of the U.S. mainland’s big cities has been eclipsed by the push of Puerto Rico’s plunge into sudden darkness, fear and chaos.

"Some people know that the conditions on the ground are so harsh that their families are not going to be able to stay," said Edwin Meléndez, a professor of urban affairs and planning at Hunter College in New York City and director of the school’s Center for Puerto Rican Studies.

Meléndez said he has heard stories of Puerto Ricans in New York purchasing plane tickets not to visit home but to aid in the evacuation of family members if conditions continue to deteriorate.

"They say, ‘We’re going to go down there, see how they’re doing, and if we need to bring them back, we’ll bring them back,’" he said. "In the last several days, people have become increasingly worried about the frail and the elderly back home, about parents and grandparents."

Meléndez projected that Maria’s damage to Puerto Rico’s physical, social and economic fabric could result in as many as 200,000 migrants to the U.S. mainland over the next 12 months, with many of the new arrivals relocating to Florida, New York and New Jersey — all of which have existing large Puerto Rican communities.

In Washington, most lawmakers have not turned their attention to a potential mass relocation of Puerto Ricans to the U.S. mainland.

Many are, however, questioning the Trump administration’s recovery efforts, including its hesitation to waive a 1920 law that allows only American ships to travel between U.S. ports.

The Trump administration is also trying to hold off congressional trips to Puerto Rico while recovery efforts continue, even as Rep. Luis Gutiérrez, an Illinois Democrat born in the island territory, said he plans to visit on Friday.

Gutiérrez’s spokesman said he had heard nothing concrete about mainland cities and states preparing for an influx of migrants, but only "rumors."

Other Puerto Rico-born lawmakers, like Rep. Nydia Velázquez (D-N.Y.), have spent the past week emphasizing Puerto Rico’s bond with the United States — and the responsibility that entails.

"New York and Puerto Rico are inextricably linked. For New Yorkers, Puerto Ricans are family — for some figuratively and, for many of us, literally," she said in a statement.

"Puerto Ricans are Americans," she said. "They have fought in nearly every major conflict, shedding blood and sacrificing their lives for the rest of us. We cannot and will not turn our backs on them."