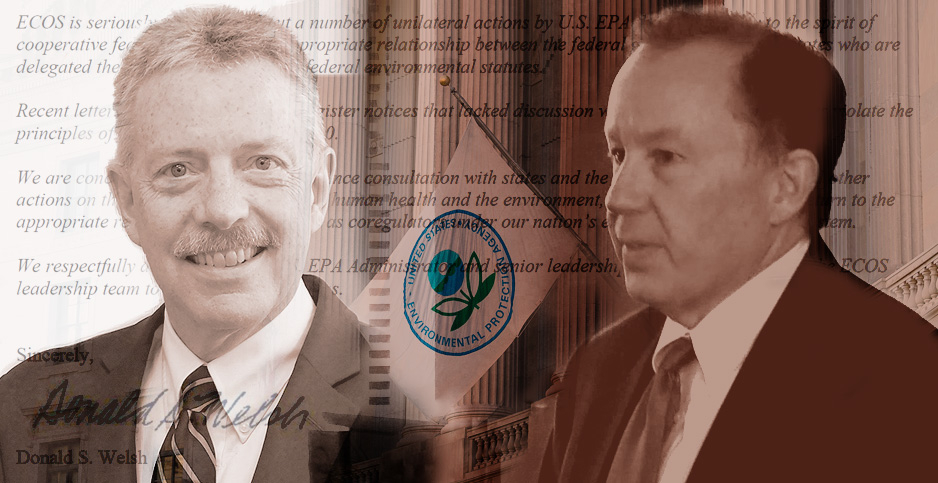 In a letter to EPA Inspector General Sean O’Donnell, Democracy Forward requested the office dig deeper into statements by state agency leaders praising EPA. A senior EPA official had helped write the comments last September when the Environmental Council of the States criticized the federal agency after it threatened sanctions against California for water quality issues and threatened to revoke federal highway funds over Clean Air Act compliance issues.

Emails and text messages obtained by E&E News under public records requests show that Doug Benevento, EPA’s associate deputy administrator, helped draft those comments the day before ECOS’ letter critical of EPA was released to the public. EPA then shared those remarks with reporters who contacted the agency for comment on ECOS’ letter the following day (Greenwire, Jan. 23).

The role of Benevento, whom President Trump plans to nominate for deputy administrator at the agency, in those statements was not disclosed at the time, which has sparked Democracy Forward’s request to the IG.

"The facts as reported in E&E News — and as documented by the underlying [Freedom of Information Act] records — raise troubling questions regarding whether EPA officials have violated federal laws prohibiting the expenditure of government funds to mislead the American people through covert propaganda," said Anne Harkavy, the group’s executive director, and Travis Annatoyn, its senior counsel, in the Feb. 12 letter.

"Accordingly, we respectfully request that you investigate EPA’s role in drafting, disseminating, and falsely attributing statements of support for agency policies," the letter says.

The letter cites several examples of the Government Accountability Office finding agencies had engaged in prohibited "covert propaganda," including the congressional watchdog’s 2015 opinion that EPA had done so in its social media campaign in support of the Obama administration’s version of the Waters of the U.S. rule.

"Associate Deputy Administrator Benevento evidently organized a scheme whereby the Administration’s talking points would appear to flow from state officials instead of their actual author: the EPA itself," said the group.

"The Associate Deputy Administrator made no effort to ensure that the public would understand the government’s preeminent ‘role in creating the material,’ and consumers of EPA’s press release had no means of discerning that statements ‘contrary to [ECOS’] assertions’ were merely components of EPA’s self-authored, self-serving communications strategy instead of expressions of support generated by the state officials," says the letter.

An EPA spokeswoman rejected the charges in Democracy Forward’s letter.

"These allegations are baseless and without merit. EPA has a strong relationship with state leaders and continues to work and meet with states on both policy and implementation regularly," said the EPA spokeswoman.

She added, "Senior staff at EPA has met numerous times with state environmental leaders and we look forward to working closely with them in the future. This Administration, as many others before, cooperate with States on policy matters, and this is no different."

Charisma Troiano, a spokeswoman for Democracy Forward, said the group has not received a response letter from the EPA IG office.

"Democracy Forward’s request for an OIG review is currently being considered by the IG and his leadership team," Lagda said.

The discord between EPA and ECOS has fueled worries over an EPA detailee to the group who was recalled as well as EPA’s funding for the group. The federal agency has sent millions of dollars to ECOS over the years.

In a letter to EPA Administrator Andrew Wheeler earlier this month, Sens. Tom Carper (D-Del.) and Sheldon Whitehouse (D-R.I.) said they had learned EPA may have withheld or delayed more than $250,000 in grant funding to ECOS. The senators noted that ECOS had been waiting for months for the funding, which is usually disbursed in September or October of the year.

An EPA spokesman later said the agency was prepared to release $265,000 in grant money to ECOS. The agency has denied it ever threatened funding for the states’ group (Greenwire, Feb. 6).