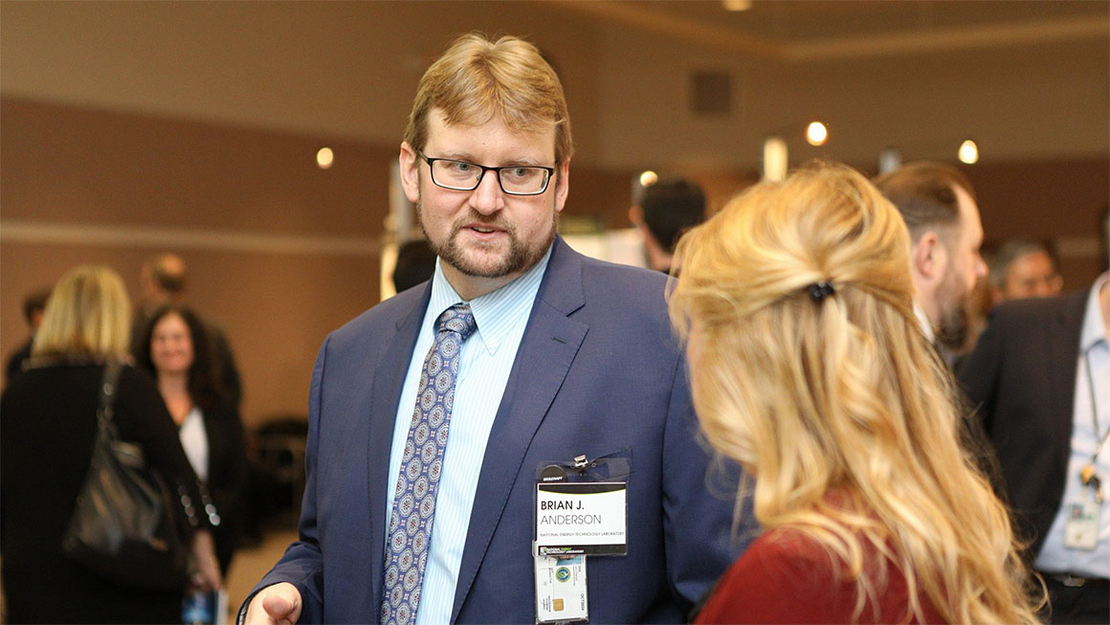 His grandfather was an underground coal miner in West Virginia’s Kanawha Valley. His father ended up in oil and gas after both parents worked, for a time, as teachers.

“They couldn’t make ends meet with two salaries as schoolteachers. So he ended up in the oil and gas sector,” Anderson said about his father, who grew up in a coal camp.

As a teenager, Anderson worked at an aluminum plant in Ravenswood, W.Va. — at the time the largest user of electricity on Appalachian Electric Power’s coal-fired grid. The plant’s reduction unit has since closed due to rising power prices.

Now Anderson has taken on a new role: helping figure out new paths for coal-reliant communities in West Virginia and other states. In April, he was picked to lead the White House’s task force to revitalize coal and power plant communities (Energywire, April 23).

In many ways, the job was made for him, Anderson said.

After studying chemical engineering at the Massachusetts Institute of Technology, Anderson returned to his home state to join the faculty of West Virginia University.

The Biden administration’s working group isn’t the first federal effort to try to breathe economic life into communities reeling from coal’s decline. Anderson said he hopes the scale of the group’s ambitions will differentiate this initiative from others.

Already, the Commerce Department’s Economic Development Administration has made $300 million available for grants to communities that have been dependent on coal. That’s 10 times the amount it usually provides (Greenwire, July 22).

Were you selected for this role, or is it something that you sought out?

It became mutual. For me, I have felt like my entire career and lifetime led up to the point of finding this balance — of me filling this role — because even when I was in academia, founding the Energy Institute at West Virginia was about economic development.

Right before I came to NETL, I was working hand in hand with the West Virginia development office and the Department of Commerce on economic development issues almost on a daily basis.

So this really is the convergence of a lifetime being in West Virginia, seeing firsthand coal-impacted communities, through learning and assisting to build technologies for the use of fossil fuels and minimizing their environmental impact to now working across all of the national laboratories.

Previous administrations have had similar goals to revitalizing coal mining and power plant communities that have lost some of their economic success. Is the working group learning from those past efforts, and how does it change your approach?

We absolutely are. Some of the past efforts have been somewhat siloed within individual agencies. All very well-meaning and, in many cases, quite effective within the scope that they were being asked to perform.

Now, this is thinking a lot bigger than had ever been in the past. We’re taking 13 federal agencies, and we’re reaching in every week to identify the ways that they can assist with coal communities and putting them together to leverage one off of another. It is something that has not been tried in earnest like we’re trying today.

That’s not a criticism of past programs. We are taking on a lofty and challenging effort, particularly on the federal government side, to be able to coordinate across all of these agencies.

Ultimately, we’re driving toward a one-stop shop for the energy communities to be able to access comprehensive programs touching multiple aspects of the federal government and put together comprehensive economic redevelopment plans.

Your initial report from the working group had a list of the 25 priority areas. I’m wondering what you’ve heard from communities — West Virginia’s different from Wyoming, which is different from the Navajo Nation. Have you interacted with folks from these communities yet, and what are some of their ideas?

You’re absolutely right that none of these communities are the same. Even within the 25 priority areas, there are communities that are different in infrastructure and different assets.

There is a difference in need from some communities that are more heavily reliant on labor versus machinery. Subsurface mining — the mines in West Virginia, Pennsylvania and Virginia — have a higher worker-to-tonnage ratio than those in Wyoming. That doesn’t mean that the Western communities are not as heavily reliant because of the tax revenues that help pay for schools and local infrastructure.

The 25 communities list missed places like Colstrip, Mont., because of the speed at which the initial report was done using metrics specifically to employment and workers. Some of the feedback we’re getting from communities that we’re listening very carefully to are the secondary concerns when it comes to the tax revenues and things like that.

The Biden administration has talked a lot about creating union jobs, especially with a transition to a clean energy economy. How do you achieve that in terms of this working group?

The priorities of the working group are about ensuring that the jobs are high-paying, benefit-eligible jobs. Because the jobs that they’re displacing — say, the mining jobs — are largely union jobs with worker protections, benefits, health care and good wages.

We’re gathering some policy examples that we’ve seen from across the states. One interesting example in the state of Virginia was that as they’re designing the economic redevelopment plan, they are only counting successes on jobs over a floor of a salary wage.

That’s one policy in one particular state, but as a guiding principle it is not about just simply replacing a job for job with counting hard hats or head counts. It’s really about the family-sustaining careers that folks have and ensuring that that’s the type of job that they’re replaced with.

In order to do that, there has to be, in many cases, lots of investments in infrastructure, certainly a focus on manufacturing and putting lots of the policy proposals of the administration together.

The White House has supported the idea of extracting critical minerals and rare earth elements from coal and coal waste. Is that a realistic, commercially viable option?

I’ll put my NETL hat on very quickly because we manage and perform a lot of that program with rare earths. We’re definitely on track in achieving lots of technical goals with the purity of the extracted materials like high-quality rare earth oxides and rare earth metals from coal, coal waste and coal byproducts.

The real commercial barrier comes down to the cost and the economics. When we think about rare earths in the context of national security, there are other priorities in terms of developing stockpiles and supply chains domestically to where commercial viability has multiple answers.

What role does reclamation of abandoned mines play in the working group’s goals?

It’s one of our five guiding principles — reclaiming and remediation of past environmental degradation. Because when we do that, there’s an opportunity to provide immediate jobs, whether it’s cleaning up abandoned mine lands or other sort of remediation like acid mine drainage. Those can be very quick levers to pull to create economic development and create jobs in the near term.

Those are not the long-lasting jobs, but that’s where we put together the types of reclamation leads to infrastructure that can be utilized for economic redevelopment.

Wise County, Va., is a great example of this. Building a data center on reclaimed mine land that’s powered by solar. There are all kinds of other examples across Appalachia to provide reclamation into economic development.

Is carbon capture part of the solution? Is this on the horizon?

I would list three big technologies that can help contribute altogether in conjunction with one another and separately. One is carbon capture and sequestration. We need to build CO2 pipelines.

The second big technology is hydrogen. It’s very well coupled because as we decarbonize some of the harder-to-decarbonize parts of the economy, we will need to build hydrogen clusters around the country like has been announced in the Houston area.

The third is carbon materials from coal. In fact, we’ve spearheaded a lot of work in the conversion of coal into high-value materials like carbon fibers and graphene and have a partnership with Oak Ridge National Laboratory. The potential to then create additional opportunities and additional industries with value added from coal gives us a great lever to provide the economic development right at the mine mouth.