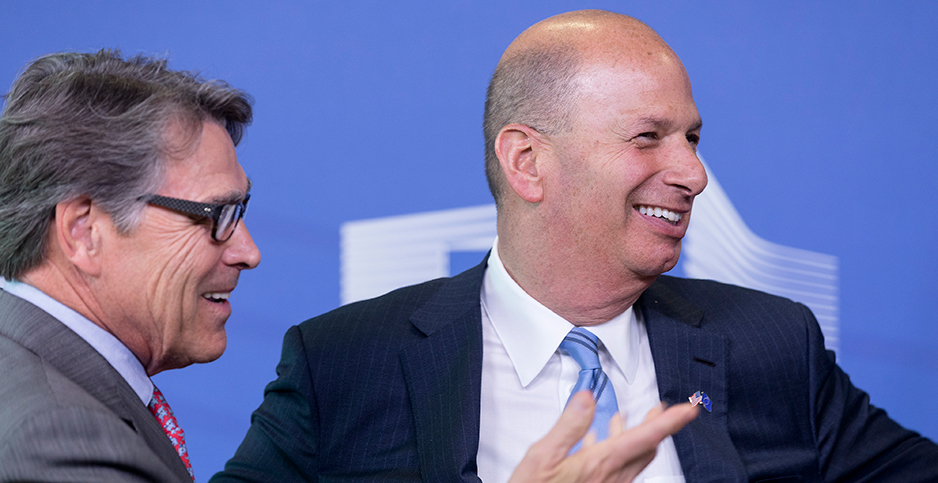 When Energy Secretary Rick Perry traveled to Ukraine in May for the inauguration of President Volodymyr Zelenskiy, he carried a list of names that included a Pulitzer Prize-winning energy expert and longtime political donors.

Perry gave the Ukrainians his recommendations because, he said, they would be helpful as Zelenskiy sought to make an imprint on Ukraine’s state-owned energy company, Naftogaz.

But whether that list was a helpful entreaty or an effort by Perry to reshape the leadership of Naftogaz to benefit his political associates is a growing question that could subject the outgoing secretary to further investigative inquiries as he prepares to leave the Trump administration.

While Perry’s actions in Ukraine "raise ethical questions," there is no public evidence that Perry violated international corruption laws, said Alexandra Wrage, president of Trace, an anti-bribery organization that advises companies on how to avoid getting entangled in corruption.

Yet she noted that the Trump administration is "muddying the waters" by claiming that its political opponents like former Vice President Joe Biden engaged in corruptive behavior in Ukraine.

"Anti-corruption is a popular, ostensibly nonpartisan issue that generally resonates with voters," she said in response to emailed questions. "Internationally, we’ve seen foreign officials use anti-corruption enforcement as a distraction, or as a way to undermine specific individuals. Increasingly, it seems that the current administration is muddying the waters between legitimate efforts to address corruption and something more cynical."

Perry has claimed for weeks that the list of American energy experts he offered to the Ukrainians was merely a suggestion to help improve governance of Naftogaz. However, released text messages from one of Perry’s associates on Ukraine policy cast his role in a different light and suggest Perry may have applied more pressure than he has acknowledged on Naftogaz.

Perry sought an "expanded board" at Naftogaz, according to Kurt Volker, who along with Gordon Sondland, U.S. ambassador to the European Union, and Perry were known as the "three amigos" shaping U.S. policy toward Ukraine.

The Associated Press reported yesterday that one of the people on Perry’s list, Michael Bleyzer, received a potentially lucrative contract for oil and gas exploration from the Ukrainian government. Even though Bleyzer and his business partner offered less than the Ukrainian government’s bid for the 50-year drilling contract, they were awarded the rights to the contract, the AP reported. Bleyzer’s business partner, Alex Cranberg, is a Republican megadonor who loaned his plane to Perry during the former Texas governor’s unsuccessful 2012 presidential campaign, according to the AP.

The supervisory board of Naftogaz is chosen by the Cabinet of the Ukrainian president with consultation provided by the United States and Europe, as well as institutions such as the International Monetary Fund.

‘Perry is the most negative’

E&E News has previously reported that Bleyzer made at least three visits to Energy Department headquarters during the Trump administration, including weeks before Perry traveled to Ukraine in May for Zelenskiy’s inauguration. That’s when he provided his list of recommendations (Energywire, Oct. 18). Another person on the list was Robert Bensh, an oil and gas businessman and a past adviser to former Ukrainian President Viktor Yanukovych, who was ousted during the country’s 2014 popular uprising because of his close ties to Russia.

The list submitted by Perry also included Daniel Yergin, the Pulitzer Prize-winning energy expert, and former Ukraine Ambassador Carlos Pascual. Both Yergin and Pascual are now at IHS Markit Ltd. Yergin was not initially aware that his name had been submitted by Perry, and Pascual has said Energy Department officials notified him that he might hear from Ukrainian officials, but he never did.

"No one ever mentioned anything to me about the Naftogaz board, nor did the Ukrainians," Pascual told E&E News.

The Energy Department did not respond to requests for comment. Perry refused to testify in the impeachment proceedings. Last month, Perry told The Wall Street Journal that the Ukrainian government asked him for names.

"They asked us for people who would be good to help either be on their board or consult with them in a global way," Perry told the paper. "They needed people giving them advice about energy sector and economics."

Democratic lawmakers conducting the impeachment inquiry want to know what exactly Perry pitched to the Ukrainians. Perry has said his list was merely a suggestion, a group of experts who could be helpful to the country as it continued to reform Naftogaz.

However, text messages that came to light during impeachment proceedings show that Perry may have been playing a more active role in shaping Naftogaz. On June 19, about a month after Perry returned from Zelenskiy’s inauguration, Bill Taylor texted Volker about the current head of Naftogaz, Andriy Kobolyev. Volker wrote that Perry was seeking to expand the board of the state-owned energy company. Volker was working closely with Perry to shape U.S. policy toward Ukraine. By then, Sondland was publicly saying that he, Volker and Perry were the "three amigos" leading U.S. policy toward Ukraine.

"Kurt, what’s the view of Kobolyev among the three of you?" Taylor wrote.

"I think Perry is the most negative — sees him as obstructing both the upstream and downstream opening up of the market. Perry also wants 2 senior US energy industry people on an expanded board," Volker responded.

"I remember Naftogaz before the reform, so I know K did a lot of good," Taylor wrote, referring to Kobolyev. "But now he needs to get behind even more ambitious reform. He is capable of doing it, but he needs to be committed to it."

Perry’s actions may be ethically murky, but they do not appear to violate the federal Foreign Corrupt Practices Act, said Mike Koehler, an expert on the FCPA at Southern Illinois University. And it’s not just true of Perry, he said. Nothing that has emerged publicly at this point suggests the Bidens; Trump; or Rudy Giuliani, Trump’s personal lawyer, violated that law, he said.

The impeachment inquiry casts a long shadow on Ukraine, potentially undermining the country’s attempt to join the European Union and to gain more independence from Russia.

"Any quid pro quo dealings in Ukraine undermine anti-corruption efforts, reintroduce and bolster corruption schemes and weaken Ukraine’s international standing, along with its chances of joining the EU," Wrage said. "Additionally, corruption refocuses international efforts away from assisting Ukraine in its struggle against Russia."