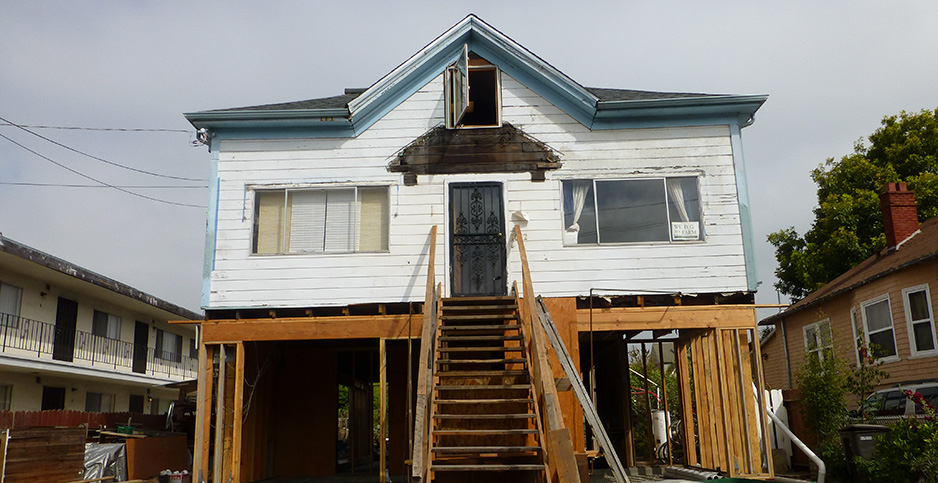 The Virginia Department of Housing and Community Development has a pilot program to train contractors how to raise homes. A house is raised in San Francisco. Mike Linksvayer/Flickr

The building and construction trades, facing what may be the deepest recession in a century, could tap a new and potentially lucrative market helping communities and homeowners lift houses out of chronically flooded areas.

Virginia is testing the water.

A Hampton Roads startup company in partnership with the Virginia Department of Housing and Community Development welcomed its first class this week to the commonwealth’s Home Raising Academy. It’s an eight-week course for homebuilders, contractors and tradesmen to learn the fundamentals of house elevation.

Currently a niche activity within the building sector, an expansion of lifting houses and other flood mitigation activities could provide a boost for thousands of contractors facing a steep decline in business from the coming recession, experts say.

Resilient Enterprise Solutions hopes to entice hundreds, and possibly thousands, of contractors to learn the engineering and geotechnical skills necessary to lift a home above flood elevation without weakening its structure or destroying its aesthetic appeal.

"We’re using this opportunity to pilot an alternative to abandoning homes while creating opportunities for contractors who are vested in local economies," John Sargent, the company’s CEO, said in a telephone interview. "We’re not focusing on companies that come in and do the ‘lift and leave’ kind of stuff. That’s a different business. Our focus is on areas already doing these types of activities but don’t have the workforce to support it."

The Home Raising Academy is believed to be the first of its kind in the country. It emerged from a $120.5 million Department of Housing and Urban Development grant awarded to the commonwealth in 2017. A sliver of those HUD funds was earmarked to "spur innovation around products, services and workforce development programs that help coastal communities adapt to climate change."

Resilient Enterprise Solutions, or RES, was one of six grant recipients under the Coastal Community Resilience Challenge.

"We’re doing what we can to get started," Sargent said. "We’ll be looking for larger grant opportunities to do this training and eventually build a workforce to scale this up. We think there’s going to be plenty of work up and down the East Coast."

Elevating single-family homes in coastal zones is not new, but it has gained attention since Superstorm Sandy flooded thousands of homes in 2012. At the height of post-Sandy recovery, firms were raising 20 to 40 homes per month under federal and state programs to move residents out of the floodplain.

The government has supported home elevations for years under pre-disaster mitigation programs administered by the Federal Emergency Management Agency and Department of Housing and Urban Development. An anticipated surge of federal dollars for pre-disaster mitigation — including from floods — could come with the government’s COVID-19 disaster response, the cost of which is expected to soar beyond all previous disasters (Climatewire, April 16).

Most decisions about that spending will fall to state and local officials, many of whom are already engaged in removing and raising homes above flood elevation, experts say. Sargent said demand for home elevations could boom under federal programs, including a new FEMA funding mechanism called the Building Resilient Infrastructure and Communities that is just rolling out.

RES believes it could make lifting homes less costly by creating alternative financing approaches for homeowners and certifying contractors that offer home elevations. Sargent said some owners participating in the National Flood Insurance Program could see reduced premiums by raising their homes and the savings could help offset the cost of a home elevation.

But other experts say lifting houses comes with downsides.

Elevations can be more costly than other solutions — such as buyouts and wet-proofing flood-prone homes. Some say they are also a poor use of tax dollars because they allow homeowners to remain in flood zones rather than move to higher ground and allow floodplains to revert to a more natural state. Lifted homes also remain connected to utilities and receive essential public services, most of which are publicly funded.

"It has its place, but it may also be a lot of money and time spent to put off the inevitable," said Rob Moore, a senior policy analyst at the Natural Resources Defense Council. "If a homeowner wants to do it, go for it. It’s better than regular flooding. But using public dollars to retrofit a bad decision by the local government to build in a vulnerable place? That’s a tougher sell."

Home-lifting experts acknowledge the drawbacks. But they say it’s impractical to address every flood-prone community through retreat and relocation, especially in urban areas with little room to grow. And restricting taxpayer funds for raising homes could expose millions of houses — including middle- and low-income housing — to high risk from storm surges, sea-level rise and extreme precipitation.

"It’s a shame that a place has to flood over and over again before it gets any attention," said Danny McKearan, chief operations officer and general manager of Ducky Johnson Home Elevation LLC, a New Orleans firm specializing in floodplain house lifting. "It’s much more expensive to do this work after a storm. Unfortunately, that’s the way most of these elevations have been done."

McKearan agreed that elevations should not be done "in areas that shouldn’t have been built out in the first place." But, he said, it’s a false argument that communities must choose one approach or the other.

"I believe there should be buyouts, and there are some areas in southern Louisiana where a strong argument could be made that buyouts are the best option," he said. "However, take a ride with me to Houston, Texas, to an area that has 1 million people in it. No amount of money is going to buy all of those homes."

Laurie Schoeman, senior national program director for resilience and disaster recovery at Enterprise Community Partners, a national nonprofit focused on community development and housing security, said that "elevating homes makes sense in some circumstances," especially for long-established, tight-knit communities where residents depend on one another for physical, economic and emotional well-being.

"Lifting a home above the floodplain, that’s going to reduce future risk for homeowners that don’t want to leave their communities," she said. "Especially with affordable housing, the argument is these homes should not be rebuilt for a variety of reasons."

But, she added, programs to elevate homes should try to minimize negative outcomes, including loss of community cohesion; disruptions in the size, scale and continuity of housing stock; and tension between owners of elevated homes and those who look up at them.

How these questions are answered in Virginia and other coastal states where pre-disaster mitigation projects could spur economic recovery remains to be seen. Gov. Ralph Northam (D), in announcing six innovation grants last year, endorsed public-private partnerships to "continue to look at new ways to address the growing challenge of extreme weather events and sea level rise."

Lifting houses could be one piece of the puzzle.

"It really has to do with the local personalities and perspectives of these municipalities," Sargent said. "Some have said they like this idea, some don’t. What all realize is that there’s [a huge] asset out there that needs to be protected."