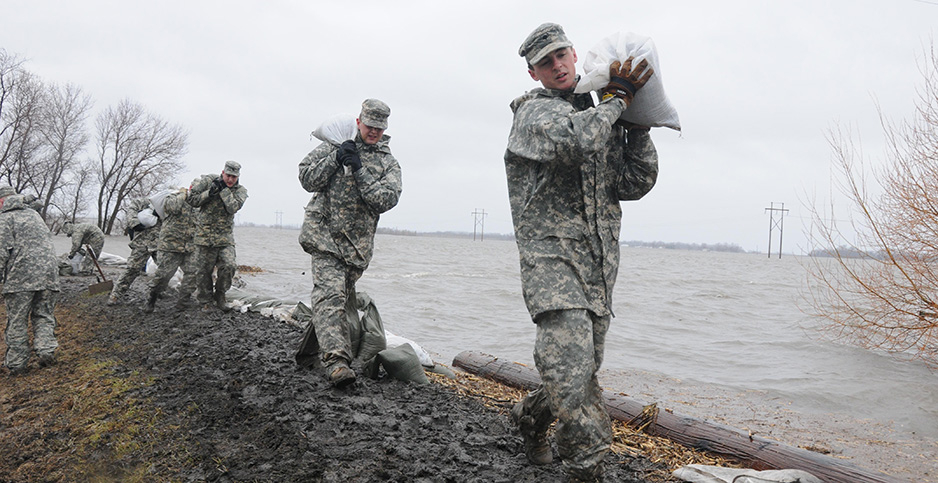 Residents of Fargo, N.D., are working to place 1 million sandbags along the city’s historic riverfront before the Red River of the North begins rising to what could be one of its highest flood crests since 2009.

But the heavier lift may be in the state capital, Bismarck, where lawmakers will decide whether to place an additional $300 million in taxpayer dollars behind what has become one of the most expensive flood control projects in recent U.S. history.

Officials say the cash infusion is needed to complete a $2.75 billion dam, catchment and 36-mile-long diversion channel along the northward-flowing Red to protect the city of Fargo and its across-the-river neighbor, Moorhead, Minn. More than 200,000 people in the area live with perennial flood risk.

Experts say climate change is driving that risk higher as the region sees rising average temperatures and greater variability in precipitation. Even small changes in the Red River Valley’s climate — particularly in spring when the region melts its winter snowpack — could have major impacts for Fargo-Moorhead, where development on both sides of the river extends into the floodplain.

Catastrophic floods in 1997, 2009 and 2011 strengthened resolve among federal, state and local officials to come up with a permanent flood fix. In 2008, the Army Corps of Engineers began pursuing what became the Fargo-Moorhead Area Diversion Project. Congress authorized work in 2013 on what was then a $1.8 billion project.

Yet the cost has escalated after years of legal challenges and an overhaul of the project’s plans to meet environmental permitting requirements in Minnesota. The diversion project is now expected to cost nearly $1 billion more than original estimates. Proponents are lobbying hard to meet the higher price tag.

Last week, the Army Corps of Engineers signed a new project partnership agreement (PPA) raising its cost share from $450 million to $750 million after negotiations with Sen. John Hoeven (R-N.D.), who sits on both the Senate Appropriations and the Energy and Natural Resources committees.

"It’s not a matter of if we’re going to flood, it’s when and how much," Hoeven told officials gathered in Fargo last week for the formal signing of the PPA.

The next hurdle lies with the North Dakota Legislature, which is being asked to take a similar cost-share increase, pushing its total contribution to $870 million.

North Dakota Gov. Doug Burgum (R) has asked fellow Republicans, who hold majorities in both legislative chambers, to meet the full funding request. He says the project will bring "significant value" to North Dakota’s most populated region and a critical cog in the state’s non-farm economy.

"I think there’s widespread support for the project, but we have a lot of need in North Dakota and legislators are obviously weighing needs in various parts of the state," said Mike Nowatzki, a spokesman for Burgum. "The governor has emphasized this is a very cost-effective project and has a lower cost share than other flood control projects that have been done in our state."

The North Dakota House Appropriations Committee this week discussed advancing a Senate measure that would provide $133 million more to the diversion project, but it remained unclear if lawmakers would consider the full $300 million request.

One of the House appropriators, state Rep. Mike Nathe (R), told the Fargo Forum newspaper that he wants to "make sure that they meet our expectations," but he did not specify what conditions lawmakers may impose.

Meanwhile, attorneys for the FM Diversion Authority are seeking approval from a federal judge in Minnesota to allow some elements of the project to move forward.

The U.S. District Court for the District of Minnesota placed an injunction on all project work in 2017, pending a final resolution over permitting issues with Minnesota’s Department of Natural Resources. Officials have warned that additional delays could raise the cost of the project by as much as $70 million per year.

"The Diversion Authority is betting that they are now at the point where the legal issues will be solved," Norland said. "But other people are still pushing their side of things. There’s still some ground to be covered."

In the near weeks, North Dakota officials will remain on flood watch as spring temperatures begin to thaw what was one of the region’s deepest snowpacks in recent memory.

Amanda Lee, a National Weather Service hydrologist in Grand Forks, N.D., said the Red River currently has a 5 to 10 percent chance of breaking the record 40.8-foot flood crest at Fargo set in 2009.

But she added that conditions are subject to change over the next two to three weeks as seasonal temperatures rise. A prolonged or heavy rain event could quickly change the river’s condition.

"Luckily for us, most of the precipitation that has been occurring recently has been going south of us," Lee said. "Unfortunately our gain is someone else’s pain south of here."