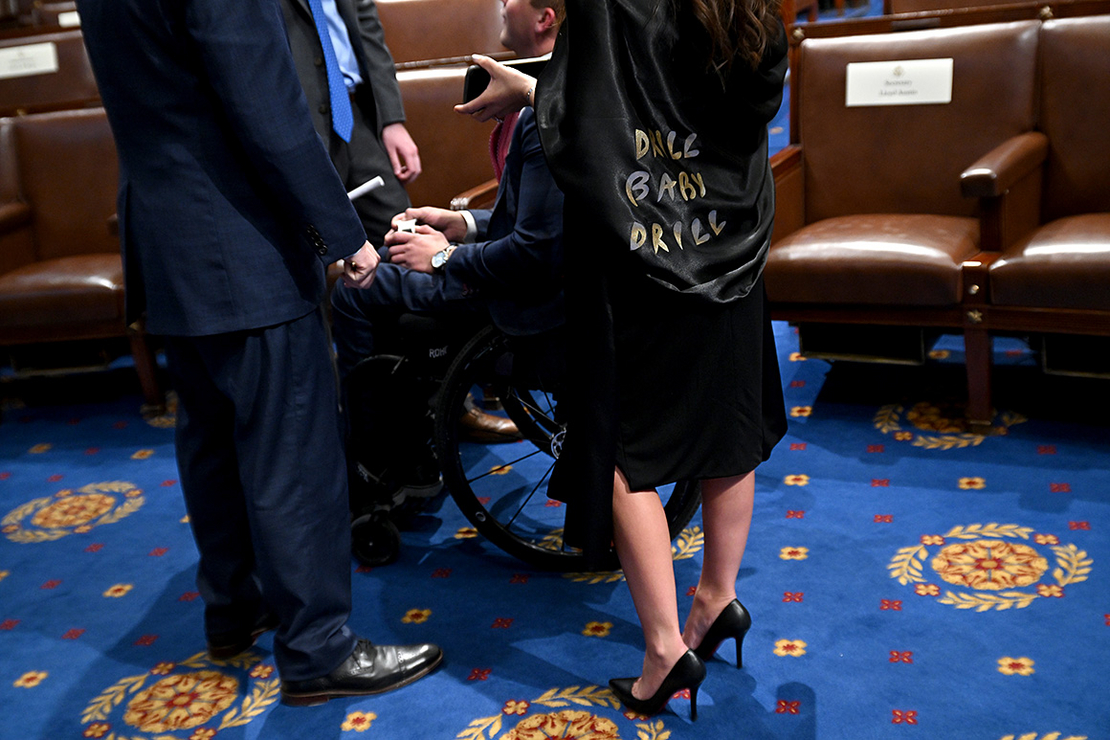 Rep. Lauren Boebert (R-Colo.) with the phrase "drill baby drill" on her clothes during the State of the Union address. Jim Lo Scalzo/Pool/Getty Images

As energy prices continue to soar due, in part, to the Ukraine crisis, Capitol Hill lawmakers have been looking for solutions. What they’ve found are the exact same energy policy arguments they’ve been making for the past year.

For Republicans, that means an onslaught of rhetorical attacks and repackaged legislation to undo what they allege has been a year-plus war on American energy by the Biden administration. The only difference this time is that the bills seek to counter Russia’s oil and natural gas piggy bank.

For Democrats, that means an urgency to accelerate the transition away from fossil fuels and greenhouse gas emissions, lowering demand, as outlined in their $500 billion reserved for clean energy technologies as part of their reconciliation push.

Despite this divide, which was on full display ahead of the State of the Union address, there is a growing, bipartisan movement acknowledging the need to insulate the United States against Russian threats to global energy markets.

One idea gaining currency is a potential ban on imports from Russia. But whether to fill that oil gap through the supply or demand side of the equation, the two sides are split.

Even ahead of Russia’s invasion of Ukraine, President Biden warned about the potential blowback a war could inflict on domestic energy prices, especially as costs already hovered near highs not seen in nearly a decade due to pandemic slowdowns (E&E Daily, Feb. 16).

That acknowledgment has been accompanied with promises to limit the blowback. Yesterday, the Department of Energy announced a coordinated release of crude oil reserves totaling 60 million barrels globally (Greenwire, March 1).

Republicans and some Democrats have insisted that the Biden administration move to block any imports of Russian energy entering U.S. markets. In 2021, imports of Russian oil rose 28 percent, according to Politifact, becoming the second-largest exporter to the U.S.

Sen. Roger Marshall (R-Kan.) is taking the lead on one bill to ban imports. Sen. Ed Markey (D-Mass.) floated another one. But while Marshall wants to boost domestic production, Markey seeks to encourage the energy transition.

Ahead of Biden’s speech, Republicans unleashed a wave of floor remarks and legislative gambits to press their energy production agenda.

In the House, the top Republicans on the Energy and Commerce and Natural Resources committees took a long-shot attempt to call up their recently introduced legislation, H.R. 6858, as part of a procedural motion for a bill helping burn pit veterans. The attempt failed.

The bill from Reps. Cathy McMorris Rodgers (R-Wash.) and Bruce Westerman (R-Ark.) would immediately approve the Keystone XL pipeline and prohibit any pauses on new lease sales on public land. The measure repackages a host of energy priorities pushed by Republicans in the past year (E&E Daily, March 1).

“This is how we shut down Putin’s war chest, stand by Ukraine, empower our allies, protect our national security and create jobs here at home,” McMorris Rodgers said on the floor.

Foreign Relations ranking member Jim Risch (R-Idaho) asked for the immediate consideration of his sanctions package, which would in part target the Russian energy sector. The unanimous consent request was blocked by Sen. Chris Murphy (D-Conn.).

Another Republican, Sen. John Barrasso of Wyoming, the Energy and Natural Resources ranking member, asked for Senate attention for his bill, S. 819, that would streamline the export permit reviews for liquefied natural gas export permit applications to NATO countries and other U.S. allies.

“We’re much better off as a nation selling energy to our friends than from having to buy it from our enemies,” Barrasso said on the floor.

A handful of moderate Democrats have sought to promote U.S. fossil fuels in the face of the war, including Senate Energy and Natural Resources Chair Joe Manchin (D-W.Va.), who called this week for a ban on imports of Russian energy products and additional domestic oil and gas production. Manchin’s office has sent out several releases on the matter.

Manchin said that “as a nation we must commit to once again achieving complete energy independence by embracing an all-of-the-above energy policy to ensure that the American people have reliable, dependable and affordable power without disregarding our climate responsibilities.”

For the most part, Democrats dismissed the idea that Biden’s climate and energy policies have anything to do with the Ukrainian crisis rocking oil markets.

In a lengthy tweet thread yesterday, Rep. Sean Casten (D-Ill.) said “those who are arguing that we should instead invest in more fossil infrastructure are either evil or stupid.”

The real conversation about energy policy, Casten said, should center on ending dependence on a “corrupt petrostate” by expanding domestic renewable energy.

Rep. Jared Huffman (D-Calif.) said he would be open to some near-term expansion of domestic oil and gas production, but the current crisis does not change the long-term necessity to address climate change.

He said that new oil and gas export infrastructure or new leases on public lands would have no immediate impact on energy supply, particularly given that infrastructure projects can take years to come online.

“We’re awash in oil and gas right now. We can redirect some of that to Europe to address the Ukraine problem,” Huffman said. “But the long-term needs to be full speed ahead on clean energy.”

While Manchin has asserted himself on Ukraine policy in recent days, House Democrats were more deferential to the Biden administration in how it approaches Russian energy.

Senate Majority Leader Chuck Schumer (D-N.Y.) told reporters that Russia wasn’t the issue. “The real problem with increased gas prices is gouging and monopolies,” he said. “Democrats are focused on those two issues.”

Energy and Commerce Chair Frank Pallone (D-N.J.) said he is “very supportive” of the action the administration is taking on Ukraine but is not currently planning specific legislation or hearings on the energy issues surrounding the crisis.

Rep. Paul Tonko (D-NY.), chair of the Energy and Commerce Subcommittee on Environment and Climate Change, urged Democrats to show a “united front” on Ukraine and energy policies.

“There’s going to have to be a coordination of energy policy, but it should not be used as fodder for a divide,” said Tonko, who did not rule out “adjustments” in energy policy due to the crisis but said he would take his cues from the White House.

Rep. Scott Peters (D-Calif.), another member of E&C, said he sees climate as a “secondary link” to the current situation in Ukraine.

“I think in the long run, having oil and gas disruptions is always going to be part of the landscape of an oil and gas economy and one reason to move away from it, you could argue,” Peters said. “But in the short run, it’d be a shame to see people play climate politics around this.”