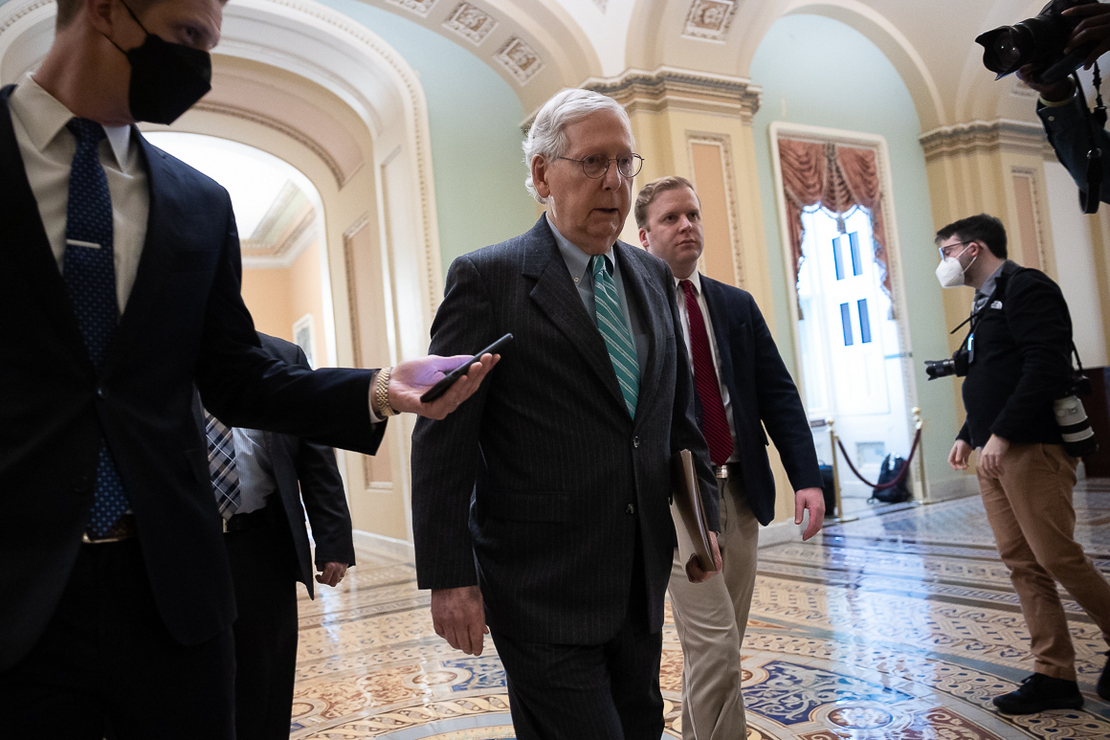 Senate Minority Leader Mitch McConnell (R-Ky.) and Environment and Public Works ranking member Shelley Moore Capito (R-W.Va.) yesterday sent a letter to the nation’s governors urging them to disregard federal guidance on how states should use funding for road and bridge projects.

The senators accused the Federal Highway Administration (FHWA) of attempting to enact a “wish list of policies” not outlined in the $1.2 trillion Infrastructure Investment and Jobs Act, which Congress passed last year with bipartisan support. Both McConnell and Capito voted in favor of the measure.

“These policies, such as discouraging projects that increase highway capacity and prioritizing projects that advance non-motorized transportation options, differ from the provisions negotiated and agreed to in the law,” they wrote in their letter. “The FHWA memorandum is an internal document, has no effect of law, and states should treat it as such.”

Last December, FHWA circulated an internal memo to state offices about how to spend the historic $110 billion in new infrastructure funding.

President Biden’s original infrastructure proposal included this fix-it-first approach, but that language did not survive Senate negotiations and the final bill does not require states to repair existing infrastructure conditions before expanding highways or building new ones.

For many transportation policy advocates, that’s a huge problem.

“It’s more important to replace dangerous bridges than to build something new.”

However, McConnell and Capito said the infrastructure law was written to provide states with the flexibility to use funding in “a manner that effectively addresses each state’s unique needs,” and the Republican senators disparaged the administration’s approach as overly prescriptive.

With the fate of Biden’s sprawling climate and spending bill, the “Build Back Better Act,” imperiled, the infrastructure law may be this administration’s best avenue for enacting chunks of its agenda. And while lawmakers on both sides of the aisle came together to pass the historic infrastructure overhaul, disagreements about how the law should be implemented are just beginning.

Democratic lawmakers are urging the administration to use the law to boost environmental justice, climate resiliency and electric vehicle deployment.

In a letter to Mitch Landrieu, who is helping the White House implement the statute, lawmakers pushed the administration to fulfill Biden’s promise to steer 40 percent of federal funding into communities of color that are shouldering the bruising effects of climate change.

“Historically, these communities have been left behind, and often lack the capacity to pursue federal funding for projects to improve their quality of life,” Reps. Nanette Diaz Barragán of California, Donald McEachin of Virginia and Pramila Jayapal of Washington wrote in the letter. The lawmakers co-chair the United for Climate and Environmental Justice Task Force.

“It’s critical for the administration to maximize the environmental and climate benefits of infrastructure funds that could mitigate or perpetuate the climate crisis and environmental inequities, depending on how they are implemented.”

The Transportation Department is expected tomorrow to release its first guidance on how states should implement the EV charging provisions outlined in the infrastructure law. The law allocates up to $7.5 billion to build out a national network of 500,000 EV charging stations.

McConnell and Capito’s rebuke mirrors a letter 16 Republican governors sent earlier this year, asking the administration to “not attempt to push a social agenda through hard infrastructure investments.”