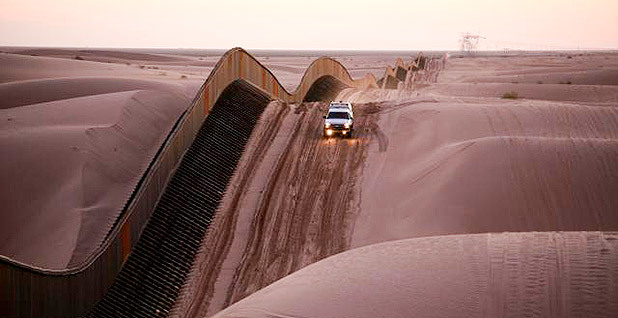 But that pitch may not sell Trump’s signature political proposal: completing a 40-foot-high concrete wall along at least half of the nearly 2,000-mile border the United States shares with Mexico.

According to the Department of Homeland Security, more than 650 miles of walls and fences — about 300 miles of vehicle barriers and 353 miles of the more well-known pedestrian fences — currently line the border. An additional 36 miles has double fencing, while 14 miles have triple-layered barriers.

Those walls are largely found in populated areas, relatively close to urban centers, with popular passages for both individuals and commerce looking to cross the border illegally.

Under Trump’s call for expanded border walls — a fixture in his stump speech that draws cheers from his Republican supporters, along with his vow to make Mexico pay for the structures estimated at $12 billion — those barriers would have to stretch into new territory: steep canyons and rugged mountains, along rivers and floodplains, and remote desert wilderness.

The challenge to build, and then monitor, the border in those areas could prove to be unprecedented, along with the eventual cost for the project — regardless of who picks up the final bill.

"You can’t even make an estimate on that because it’s not possible. It would be so astronomically costly that the American people would not want this done," said Sierra Club Borderlands Program Coordinator Dan Millis, who is based in Tucson, Ariz. Millis noted that he is not permitted to address any specific candidates or their proposals but would discuss the idea of an expanded border wall in general.

Estimates on building new sections of border fence vary widely based on the type of fence, as well as accessibility to the border itself and even maintenance needs.

According to joint testimony from a trio of U.S. Customs and Border Protection officials to the Senate in May 2015, the current 653-mile fence has cost $2.3 billion to construct.

In addition, a Congressional Research Service report published in 2009 — following the last major period of border fence construction — found that the 25-year life-cycle cost of barriers could range from $16.4 million to $70 million per mile.

The report noted that those costs would likely increase as more border fence was put in place.

"If significant portions of the border were to be fenced, reducing the areas along which individuals could cross the border, it may stand to reason that the fencing will be subjected to more breaches and other attempts to compromise than the fencing that has already been constructed," the report states.

But Millis suggests the costs could be even higher, given that much of the unfenced land — a mix of public and private property, including federal wilderness areas — is difficult terrain.

"The area is so rugged that you just don’t even want to try to build a concrete wall through there," said Millis, referring to the area west of Nogales, Ariz. "It would be costly and impractical."

During an interview with MSNBC in February, Trump allowed that the wall would only need to cover about half the border because of "natural barriers," but he has yet to offer greater detail about where his "great wall" would be positioned.

Still, natural barriers haven’t blocked construction of portions of the existing wall, most notably in an area on the border between California and Mexico known as Smuggler’s Gulch, once a highly trafficked conduit for illegal activities.

Initiated in 1996, the project — which involved filling the gulch with more than 2 million cubic yards of soil and building a 100-foot-high earthen berm — was delayed for years in court fights before the Real ID Act of 2005 allowed DHS to circumvent environmental regulations to speed construction of barriers along the border.

But with the assumption that Mexico would provide funds to pay for the construction project, Trump could find support for his border proposal in the House.

House Natural Resources Chairman Rob Bishop (R-Utah) told Greenwire there would be a role for Congress if Trump went ahead with plans for building a border wall between the United States and Mexico — particularly in waiving or working around environmental prohibitions.

"There would have to be some modification for exiting law because half that area along the border is wilderness designation already," Bishop said.

"If he goes through with it, he’s going to have to have some changes in the law to make it actually happen," said Bishop, who has fought for years to waive environmental regulations that he argues hinder the Department of Homeland Security and Customs and Border Protection agents.

"So until Congress changes some of those laws, he’s not going to be able to build it," he said.

Additionally, Bishop said, the 2009 memorandum of agreement between Customs and Border Protection (CBP) and the Interior and Agriculture departments regarding border security infrastructure and the environment needs to be updated.

That agreement included a pledge by CBP to fund up to $50 million in mitigation programs to reduce the impact of border security in sensitive areas.

Despite that memorandum of understanding among agencies, Bishop said the Fish and Wildlife Service has for the past three years been able to block the construction of CBP helicopter pads along the border over environmental concerns.

Bishop said the existing memorandum needs to be "streamlined big time" so the border patrol can be effective.

"You need to allow the border patrol to have the ability of actually doing patrolling on their schedule without being subject to a land manager’s veto of it," he added.

Senate Environment and Public Works Chairman Jim Inhofe (R-Okla.), who has endorsed Trump, disputed the idea that "serious environmental issues" would stop efforts to augment the nation’s southern border fence but said: "I do know that there’ll be a lot of partisan opposition to it."

Inhofe, who’s likely to be term-limited from leading the panel next year, said he did not see any oversight role of the wall for his committee.

However, the Oklahoma Republican conceded environmentalists are likely to renew arguments they regularly make in opposition to any large development or energy exploration.

Maryland Democratic Sen. Ben Cardin, a senior EPW Committee member who could be in line to lead the panel if his party takes control of the Senate, said Democrats are certain to raise opposition to the wall.

"A lot depends on the political landscape as to what can be done. But our principles are not going to change. We are going to do everything we can do to protect the environment," said Cardin, who said he sees a role for congressional oversight of the proposed wall.

Cardin said environmental concerns, including protecting habitat, are one of many issues that would be raised by Democrats about a wall along the Mexican border. He said broader criticisms would also be voiced by his party.

"You also have the issue of what our country stands for, and [Democrats] don’t think it stands for building a wall around our country," he added.

"If it were to be as extreme as Trump is talking about, it would be devastating environmentally, economically and culturally to the region," Grijalva added. "The borderlands would be changed for the worse."

Initial plans called for installing a mesh barrier in the river, with the idea that "water will get through" while blocking human and vehicle traffic, Grijalva said.

"Well no, the water carries debris so it plugged up. And so there you have the flow was coming off the sides, whatever is left of fish life died," Grijalva said. The river is now guarded by Normandy-style vehicle barriers during periods when water flows are low or the river is dry.

Environmentalists also raise concerns that more extensive border fencing could block the migration routes of mammals, including bears, mountain lions, deer and ocelots, as well as endangered species like jaguars.

"Part of the reason why the current wall, though incredibly damaging itself, isn’t everywhere is to provide a sort of minimal environmental mitigation," said Kieran Suckling, executive director of the Center for Biological Diversity. "Trump’s ‘super wall’ would erase all that and would be catastrophically damaging."

He added: "It’s going to shut off some of the last migration corridors for imperiled wildlife. It’s going to trash some of the rivers that cross the border that have not been trashed yet. It would be a nightmare with little impact on actual human migration."