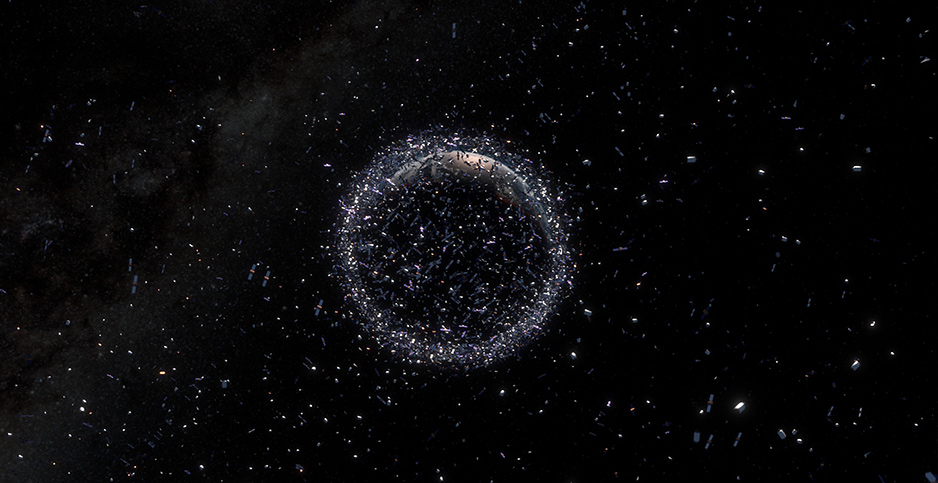 This illustration depicts space debris surrounding Earth. In about 60 years of space activities, some 8,650 satellites have been placed in orbit. European Space Agency

In February 2009, two space satellites orbiting at speeds of almost 17,000 mph collided at a height of 482 miles over Siberia.

One was an operational U.S. communications satellite, Iridium-33. The other was a heavier, obsolete Russian military satellite called Cosmos-2251. For space scientists, the collision was a rude awakening to a worrisome kind of new math.

The ultra-high-speed collision turned two space orbiters in a cloud of debris with 2,300 objects. That made other scientists — climate scientists — take note, because changes in the upper atmosphere stand to increase the risk of space collisions. There are currently 21,000 pieces of trackable space debris, ranging in size from upper stages of old rockets to dime-sized chunks of metal.

As Martin Mlynczak, a senior scientist at NASA’s Langley Research Center in Hampton, Va., recently described it, the buildup of carbon dioxide emissions aloft is gradually cooling a layer of the upper atmosphere where satellites frequently orbit. The good news is that the cooling will make the air there less dense, and that could prolong the life of existing satellites. The bad news is that it will preserve rapidly accumulating space junk that might otherwise sink into the lower atmosphere and burn up.

A study by the European Space Agency (ESA) has described the problem more bluntly: "A ‘business as usual scenario’ will lead to a progressive, uncontrolled increase of object numbers in LEO (low earth orbit), with collisions becoming the primary debris source."

The agency proposes to begin to avoid this problem in 2023 by removing potential pieces of debris from its space vehicles.

"The [upper] atmosphere is cooling. We know that," Mlynczak explained in an interview. "We need to know the density change over the next 50 to 100 years to keep space habitable for people and satellites."

The United States has become highly dependent on space satellites for communications, Earth observations, military needs, navigation, weather forecasting and a host of other uses. That’s why satellite launches, especially those carrying recent clusters of "cubesat" vehicles, roughly the size of half-gallon milk cartons, are proliferating every year.

An Indian-made rocket called PSLV-C37 launched 104 of these satellites in February 2017, spitting them out rapidly from vents in both sides. It was a world record for India and a milestone for U.S. companies and institutions, which built 96 of the orbiters (Climatewire, Jan. 29).

More destructive collisions that cripple satellites could result in lost information for science and the military. It would also mean greater costs for commercial users of satellites, affecting consumers, satellite owners and companies that insure expensive satellites, Mlynczak explained to a group of scientists at the National Center for Atmospheric Research in Boulder, Colo.

In space, the velocity of even tiny orbiting objects can cause substantial damage. According to the ESA, the impact of a piece of debris with a 10-centimeter diameter, roughly the size of a softball, "will most likely entail a catastrophic disintegration of the target."

The ESA reported that in 2016, the solar panel of a major European satellite, Sentinel-1A, was nearly destroyed, crippling its power supply. The object that hit it had a 1-centimeter diameter, a dime-sized piece of space junk.

In all, according to the ESA, there have been about 5,400 rocket launches since the space age began in 1957. They have placed about 8,650 satellites in orbit. Of these, about 4,700 are still in space, but only around 1,800 are still functioning. Space surveillance networks operated by the United States, Europe and other nations now estimate there are some 29,000 pieces of debris that are 10 centimeters in diameter or larger in orbit. Not all of them are being tracked.

So far, the ESA estimates there have been more than 500 breakups, collisions or "anomalous events resulting in fragmentation." The total weight of all objects now in orbit amounts to some 8,100 metric tons. With the increase of launches, currently estimated at 70 to 90 each year, it says "the probability of catastrophic collisions will also grow in a progressive manner."

NASA and space agencies of some other nations have approved rules that attempt to limit the projected damage by requiring that new orbiting vehicles live a maximum of 25 years. After that, they must have orbits or thrusters that tip them into what are called "graveyard disposal orbits," where most of them will burn up.

So far, according to the ESA, statistics show there have been "poor results" and that long-term proliferation of space junk is still likely, even if the rule is observed worldwide. Both NASA and the ESA have done studies of how they might conduct annual "active debris removal" with space missions that steer five to 10 of the most dangerous pieces of orbiting debris into the "graveyard" path.

The ESA plans to start its "CleanSpace initiative" by removing one of its orbiting objects in 2023. It estimates that there are risks of a large piece of space debris failing to burn up completely in the lower atmosphere, but they are "several orders of magnitude smaller than commonly accepted risks faced in daily life." So far, there have been no known human casualties.

According to Mlynczak, precisely locating and physically removing orbiting objects is complicated by solar storms. They can cause variations in the Earth’s magnetic field and changes in the density of the upper atmosphere, he said, "making it more difficult to track objects during two- or three-day intervals."

It appears, however, that the Earth is heading into a period where solar activity is weakening, and that, Mlynczak said, "may give you an opportunity to do something here." New satellite systems could help track orbiting objects and provide better estimates of the long-term density reductions being caused by more carbon dioxide accumulating in the upper atmosphere.

"But it is a technology challenge to develop small, low-cost sensors that could be routinely orbited over long periods to develop the accurate record needed to reliably forecast the long-term density changes. This should be an active area of technology investment and research," Mlynczak said.

The most critical measure needed, he said, will be an accurate stream of data that allows space agencies to project the declining density of the upper atmosphere, where satellites and debris will be orbiting in the next 50 to 100 years. That’s one more dimension to the overall costs of rising CO2 levels.