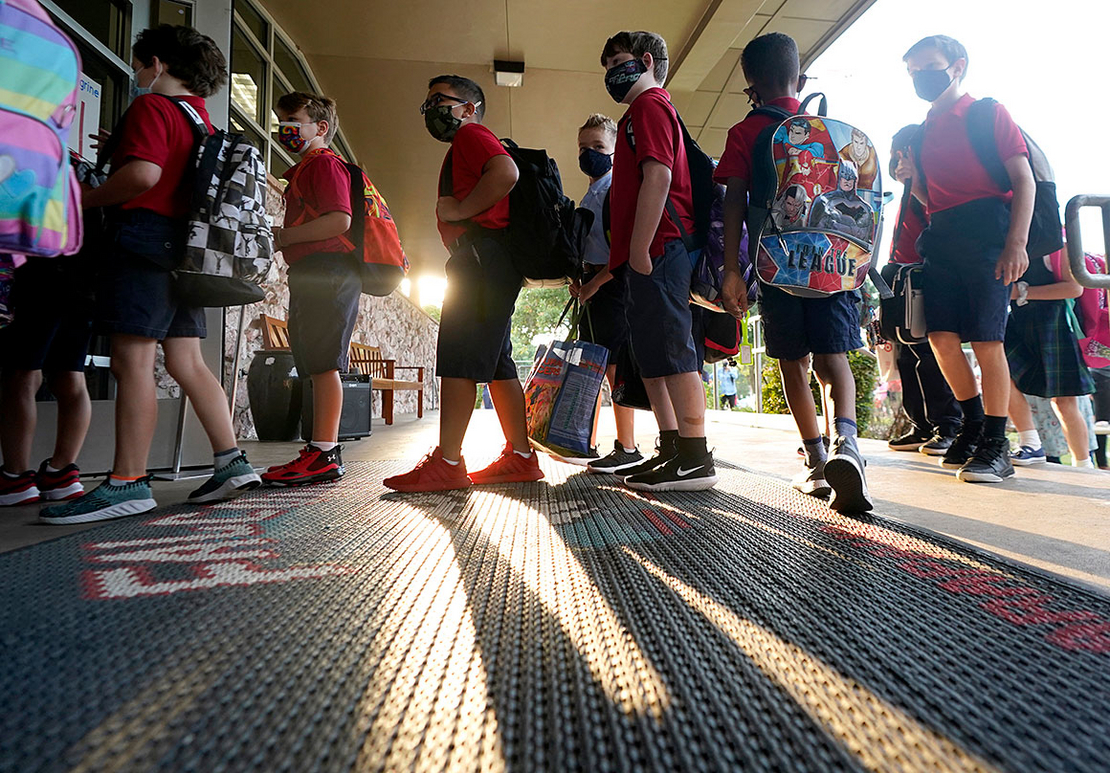 With students returning to the classroom amid the pandemic, increased focus has been placed on indoor air quality at schools. LM Otero, File/AP Photo

As students head back to school amid a surge in coronavirus cases — even among children — indoor air quality experts fear school districts could be buying unproven technology in hopes of combating the virus, and possibly emitting harmful pollutants instead.

At issue are devices such as needlepoint bipolar ionizers, which send positive and negative ions through air ducts. The ions act like magnets, attracting airborne particles and clumping them together so that they either fall to the ground or are easier for filters to catch.

Companies that market the devices claim they achieve 99% viral reduction, but independent experts who have studied the technology have found it doesn’t have nearly that same success rate in real-world classrooms.

At the same time, independent testing of some devices has found they emit harmful byproducts like volatile organic compounds and even ozone, a gas that irritates breathing and is a component of smog.

For that reason, the Centers for Disease Control and Prevention encourages ventilation and filtration instead, telling consumers to “exercise caution and do their homework” before purchasing needlepoint bipolar ionizers and similar air cleaners, like those that use oxidation to clean the air.

Other nations have gone further, with the Spanish Ministry of Science and Innovation saying in a recent report that “public funds should not be used” on technology that uses ions, oxidation or other unproven technology to clean the air. California, too, has banned selected devices known to produce ozone.

Some of the oxidizing air cleaners manufactured by ActivePure Technology, which Birx joined, have been shown to emit ozone and thus cannot be sold in California.

The company did not respond to E&E News’ request for comment but told but told Kaiser Health News in March that air cleaners that emit ozone account for 5% of the company’s nearly $500 million in annual sales.

Birx also told the news service that “the concerns you have raised are legitimate” for other companies selling the technology, but said she had confidence in ActivePure.

Of course, this isn’t the first school year in which districts will have to contend with the coronavirus as they educate students in person. But it is the first full academic year since the CDC acknowledged that the coronavirus is unlikely to spread on surfaces. So schools that had been investing in extra cleaning products are now being told to focus on air transmission.

At the same time, school districts have seen a boost in federal cash from congressional coronavirus relief packages — with the American Rescue Plan alone including an additional $122 billion in school aid.

There’s no official tally of how many schools have invested in such technology, but Marwa Zaatari, who sits on the board of the nonprofit U.S. Green Building Council, has kept a spreadsheet of news reports about the devices and estimates school districts have spent at least $100 million on the technology.

Zaatari blames the CDC for not taking a stronger stance against the technology, noting that school administrators are ill-equipped to assess such new technology, especially in the face of swanky marketing campaigns.

“It really is the Wild West,” she said.

The CDC did not respond to requests for comment.

Jeffrey Siegel, a professor of civil engineering at the University of Toronto who has studied the devices, says they don’t all emit harmful byproducts. But most of them aren’t proven to be effective against the coronavirus, either.

“I would estimate about three-fourths of the market is what I call illegitimate devices that are unproven in real environments,” he said. “In general, they are not harmful, but they aren’t particularly helpful, either.”

What’s more concerning to Siegel is that schools may be spending their money on unproven technology rather than tried and true means of cleaning the air: ventilation and filtration.

Indoor air quality experts and the CDC alike have urged schools to combat the coronavirus by increasing the flow of outdoor air into their buildings and updating heating, ventilation and filtration (HVAC) system filters to something called MERV13. When upgrading HVAC systems isn’t possible, or when school buildings are too old to even have air ducts, they are being told to use HEPA filters in classrooms.

Both MERV13 and HEPA filters would help trap not just the coronavirus but also particulate matter or fine airborne dust or soot.

“When we think about big wildfire smoke events, which we are having more and more frequently, smoke events increase air pollution outside, and that just permeates the indoor air,” said Delphine Farmer, an atmospheric chemist at Colorado State University. “One of the best things you can do in that scenario is to increase your HVAC filter or bring in classroom HEPA filters.”

Though the coronavirus is rightly receiving school administrators’ attention right now, Farmer said, “improving ventilation and filtration in school buildings will have positive impacts down the line when we move into the future.”

“They are absolute win-win scenarios,” she said.

Before the pandemic, facilities upgrades were among the lowest priorities for school districts, behind academics and security concerns, even though research has shown that indoor air pollution contributes to lower test scores.

A 2020 report from the Government Accountability Office found that an estimated 41% of school districts needed to replace their HVAC systems — amounting to 36,000 schools with indoor air problems. Those could include too much particulate matter coming in from the outside, as well as an accumulation of carbon dioxide from students exhaling in stuffy classrooms.

One Florida school the GAO visited before the pandemic had installed new cameras as part of an updated security system, even as its HVAC system was in such disrepair that maintenance staff had to climb to the roof every day to adjust the air conditioning.

Zaatari says improving HVAC systems and filters could help protect students from COVID-19, as well as pollution from wildfires and traffic. She noted that the outdoor air intakes for HVAC systems at urban schools are often located near bus stops and can suck in exhaust gases. Schools are generally also located near highways and other main thoroughfares — hot spots of traffic pollution.

“When we talk about the filters now, people think about it being for COVID in the indoor air that gets recirculated, but it’s also good to filter the outdoor air,” she said.

Anisa Heming, director of the Center for Green Schools, said she is concerned that schools purchasing unproven bipolar ionization devices are missing a huge opportunity to make much-needed improvements to HVAC systems.

“The thing that is really killing me about it is that we do have strategies that are actually very well proven at cleaning air from all sorts of threats,” she said. “It is upsetting that people are missing the chance to invest in them.”