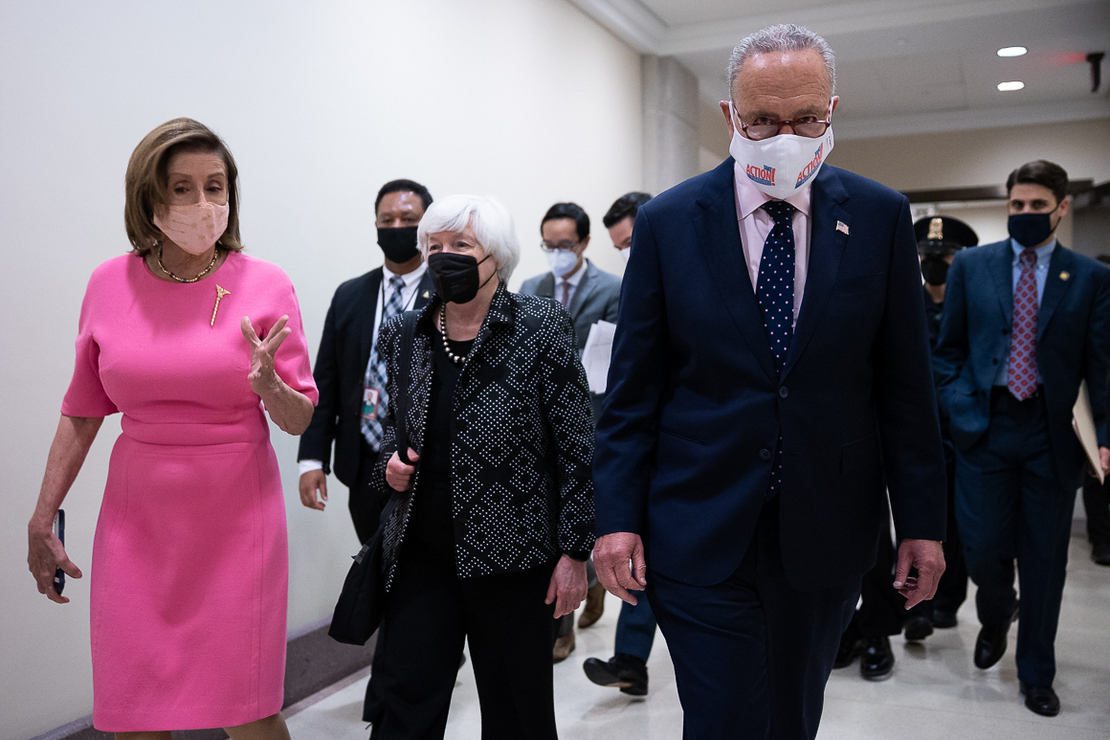 Senate Majority Leader Chuck Schumer (D-N.Y.) said this morning that the Biden administration and key congressional Democrats have agreed to a menu of options to pay for the budget reconciliation package — an assertion that caught key senators off guard.

“The White House, the House and the Senate have reached an agreement on a framework that will pay for any final negotiated agreement,” Schumer said during a brief appearance with Treasury Secretary Janet Yellen at the start of House Speaker Nancy Pelosi’s weekly press conference. “So the revenue side of this, we have an agreement on.”

Neither he nor the California Democrat offered additional details of the plan, and Pelosi declined to address whether the agreement includes a top-line spending figure — a key point of contention in the ongoing intraparty feud between moderates and liberals that threatens President Biden’s sweeping infrastructure agenda.

Democrats are anxious for signs of unity within the party ahead of a planned Monday vote on the Senate-passed bipartisan infrastructure deal. Progressives are threatening to sink that bill unless the broader reconciliation bill is passed simultaneously. A series of White House meetings yesterday appeared to do little to resolve the fight (E&E Daily, Sept. 23).

Schumer later told reporters that a meeting that included he, Pelosi, Yellen, White House officials, House Ways and Means Chair Richard Neal (D-Mass.), and Senate Finance Chair Ron Wyden (D-Ore.) had yielded a deal on “options that will pay for any negotiated agreement.”

“This is an important step,” he said, sidestepping a question on the timing of a possible vote. “There will be enough pay for us to pay for the final agreement. It will be paid for.”

However, it was unclear what exactly was new on the thorny question of pay-fors, which has dogged reconciliation negotiations from the start.

Senate Budget Chair Bernie Sanders (I-Vt.) — who is central to the reconciliation push — was caught off guard by Schumer’s statement and downplayed its significance.

“I have no idea what the so-called framework is,” he told reporters this morning. “We’ve been through this a million times … there are many, many approaches as to how you can raise money, aggressively and raise at least $3.5 trillion.” A menu of pay-fors is “nothing particularly new,” Sanders added.

Wyden declined to offer additional details of the framework this morning. While Neal’s committee has approved a reconciliation package that would hike tax rates on corporations and the wealthy — as well as target the overseas drilling profits of oil and gas companies — Wyden’s plans are less clear. He has released multiple draft proposals of potential pay-fors but has not definitively said which ones will make the cut.