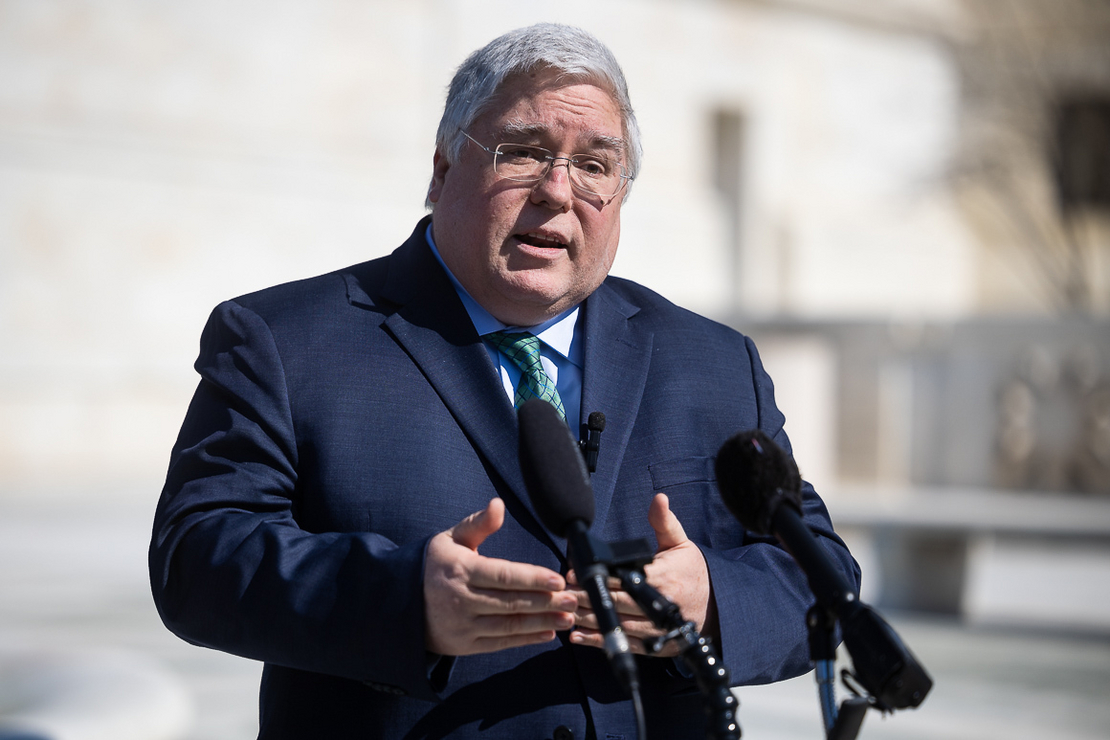 The Supreme Court yesterday signaled interest in curbing EPA’s role in tackling climate change — just hours after a major scientific report warned that the damaging effects of a warming planet will be worse than previously predicted and that governments aren’t doing enough.

In what could be the most important environmental case in decades, the justices yesterday appeared sympathetic to claims from Republican-led states and coal industry interests that EPA has limited authority under the Clean Air Act to regulate carbon emissions from existing power plants (Greenwire, Feb. 28).

Arguments in the case, West Virginia v. EPA, coincided with the release of a landmark U.N. Intergovernmental Panel on Climate Change report, which U.N. Secretary-General António Guterres called an “atlas of human suffering and a damning indictment of failed climate leadership” (Climatewire, Feb. 28).

“It was grotesque to hear Big Coal’s lawyers argue for tying EPA’s hands on cutting climate-heating pollution, even as the world’s scientists warn of a bigger, worsening swath of human suffering,” said Jason Rylander, an attorney at the Center for Biological Diversity’s Climate Law Institute, which had urged the Supreme Court to uphold EPA’s authority.

The fight at the heart of the West Virginia dispute spans three presidencies: In 2015, President Obama imposed the Clean Power Plan that challengers argue would have unlawfully required companies to shift to renewables. That regulation, which never formally took effect, was gutted by the Trump-era Affordable Clean Energy rule in 2019. The U.S. Court of Appeals for the District of Columbia Circuit tossed the Trump rule last January, prompting the challenge that is now before the Supreme Court.

Although the Biden administration’s EPA has said it plans to issue a new carbon rule, coal companies and red states called on the Supreme Court to take the unusual step of getting involved before the regulation is finalized — and the justices agreed.

“You are claiming that the interpretation gives you the authority to set industrial policy and energy policy and balance such things as jobs, economic impact, the potentially catastrophic effects of climate change as well as costs,” Alito said.

Prelogar disputed his interpretation, saying there were limits to what EPA could accomplish, noting it could not impose “unreasonable costs on the industry,” nor threaten the reliability of the electricity grid.

“I really don’t see what the concrete limitations are in any of what you said,” he said. “If you take the arguments about climate change seriously, and this is a matter of survival, so long as the system that you devise doesn’t mean that there isn’t going to be electricity, and so long as the costs are not absolutely crushing for the society, I don’t know why EPA can’t go even a lot further than it did in the” Clean Power Plan.

‘Congress needs to settle it’

Outside the Supreme Court yesterday, West Virginia Attorney General Patrick Morrisey (R) warned that aggressive EPA regulation would cripple his state and called on Congress to get involved.

West Virginia — which led the Supreme Court challenge yesterday — is bringing its case as the state and 17 others fighting EPA had 641 extreme weather events over the past decade that caused $1 billion or more in damages, according to Dan Weiss, a longtime environmental consultant, who cited data from the National Centers for Environmental Information.

“Whatever your position is on the major question of climate change, Congress needs to settle it as opposed to unaccountable agencies,” Morrisey said.

During arguments, it was unclear whether a majority of the justices were swayed by the attempt by West Virginia and others to invoke the major questions doctrine to argue that EPA could not regulate matters — like climate change — that are of “vast economic and political significance” without clear congressional authority.

The court this year used that doctrine to block the Occupational Safety and Health Administration from imposing a Covid-19 vaccine-or-test mandate, and observers said they feared a similarly adverse ruling in the fight over power plant pollution controls would set back efforts to address global warming.

A broad Supreme Court decision “could severely limit agency authority to respond to environmental and public health threats across the board,” said Pat Parenteau, a professor at Vermont Law School. He added that “even a less sweeping decision will almost certainly curtail the EPA’s ability to reduce greenhouse gas emissions from power plants,” which he noted account for a quarter of U.S. emissions.

“It would make it extremely difficult — if not impossible — to achieve the pledges we have made under the Paris Agreement, and that would reduce pressure on China and India to reduce their emissions,” Parenteau said.

Biden’s most aggressive efforts to tackle climate change have largely been stymied by Congress. A national clean electricity standard to move utilities away from fossil fuels was dropped months ago, and a spending package that would invest in green energy has languished on the Hill.

Liberal members of the Supreme Court said EPA is already operating with constraints, noting the Clean Air Act requires the agency to consider costs and other factors.

“This is not a kind of ‘regulate to the end of the world’ kind of statute,” said Justice Elena Kagan. “It very clearly says that there are other constraints that have to be considered to impose reasonable limits.”

She added: “If EPA is looking at the national or gridwide level and if it’s dealing with an issue as massive as climate change, it’s hard to see what costs wouldn’t be justified.”

‘A lot of confusion’

Legal analysts said they continue to be surprised by the Supreme Court’s decision to take up the West Virginia case in the first place, given that there is no EPA carbon rule in effect.

Supporters of a broad EPA rule have also noted that the power sector has met the goals of the Clean Power Plan more than a decade early, even though the rule never officially took effect.

Arguments that the case was not ripe, however, did not appear to sway the justices yesterday.

“As the U.S. solicitor general explained, there’s currently no regulation in place that puts costs on any petitioner,” said Dena Adler, a research scholar at the Institute for Policy Integrity at New York University’s School of Law who works on federal climate and energy policy. “The Clean Power Plan did not spring to life after the most recent decision in this case. Given the absence of any current regulation, it would make sense to dismiss the case as improvidently granted.”

“It’s pretty clear they don’t know what they’re reviewing,” he said. “There was a lot of confusion about what it is exactly that’s before them.”

Still, he said it seemed that some of the conservative justices view the West Virginia case as raising a “major question” that would require explicit instructions from Congress. The term itself was used nearly 60 times in two hours of debate.

“It’s a very scary move because it lends itself to ideological decisionmaking,” Driesen said of the major questions doctrine. “If you’re anti-regulatory, you’re going to imagine that the agency will be unreasonable in the future.

“It’s supposed to be that there’s a final rule to be compared to statute,” he continued. “But this court is so anti-regulatory that it’s moving away from that framework.”