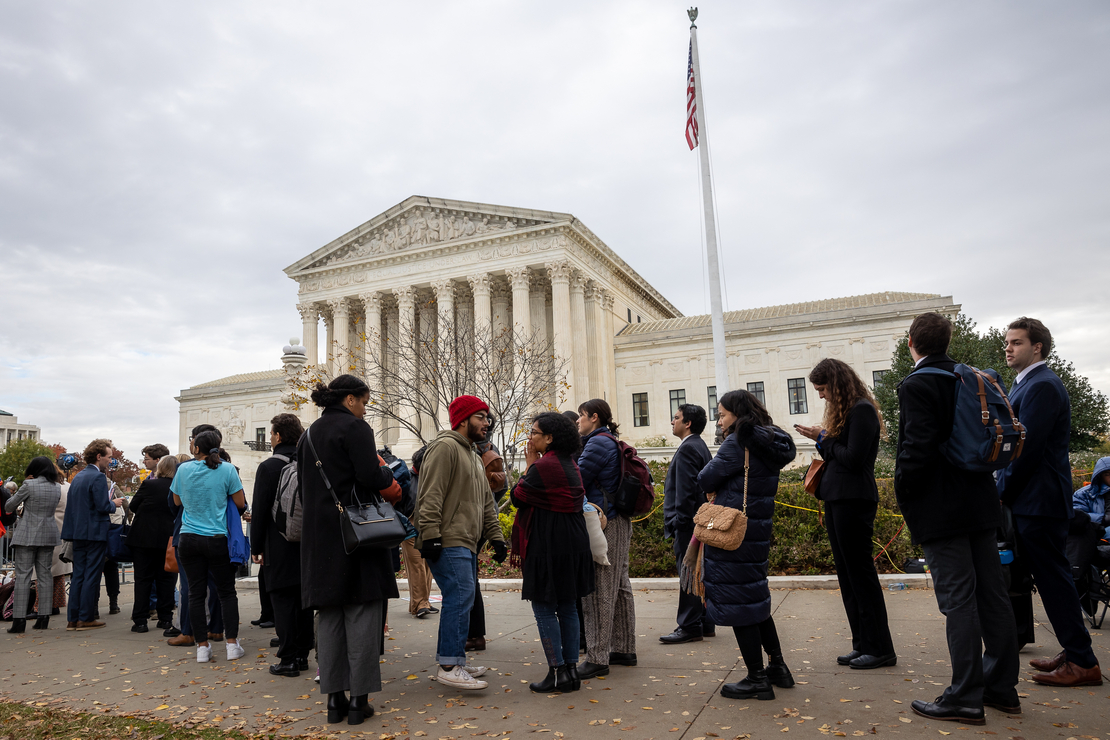 Members of the public wait in line Monday at the Supreme Court to attend oral arguments on two cases on whether colleges and universities can continue to consider race as a factor in admissions decisions. Francis Chung/E&E News/POLITICO

The Supreme Court on Monday seemed sympathetic to arguments for “race-neutral” policies in college admissions decisions — and their ruling could be a stumbling block for President Joe Biden’s goal to remedy Black communities’ disproportionate exposure to pollution.

During oral arguments, some of the most moderate members of the six-justice conservative wing pondered the extent to which race-neutral considerations — such as socioeconomic factors and cultural struggles — could be used to achieve schools’ diversity goals.

“Do you think those are appropriate, even if the attempt in adopting them is to reach minority students?” Chief Justice John Roberts asked Patrick Strawbridge, a partner at the firm Consovoy McCarthy PLLC representing the anti-affirmative action group Students for Fair Admissions.

Legal observers note that a ruling endorsing race-neutral approaches could dilute efforts to admit students from underrepresented groups. Depending how broadly the opinion is written, it could also undermine one of Biden’s marquee campaign promises to address disproportionate pollution and climate impacts in Black neighborhoods (Greenwire, Oct. 28).

Biden’s White House Council on Environmental Quality drew backlash after it unveiled a new screening tool to identify disadvantaged communities for extra federal investment and left out race as a factor.

The tool instead focused on factors like pollution-linked health issues and low income (Climatewire, June 1).

Conservative justices also pressed an attorney for the University of North Carolina, Chapel Hill, for a deadline by which “race-conscious” admissions decision would no longer be necessary to ensure diversity on college campuses.

The time element is a key argument for Students for Fair Admissions, which claims that former Justice Sandra Day O’Connor appeared to put a 25-year “self-destruct mechanism” in her 2003 opinion in Grutter v. Bollinger that said colleges could consider race as one of many factors in admissions decisions.

“We expect that 25 years from now, the use of racial preferences will no longer be necessary to further the interest approved today,” O’Connor wrote at the time.

Justice Brett Kavanaugh asked Strawbridge how the court should “think about that sentence” in Grutter.

Strawbridge replied that his group — which argues that affirmative action policies harm Asian American and white students — doesn’t understand 25 years to be a “hard and fast” requirement.

Park said that UNC is constantly reassessing its race-conscious admissions policies and monitoring whether the school is ready for a more neutral approach.

“It’s a dial,” he said in response to questioning from Justice Amy Coney Barrett, “not a switch.”

David Hinojosa of the Lawyers’ Committee for Civil Rights Under Law and U.S. Solicitor General Elizabeth Prelogar argued alongside Park.

Liberal justices grilled Strawbridge about the potential harm of stifling Black and Native American students from focusing on their racial identity in their applications, but allowing, for instance, native North Carolinians to tout their families’ histories in the Tar Heel State.

“What I’m worried about is that seems to me to have more of an equal protection issue than the problem it is actually solving,” Justice Ketanji Brown Jackson said to Strawbridge.

Arguments in the Harvard case will take place Monday afternoon.