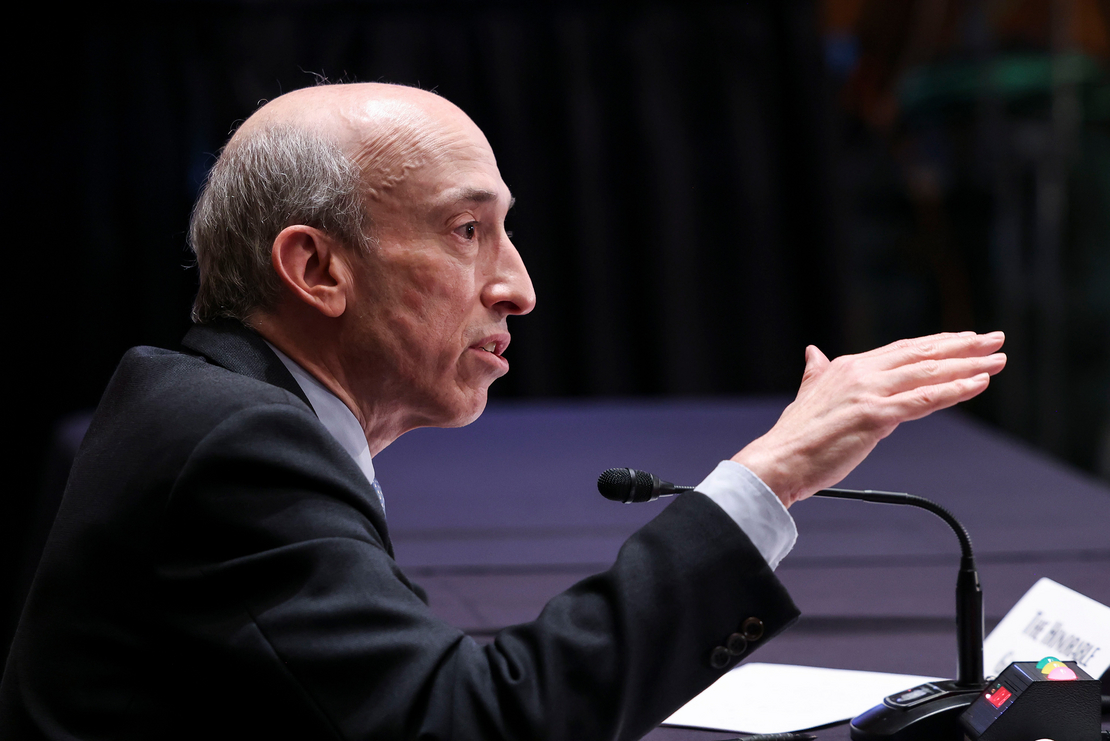 Gary Gensler, chair of the Securities and Exchange Commission, testifying in the Senate in September. Evelyn Hockstein-Pool/Getty Images

A wonky climate proposal by the Securities and Exchange Commission has caught the attention of powerful lobbying associations, climate groups, academics, egg farmers — and even a climate-finance-concerned high school student.

The SEC proposed the landmark rule in March, kick-starting U.S. efforts to shield the financial system from climate-fueled threats. If finalized, the rule would for the first time require publicly listed companies to disclose to investors, regulators and the public their risks from — and contributions to — global warming.

The proposal’s three-month comment period on the nearly 500-page rule ends today. Already, more than 8,000 comments from a wide range of organizations and individuals have been posted to the SEC website. More letters, including from influential trade groups and companies, will be posted in the coming days from those who waited until the last minute to respond.

But the comments that already have been published make clear where different types of organizations will likely fall on the rule’s most controversial provisions — and the tough road ahead for the SEC as it forges the final version.

Observers say the comments are critical because they offer a snapshot into how opponents might challenge the rule in the courts down the road and what evidence the agency will have in its arsenal to defend itself.

“Our goal is to see this rule implemented. And therefore our efforts went toward ways to show this rule is perfectly within the SEC’s mandate,” said Tracey Lewis, who serves as policy counsel at Public Citizen, a progressive group.

So what would the rule do? And why is it so controversial?

The rule as currently proposed would apply only to publicly listed companies. It would ask them to infuse their SEC filings with climate-related information, including additional details about their long-term climate strategies and ongoing efforts to address potential climate risks and greenhouse gas emissions.

At a high level, comments from sustainable finance experts, green groups, and some major companies and investors seem to agree that the proposal is well within the SEC’s remit and would provide markets with much-needed information about public companies’ exposure to climate-fueled threats.

Harvard University’s John Coates, who formerly served as general counsel for the SEC, argued in his comment that because the rule is focused squarely on the issue of disclosure, it falls within the agency’s jurisdiction.

“It does not regulate climate activity itself (e.g., greenhouse gas emissions) and would have modest effects on the economy as a whole. It is authorized by clear statutes, is consistent with settled understandings, and addresses disclosure topics covered by rules adopted long ago by the Commission and ratified by Congress,” Coates wrote.

While many companies already provide some climate-related disclosure on a voluntary basis, proponents say a formal rule is necessary to ensure that information is consistent, reliable and can actually be used by investors to make financial decisions.

Business groups and some lawmakers, meanwhile, have argued that the SEC and other financial regulators should stay out of environmental issues altogether and that the rule is unnecessary. Sen. Joe Manchin (D-W.Va.) is among them. He noted in a comment letter that the SEC acknowledges many companies already disclose climate-related information and said “one could argue that the proposed rule aims to solve a problem that does not exist.”

Opponents also say the proposed rule would be overly burdensome and could run some companies — including fossil fuel producers — out of business. They hinge that critique on perhaps the most controversial provision of the proposal, which would require companies to measure and report the emissions associated not only with their operations and electricity use, but also their supply chains and customers in some instances (Climatewire, June 2).

Groups including the American Farm Bureau Federation and the Heritage Foundation, a conservative think tank, argue that the requirement could result in companies asking small, private companies that are in their supply chains — but aren’t regulated by the SEC — to cough up emissions data.

Others say the greenhouse gas emissions requirement is among the proposal’s most important — and could even be strengthened. The resulting data, they argue, would yield a clear picture of how certain companies, particularly carbon-intensive ones, would fare amid the transition to a low-carbon economy.

Among their ranks is Anne Sullivan, a high school student at Virginia’s Alexandria City High School. In a comment letter, Sullivan said that while working on a science fair project about pollution and the oil and gas industry, one of the main challenges was that there is “no consistent and reliable source for emissions data.”

“I urge the Commission to promptly adopt its proposal, along with a rigorous implementation timeframe,” Sullivan wrote. “This is particularly true for Scope 3 emissions data, which is essential to provide an accurate assessment of a company’s pollution.”

Once the comment period is officially closed, the SEC will review the letters before releasing a final rule.