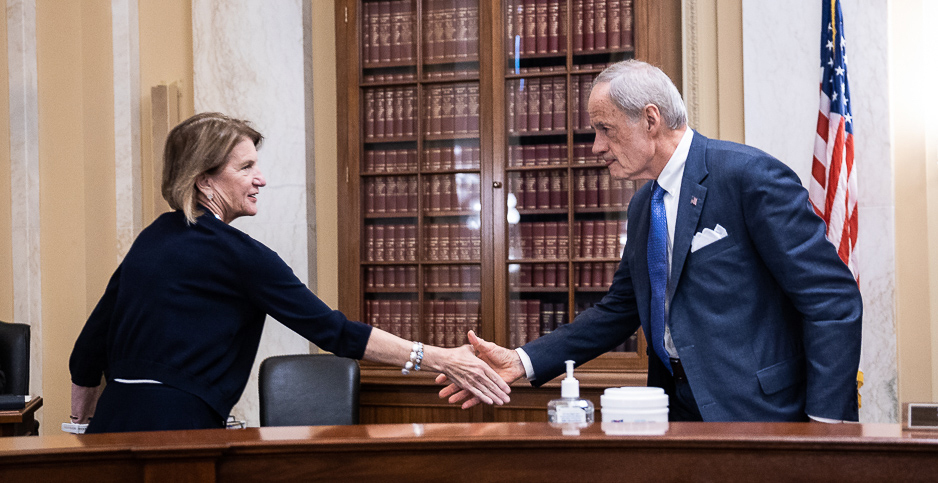 Despite that friction, the "Surface Transportation Reauthorization Act" passed on a bipartisan 20-0 vote after the Senate Environment and Public Works Committee incorporated about 90 additional provisions to the bill.

EPW Chair Tom Carper (D-Del.), who authored the measure with ranking member Shelley Moore Capito (R-W.Va.), said the reauthorization bill is an example of what can be accomplished on a bipartisan basis.

"I’m proud that our bill focuses on these critical issues of climate, safety and equity, and does so in a bipartisan way that will put our transportation programs on the right track for the next five years," Carper said during his opening remarks.

The measure, which now heads to the Senate floor, would authorize $350 billion over five years to upgrade the nation’s highways, roads and bridges.

The proposal invests $18 billion for climate programs, including $6.4 billion to reduce greenhouse gas emissions and $8.7 billion to increase resilience to climate change and extreme weather.

The measure would also put $500 million to mitigate climate impacts on communities of color, tribes and other vulnerable communities.

The proposal includes $2.5 billion for alternative fuel corridors along the national highway system and to build out electric vehicle charging infrastructure across the country.

The Markey-Sullivan amendment, which passed 11-9, would invest additional funds to connect neighborhoods and communities with walking and biking avenues, cutting down car travel.

Captio opposed the measure for several reasons, though not because she’s "anti-bike or pedestrian trails" but rather because the legislation already directs $7.2 billion for alternative transportation projects.

Sen. Tammy Duckworth (D-Ill.), however, urged her colleagues to vote in favor of the provision, which she said would help people with disabilities and aging people travel more easily.

"If we just depend on existing transportation infrastructure, it’s never quite enough," she said. "Having something like this [amendment] would actually allow persons with disabilities greater freedom, greater access, which is going to be ever more relevant as our baby boomers age."

While the bill has been embraced by an array of interest groups — including the Theodore Roosevelt Conservation Partnership — a number of environmental and progressive organizations say the measure doesn’t go far enough and could undermine public input and environmental reviews.

"The Surface Transportation Reauthorization Act fails to deliver on the bold investments needed to build a sustainable infrastructure, create jobs, and address the climate crisis," Nicole Ghio, Friends of the Earth’s senior fossil fuels program manager, said in a statement calling on Senate Democrats to reject the measure.

"Passing this inadequate legislation would shortchange communities and hinder our ability to build a sustainable future," Ghio said.

Groups also took issue with a provision in the bill that would codify former President Trump’s "One Federal Decision" executive order, which aimed to streamline the permitting process for infrastructure projects.

"[W]e are deeply disappointed that this bill doubles down on the demonstrably false narrative that public input and environmental regulation under the National Environmental Policy Act (NEPA) stand in the way of critical infrastructure," Stephen Schima, senior legislative counsel at Earthjustice, said in a statement.

"If we are to implement a surface transportation program that seeks to meet the challenges of the climate crisis and address the historical environmental injustices plaguing transportation infrastructure, then we cannot afford further rollbacks" to NEPA.

Capito, however, said the streamlined approach, which aims to complete environmental reviews in two years, would improve the project delivery process and "provide more accountability to the environmental review and permitting process by including page limits" and other measures.

This tension is reflected in the wider infrastructure debate, which is becoming increasingly taut as progressive Democrats are losing patience with the back-and-forth offers between the White House and Senate Republicans (E&E Daily, May 26).

Some Democratic senators see the talks between Biden and the GOP a way to show that the party is making a good-faith effort to work with Republicans, but others fear it will lead to a missed opportunity to pump trillions of dollars into climate change policy and infrastructure.