Senate in no rush after House passes more pandemic relief 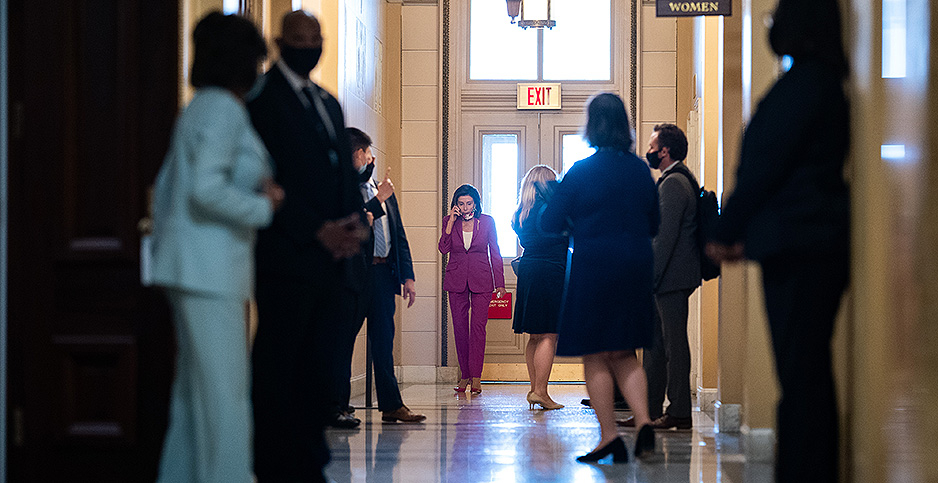 Congressional Democrats are calling for talks on additional pandemic stimulus after the House passed $3 trillion more Friday, but Republicans continue to resist a rush to legislate more COVID-19 relief.

House Speaker Nancy Pelosi (D-Calif.) yesterday rejected the GOP’s push to assess the effectiveness of the more than $3 trillion already enacted to stem the pandemic’s health and economic fallout before launching new negotiations.

"Time is of the essence," Pelosi said on CBS’s "Face the Nation." "They may think it’s OK to pause. Well, people are hungry across America. Hunger doesn’t take a pause. People are jobless across America."

However, Pelosi cracked the door to a key GOP demand in the next stimulus package: liability protection for businesses and local governments for decisions made through the pandemic.

"We have no red lines," she said on CBS.

She went on to suggest, however, that mandatory federal guidelines contained in the "Health and Economic Recovery Omnibus Emergency Solutions (HEROES) Act" passed Friday in the House would reduce the need for liability protection, which Republicans are insisting on.

But Capitol Hill Republicans so far have refused to be dragged into another negotiation on pandemic relief, with Senate Majority Leader Mitch McConnell (R-Ky.) slamming the House Democrats’ bill as a "totally unserious effort" and a "Democratic wish list."

He declined to offer a timeline, but said there should be hearings on needs and efforts to reopen society. "States are beginning to open up," McCarthy said.

The package did not include clean energy provisions desperately sought by advocates, but the issue is likely to resurface as talks get underway (E&E Daily, May 14).

The legislation did have some energy- and environment-related priorities, including biofuels and agriculture aid and help for people with water and power bills (E&E Daily, May 13).

Fourteen House Democrats voted against the "HEROES Act," which passed 208-199. Critics included moderates, worried about the size of the package and lack of more deliberations, and progressives, who wanted more provisions.

Outlook next week, ahead

Even as the two parties spar over the need for more stimulus, the two chambers are also at odds over legislating during a pandemic.

The Senate is expected to adjourn for the Memorial Day recess this week without unveiling a counteroffer to the "HEROES Act."

The House will be back May 27 and 28. Majority Leader Steny Hoyer (D-Md.) said on the floor that the chamber would consider Senate-passed national security legislation. Pandemic-related measures could also come up.

The House on Friday voted largely along party lines to temporarily allow proxy voting on the floor and in committees during the pandemic (E&E Daily, May 14).

Hoyer said next week would give aides a chance to review those changes and "determine exactly how the new rules can be carried out."

He said the House was looking forward to "getting product" from committees that can pass on the floor, including water resources, defense, highway and spending bills.