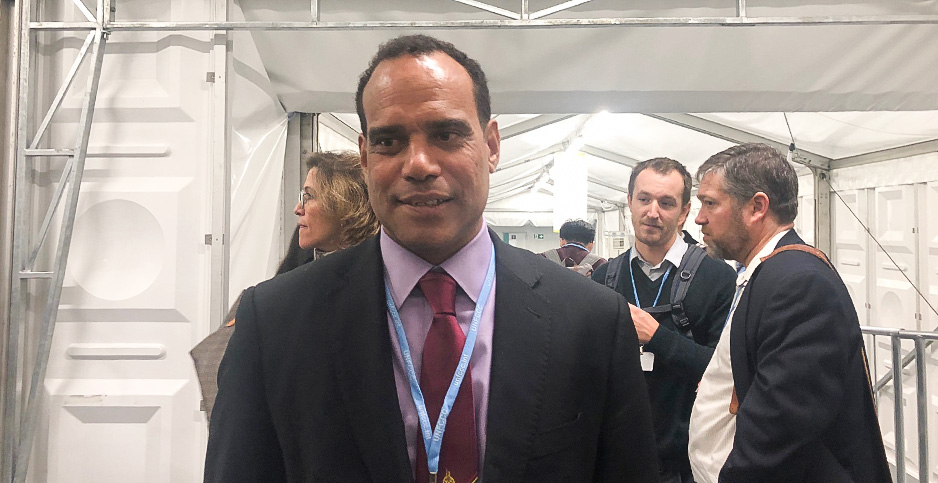 Ralph Regenvanu, foreign affairs minister of Vanuatu, says the world has to act faster to save his island nation. Jean Chemnick/E&E News

Earth’s smallest countries issued a list of demands today as U.N. climate talks move into the final stage in this historical coal town.

The Small Island Developing States, or SIDS, have a list of items they say the world must back them up on when talks close Friday or Saturday.

Ralph Regenvanu, foreign affairs minister for tiny Vanuatu, told reporters that the future of the U.N. climate process could hang in the balance.

"We were relying on Paris and the commitments that were made there, which are now not being met," he said.

If that remains true by the end of the week, he said, islands like his own might need to turn to litigation or international tribunals in hopes of compelling the world to help them bear the burden of warming.

Vanuatu survived the Pacific Ocean’s first Category 5 hurricane three years ago, an event that drained almost two-thirds of its gross domestic product in a few hours. It’s been struck by four storms this year, and its national resources are suffering.

Islands want the full Conference of the Parties to adopt an "ambition package" at the close of this week’s talks on Friday or Saturday. It would deal with a laundry list of issues like loss and damage for unavoidable consequences of warming. It would also include language to elevate the message in this year’s landmark Intergovernmental Panel on Climate Change report that said warming must be kept to 1.5 degrees Celsius. Island nations also want a clearer "direction of travel" to more ambitious pledges, with countries urged to submit stronger ones in 2020.

It coincides with the climate agreement’s third anniversary today.

These topics are addressed in a statement obtained by E&E News that the Marshall Islands is circulating at the talks as leader of the High Ambition Coalition.

"We emphasize the need to strengthen our efforts to ensure an adequate response to the risks and impacts of climate change highlighted in the Special Report on 1.5°C," it states.

The islands and their allies in the Africa Group and the Least Developed Countries group are looking for alliances with larger nations. That’s especially true after a quartet of fossil fuel-producing nations — the United States, Saudi Arabia, Kuwait and Russia — joined forces to sink a motion last Saturday night to "welcome" the IPCC report (Climatewire, Dec. 10).

When the United States and its partners blocked the "welcome" motion from being adopted, entities as diverse as Argentina, the European Union, Norway, Canada, New Zealand and South Korea took to the microphone to show support for the Maldives, which introduced the motion.

While China remained silent, advocates believe the country will lend its support to the islands. China leads the so-called Ministerial on Climate Action, or MOCA, with Canada and the European Union. Chinese President Xi Jinping joined French President Emmanuel Macron on a declaration on climate ambition at the Group of 20 summit two weeks ago.

But while greens said yesterday that few oppose the so-called ambition package, none of the larger players have taken ownership of it.

"We know [support] is out there," said Catherine Abreu, executive director of Climate Action Network Canada. "But we’re not seeing it congeal into a strong coalition of leadership. We know that there are some parties who aren’t on board, so we need the parties who are on board to come together and be vocal in this space rather than being vocal outside of this space."

Mohamed Adow, international climate lead with Christian Aid, said yesterday that COP President Michal Kurtyka of Poland had not created "political space" for the "ambition" package on the COP’s agenda.

Countries have acknowledged that their first round of Paris pledges made three years ago put the world on a path to 3 degrees Celsius of warming. Scientists say that overshoots dangerous levels.

The Paris deal asks for renewed pledges every five years, but if Katowice fails to urge countries to improve their pledges in the next two years, that could cause this week’s talks to break down without producing a rulebook, Adow said.

"If we had a Katowice outcome that did not include an ambition outcome that formally invited countries to review and strengthen their NDCS, I can’t see how that is acceptable on the back of the latest IPCC report," he said, referring to nationally determined contributions. "The ambition mechanism is what makes or breaks Paris."

Advocates say Kurtyka has quietly tapped Costa Rica and Sweden to lead negotiations on issues that have fallen into the basket of "ambition." U.N. Secretary-General António Guterres has returned to the COP this week, and advisers say he’ll focus on breaking the gridlock on this section of the negotiations. Regenvanu said "ambition" should include loss and damage as well as science and tougher emissions pledges.

The Paris Agreement set a long-term goal of keeping warming "well below 2 degrees C," so parties must formally acknowledge the introduction of the new, more stringent 1.5 C temperature goal, she said.

She also said the U.N. Framework Convention on Climate Change’s place as the primary platform for global cooperation on climate change could be at stake this week.

"For this process to make sense as the primary multilateral forum for agreeing on cooperation to address this issue, then the IPCC report must be considered in its most appropriate light," Hayes said.

The alignment among the United States, Saudi Arabia, Russia and Kuwait isn’t seen by those gathered in Katowice as evidence of a conspiracy to undermine the Paris Agreement. The United States currently has a strained relationship with two of those countries. And even if they spoke ahead of last Saturday’s plenary, where they all backed language to "note" the report rather than "welcome" it, participants say that kind of on-the-spot consultation happens frequently at these talks.

"There’s a great amount of formal and informal bilateral discussion about these issues," said Reed Schuler, a former State Department official who now advises Washington Gov. Jay Inslee (D). Lead negotiators have broad discussions with other delegations in person and on email, he said.

The talks that kicked off in Katowice last week were given an unexpected boost when the G-20 summit in Argentina produced a strong endorsement of the Paris Agreement that hadn’t appeared in drafts of its closing declaration. It was signed by 19 of the nations, all except the United States.

Luca Bergamaschi, a former G-20 negotiator for the Italian government, said the United States could end up isolated this week if other countries hang together in the final outcome. Even Saudi Arabia and Russia didn’t join the United States in the G-20 to undermine the climate deal.

"It’s only so far the shortsightedness of the Trump administration to withdraw from the most important multilateral agreement of this century," Bergamaschi said, adding that the Saturday night pantomime might have been more about "tactics" for some countries than genuine national priorities.

Saudi Arabia has a long history of raising objections during climate negotiations. On Monday, it suggested that the U.N. body should postpone connecting science to the Paris deal until 2021, when the next IPCC assessment report is due.

Even if the United States is alone, it could kill negotiations here this week. But Camilla Born of E3G said it might not, for the simple reason that President Trump plans to pull the United States out of Paris, so raising the deal’s ambition is unlikely to affect his country.