Smith mum about his recent trip to the Arctic 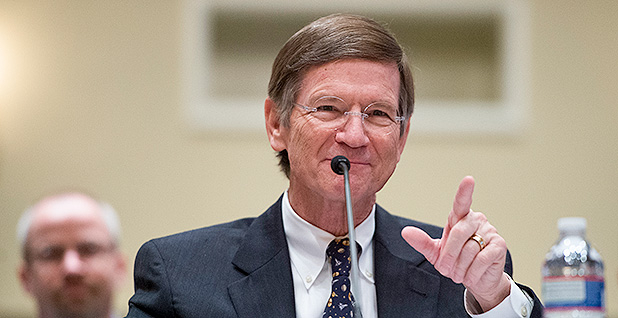 Republican Rep. Lamar Smith of Texas, a vocal critic of climate science, organized and led an expedition to the melting Arctic in May.

The House Science, Space and Technology Committee chairman has declined media requests for comment since Buzzfeed News broke the story last week, but that hasn’t stopped scientists and Democrats from speculating whether seeing global warming’s impacts up close could prompt a change of heart.

For the past four years, Smith has waged an aggressive campaign against what he calls "so-called self-professed climate scientists," voting to gut their federal funding and questioning their work and integrity (Greenwire, March 29).

Andrew Rosenberg, director of the Center for Science and Democracy at the Union of Concerned Scientists, said it would be hard for Smith to see parts of Greenland and Alaska and still question the impacts of climate change.

"Everything is affected by climate change, but no place more dramatically than in the Arctic," he said. "If you go there and say nothing is happening, it has to be because your eyes and ears are closed."

Smith was joined by both Republicans and Democrats on a May 8-14 tour through Greenland and Alaska.

The lawmakers, most of whom serve on Smith’s committee, were briefed by scientists on the front lines of climate change in a region that’s seen rapid sea-ice loss, melting glaciers, thawing permafrost and displaced villages.

They took an aerial tour of Greenland where retreating ice caps were unmistakable. The National Science Foundation prepared the trip’s itinerary.

Ranking member Eddie Bernice Johnson (D-Texas), who was invited but unable to attend the tour, said she was glad the trip took place as lawmakers seldom see firsthand the "importance of the policy decisions they are called to make in Committee."

"Every day our researchers are gaining invaluable information about our evolving planet and changing climate, and it is crucial for us to support this important research," she said in a statement prepared for E&E News.

"I hope that all the Members who participated in the Arctic trip gained this insight, and came back committed to supporting climate research. We shall see."

At least nine lawmakers, some of whom were accompanied by family members, traveled with Smith, who approved the trip and paid for it with congressional funding, Buzzfeed reported.

Smith was joined by Democratic Reps. Jerry McNerney and Ami Bera of California and Henry Cuellar of Texas. The Republicans were Reps. Neal Dunn from Florida, Chris Collins from New York, Frank Lucas from Oklahoma, Mark Sanford from South Carolina and Brian Babin from Texas.

The stated purpose of the trip was to conduct oversight of federally funded research investments in the Arctic, according to a Democratic committee aide, who noted no other specifics were given.

While oversight trips have become more infrequent since sequestration, when they do occur, they often fly under the media radar, sometimes because lawmakers travel without a security detail or they’re worried the trip could be misconstrued as a vacation, the aide said.

Michael Mann, a climate scientist at Pennsylvania State University who has exchanged barbs with Smith in the past, said it’s hard to know why Smith took the trip.

The Trump administration has called for an end to "duplicative" government programs and launched a reorganization of the federal government to streamline processes (Greenwire, July 10).

"I would like to think it means that he is open to reconsidering his views about the reality and threat of human-caused climate change," Mann said in an email.

"I am a firm believer in redemption. Were his views to change, so too would my assessment of him."

Smith’s office said he would not be available to comment by press time.

Rosenberg said if Smith did change his mind, he could use his position as head of the Science Committee to fight cuts to research programs. The administration has not made climate research a priority and could cut funding for various NOAA and NSF programs.

"I’m not sure if it was clear to the congressman or the whole [delegation], but there are many agencies involved in the work: NASA, NOAA, NSF," he said. "It’s not duplicative, it’s collaboration."

He added, "The collaborative model is very powerful, that’s how you do Arctic science."

It’s not unprecedented for Republican lawmakers to change their stance on climate, but there is often a political price.

Former Rep. Bob Inglis (R-S.C.) was elected to the House in 2004 but lost his seat in a Republican runoff in 2010 after speaking out against climate change denial and backing a revenue-neutral carbon tax.